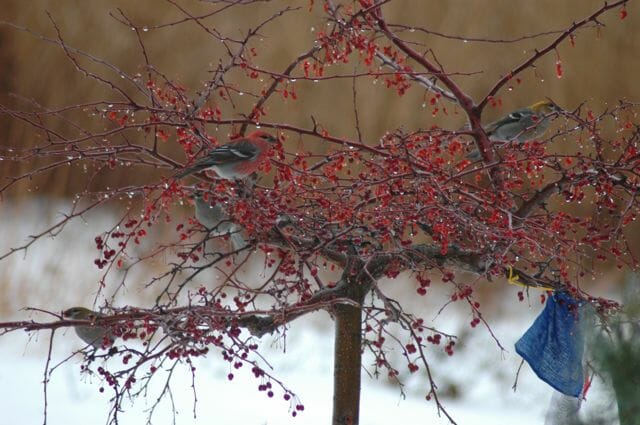 I LEARNED RECENTLY that I am one of tens of thousands of people each month who submit bird-watching checklists to ebird.org, a joint program of the Cornell Lab of Ornithology and Audubon. That number has been growing fast (and you can make it grow again if you sign up to help now). But why bother?

I count birds on ebird and with projects like FeederWatch (which runs every November through early April) because being a citizen scientist—that is being a real person without scientific training who collects and shares data so it can be used by scientists—is the only way the vast work of observing and recording the goings-on of the earth’s species can ever happen. Efforts by citizen scientists give experts a population baseline to work against to gauge impact when an oil spill or other catastrophe occurs. Data from citizen scientists has provided a basis for evaluating declines in populations and identifying which species are at highest risk (on the so-called watch list or in the annual State of the Birds report). It is important (and also immensely pleasurable).

Which points to the fact that some of the reasons I count birds are entirely selfish. I count birds because I find it relaxing and also exhilarating: the meditative aspect of just staring out the window or up into the trees from below; the ever-present possibility something unusual will happen and I will be there to see it.

I count birds because of their great beauty, and their hard-wired miracle of flight.

I count birds because I cannot imagine being alone in my garden without them, or their songs.

I count birds because even though they are virtually weightless—a robin weighs just 2.72 ounces, a black-and-white warbler a mere quarter or half an ounce—they can fly the length of a continent. And I count them and talk to them while I do so because they have personalities: Some species are gregarious (like the pine grosbeaks up top on my crabapple); others aloof (the brown creeper); some raucous (crows and blue jays), and others genteel (a tree swallow, until you make one mad by getting to close to its house full of nestlings).

I count birds because knowing them brings me joy.

Try it. (Or count dragonflies or bumblebees or reptiles or amphibians or mammals or starts or anything that moves you. You can even count rain—true, go see what I mean. Whatever you count, do count. The people with PhDs simply cannot do it alone.)

Categoriesbird sh-t
Tags
bird watching
Radio Podcasts
a way to garden podcast
Margaret's weekly public-radio show, from Robin Hood Radio in Sharon, CT, the smallest NPR station in the nation. Listen live at 8:30 AM EDT Mondays, to the replay Saturday morning, or stream the podcast anytime. LISTEN OR SUBSCRIBE FREE: Get the iTunes version; find it on the Stitcher app; or on Spotify, or your favorite podcast app. Browse past interviews below.
Podcast Archive

RESEARCH ON BIRD POPULATIONS published in fall of 2019 was alarming: 29 percent of all birds in the U.S. and Canada have vanished since 1970,..
Read More
u
September 4, 2016
5 Comments

I WILL MISS THEM, after the last hummingbird passes through the garden sometime in September, continuing its long trip southward, with me as just one..
Read More
c
January 23, 2017
16 Comments

I’LL TELL YOU MINE, if you tell me yours–and then how about we all tell eBird.org (or join the upcoming Great Backyard Bird Count), and..
Read More