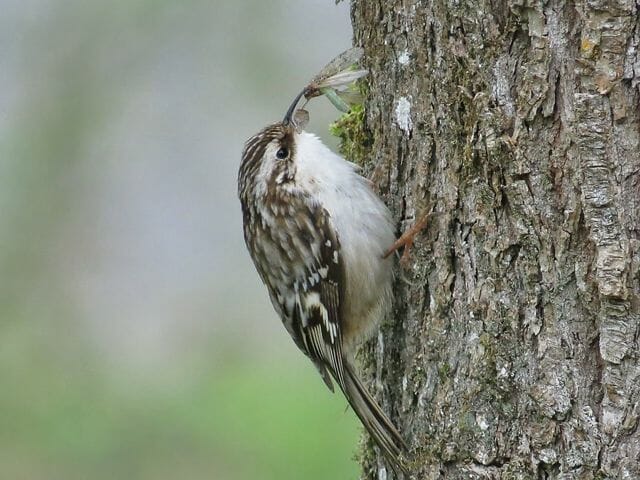 ‘ARE YOU SHOVELED OUT?’ It was Ellen Blackstone—my BirdNote.org friend. “Birds are happy that I’m packing feeders and keeping pools unfrozen,” I shot back. “And I got to say Happy New Year to my favorite sly and shy little friend, the brown creeper.”  To which she exclaimed, “Brown creeper!” and sent photos, plus a charming story of a woman who loved Certhia americana as much as I do. Here’s why:

The brown creeper is about 5 inches long (much of it tail!), but weighs just 0.2 to 0.4 of an ounce, or 5 to 10 grams—though it never lets being petite get in the way of business. With a beautiful voice and the best camouflage ever, it’s what I’d call a do-er. The brown creeper starts at the base of old trees—preferably with loose or shaggy bark—heading upward in search of insects and spiders. Once it reaches the top, it flies to the base to start again.

Hazel Wolf, a Seattle-based longtime activist for social justice, admired that trait when she saw the bird in action on her first birding trip, at age 64. The creeper’s determination inspired her to take on advocacy projects in behalf of the environment from that day on, until her death.

“I saw it work its way up the trunk, moving quickly, always up, up, up—then fly back to the base…” Hazel said (the full story is in this early BirdNote public-radio segment). “I realized how hard he worked for a living, just like me.

“Yes! I’m a birdwatcher,” she’d say, “because there are some birds in Washington, DC, that need careful watching!”

(And there still are. Oops–sorry for editorializing!)

“Hazel had her foot in three centuries–born in 1898, died in 2000, just as she had hoped,” Ellen told me last week.  (Read Wolf’s “New York Times” obituary.) “She worked with labor, the tribes, whomever, for social and environmental justice, and started 21 of the 26 Audubon chapters in the state of Washington. Amazing woman.” 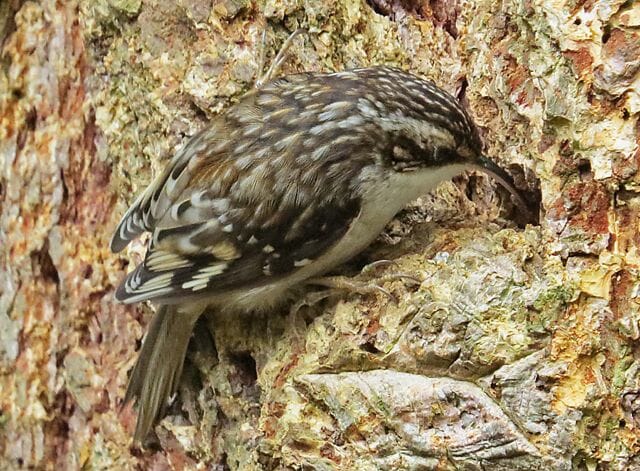 THOUGH THE BROWN CREEPER is resident throughout the United States, you won’t see it in places like my friend Ellen’s yard without large trees (the bigger the better). Outside my kitchen door, an ancient three-trunked Thuja with lots of peeling bark is made to order. You might think the brown creeper looks like a nuthatch, but typically nuthatches descend a trunk, while creepers ascend (on the best days, my big tree looks like a two-lane highway). Creepers normally make their nests in what is described as a hammock-like arrangement fashioned between tree trunk and a flap of bark. Though basically insectivorous (using their specialized, downcurved beak to explore the crevices in tree bark), they will visit suet or peanut butter feeders and eat some seed in winter. Cornell’s “All About Birds” brown creeper profile.

Meantime, listen to BirdNote’s latest podcast  by visiting their website, where you can subscribe to the podcast or RSS, free. More than 100 public radio stations playing BirdNote are listed here; if you like what you hear, why not ask your local station if they’ll carry it.

how birds find their food, with ellen blackstone of ‘birdnote’

I SPENT much of the summer transfixed by this year’s pair of phoebes who nested on the back porch as usual, and from a favorite..
Read More
b
September 26, 2013
18 Comments

YES, MANY HAVE FLOWN THE COOP—er, the local landscape—heading for milder spots to spend the offseason. But many other birds are arriving, settling in for..
Read More
b
January 30, 2014
7 Comments