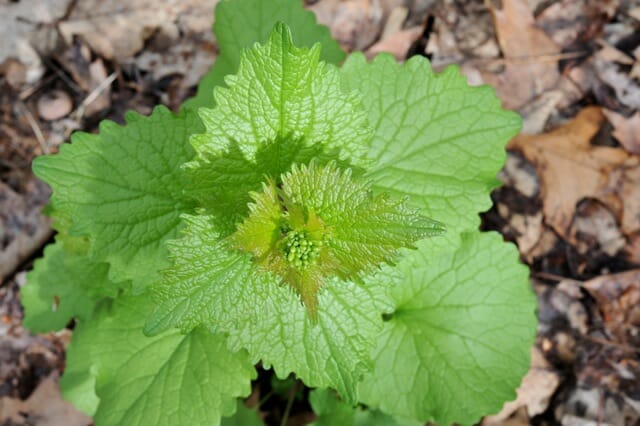 I KNOW A LOT OF PLANTS BY THEIR PROPER NAMES, but when it comes to “weeds,” as we term unwanted garden visitors that seem to just come with the territory, my knowledge really paled until recent years. Lately, on days not conducive to outdoor work, I’ve been studying up from some great weed-identification websites, so that I can finally address Alliaria petiolata (garlic mustard, above) with the proper (dis)respect.

I didn’t even remember the botanical Latin name for the ubiquitous dandelion, Taraxacum officinale, below, until I became a regular on the Rutgers New Jersey Agricultural Experiment Station “weed gallery” recently. What I love about the Rutgers weed tool, besides its general appropriateness for my garden regionally speaking, is that I can browse by common names or by thumbnail photos (or by Latin names if I ever know one). 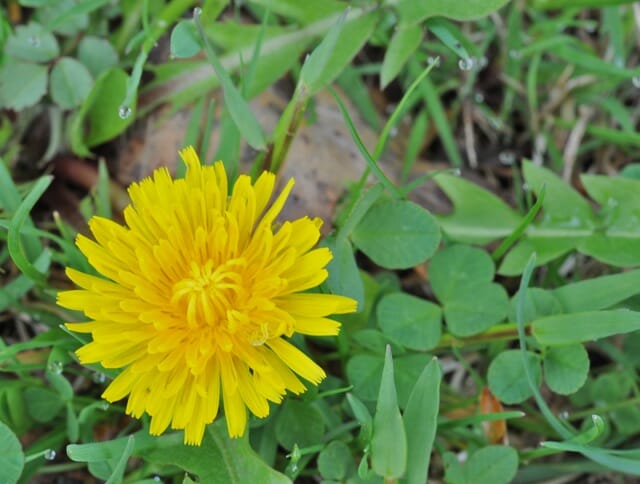 The University of Minnesota’s “Is This Plant a Weed?” tool is another place you’ll find me, narrowing the field of possibilities until I get an ID by clicking through a series of photo-based prompts (such as grass or broadleaf….upright or creeping…and so on). It almost makes weeds fun. (Note the almost.)

Steve Brill, the so-called “Wildman” forager who teaches in Central Park in New York City and elsewhere, has plant profiles of edible weeds on his website, if you’re hungry, with Brill’s advice you can serve up Japanese knotweed, dandelion greens and even plantain (though the latter’s not so tasty, below; Plantago major is better used on mosquito bites than on a dinner plate). 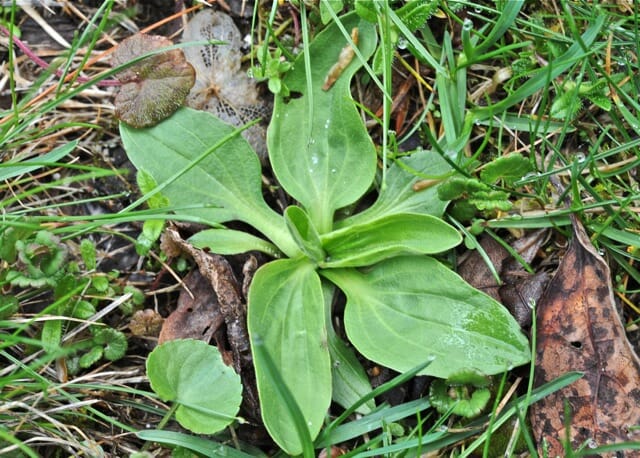 The University of California-Davis weed ID site is encyclopedic, and though I wish I could sort by images, once I get to them (on the plant profile pages) the information is some of the most detailed anywhere. They even show the weed in its seedling stage so you can eradicate it then without wondering if it’s your beloved self-sown something-or-other. See what I mean on a sample page (this one is bedstraw, Galium aparine, a common weed here as well).

With 172 species included, the University of Illinois has built an extensive weed database that’s browsable by common or Latin names, but with the added feature of filters (you can sort the list down to a certain flower color, for instance, or one of a series of very specific taxonomic keys, like leaf size, width, or the arrangement of the leaves. This one will get you sharpening your powers of observation.

Likewise, the Integrated Pest Management website of the University of California has a great weed reference database.

I own a number of weed guides, some more booklet-sized than book, and was happy to find a full-color one posted free online. “Weeds of the North Central States” is available as a sample PDF to “page” through, should you happen to live in them there states, and you can buy the whole thing for $5 here.

Want to know which ones are so bad they have made their names on the state-by-state “noxious weeds” lists? The real Bad Boys of Weed-dom. 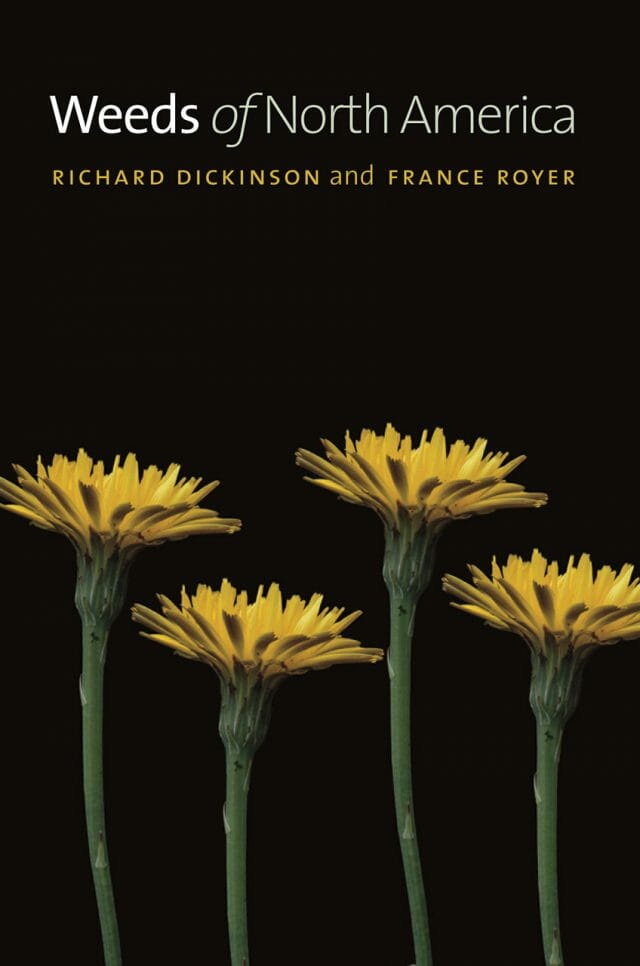 As many weeds as there are, there are apparently as many sources to learn about then, and if it’s old-school you want–with a full-fledged field guide at your side–I use this one (above), or most often of all the best one for my region, “Weeds of the Northeast” (affiliate link) co-authored by Richard Uva (below). I could go on, but then you’d think I’d grown a bit obsessed with weeds at the moment, wouldn’t you? 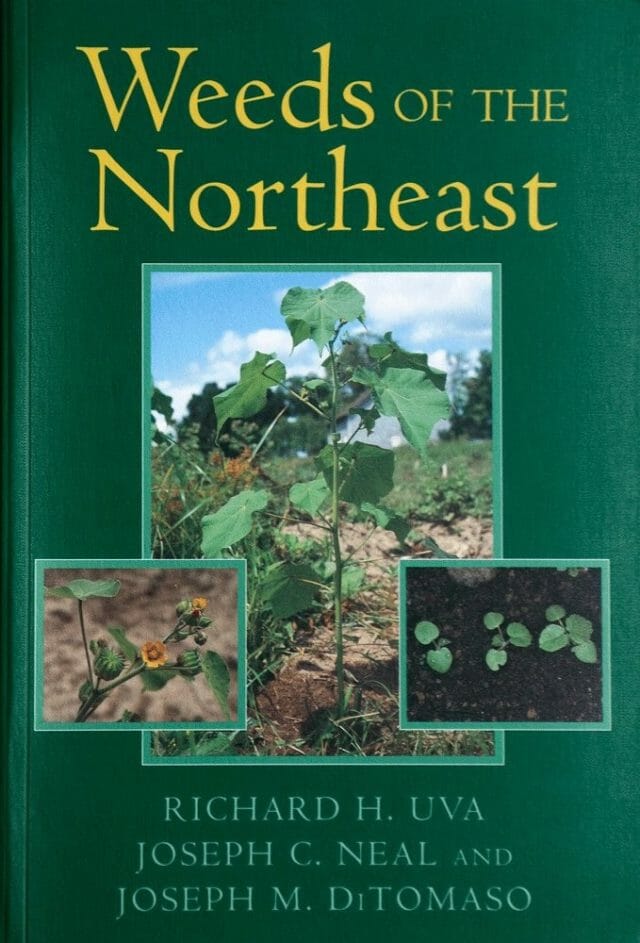 some of my first-name-basis weeds, and control ideas

CategoriesFeatured for beginners weeds
Tags
weed identification
Radio Podcasts
a way to garden podcast
Margaret's weekly public-radio show, from Robin Hood Radio in Sharon, CT, the smallest NPR station in the nation. Listen live at 8:30 AM EDT Mondays, to the replay Saturday morning, or stream the podcast anytime. LISTEN OR SUBSCRIBE FREE: Get the iTunes version; find it on the Stitcher app; or on Spotify, or your favorite podcast app. Browse past interviews below.
Podcast Archive

FINALLY: GOTCHA! For decades each summer I have pulled thousands of self-sown seedlings of a plant whose name eluded me, but whose habit and appearance..
Read More
n
June 18, 2013
75 Comments

I HAD TO LAUGH when I read that Galinsoga, a vegetable-garden weed I’m all too familiar with (photo above), is also known as “gallant soldier”..
Read More