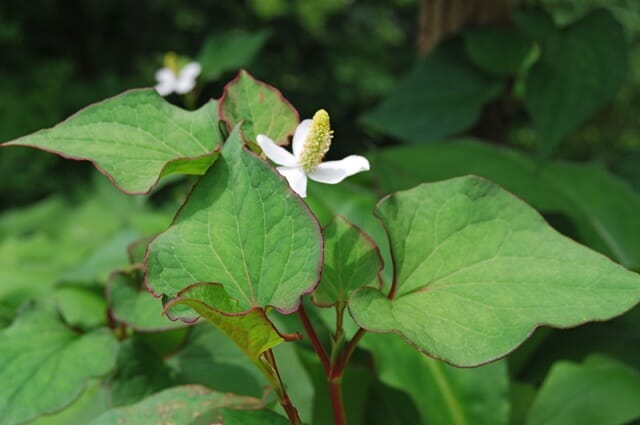 I HAVE KILLED MANY PLANTS in my gardening career, most of them unintentional and many of them regrettable. So why can’t I kill Houttuynia cordata, the so-called chameleon plant, despite years and years of trying?

I bought the plant more than a decade ago, for the showiness of its (then) variegated red, green and yellow foliage and its touted use as a groundcover in moist shade (including plunged right in a pot in water, apparently). Certain that I had acquired a treasure, I was terribly upset when it didn’t return from underground after its first winter with me. Dead, I reported in my newspaper garden column at the time. Gone.

It was another year before the chameleon turned on me again, and resurfaced. Its resurrection was cause for celebration. Not dead, not gone!

I guess you know the rest of the story if you’ve ever grown an invasive: It behaved for a moment or two, charming me thoroughly as if my latest gem, then proceeded to get thuggish (and lose its variegation, reverting to the stronger-willed green version).

Oh, no, I said, not on your life, as it overran pulmonarias and Hylomecon, goldenseal and trilliums at a gallop. Oh, no you don’t. Out came the fork and shovel, and after the seeming bulk was uprooted and sent to the trash, out came the sheets of heavy black plastic, weighted down with stones all summer long, as I tried to bake the remainder to death (called tarping; with clear plastic, it would be called solarizing).

By springtime: not gone, and a year later (by then two years beneath black plastic), still not gone. Four years of this treatment has done nothing but encourage it to travel farther and farther sideways underground.

Even if I wanted to use the herbicide glyphosate to stop it, I could not in this situation: The Houttuynia was growing under a big magnolia with fleshy surface roots, which would have taken up the chemical, too.

I am repeatedly forking out everything beneath there now, bagging and trashing it for fear of spreading snippets of the chameleon’s roots, and even tried turning the area to lawn. Mowing for a decade or so will probably kill whatever re-sprouts, right? Or not. I’m back to plastic as of 2015, and counting.

And so I ask you again: Why won’t this plant die? (Oh, and any botched murder attempts to confess?)

Categoriesannuals & perennials groundcovers organics shade gardening weeds
Radio Podcasts
a way to garden podcast
Margaret's weekly public-radio show, from Robin Hood Radio in Sharon, CT, the smallest NPR station in the nation. Listen live at 8:30 AM EDT Mondays, to the replay Saturday morning, or stream the podcast anytime. LISTEN OR SUBSCRIBE FREE: Get the iTunes version; find it on the Stitcher app; or on Spotify, or your favorite podcast app. Browse past interviews below.
Podcast Archive

update: why won't this plant die? (also known as, weeds i planted that will outlive me)

IT’S PRETTY ENOUGH, and nice in arrangements, but all I really want to say about gooseneck loosestrife is: Why won’t this plant die? It’s another..
Read More
w
September 2, 2017
24 Comments

IS IT TIME to take in the houseplants? That’s just one of the things I compared notes with Ken Druse on during the September session..
Read More
p
October 2, 2016
67 Comments

proper planting of trees and shrubs, with lee reich

IT’S OCTOBER and even in my Zone 5B location, where frost can come from late September onward, October and the first portion of November are..
Read More