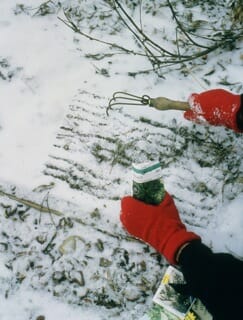 IT IS NEVER TOO EARLY to plant spinach, and in fact I often feel as if I am running behind on that score. Even though there are snow squalls predicted for later this week in my area, it’s time. Last September through Thanksgiving would have been even better. If I’d sown then, the little plants would have taken advantage of every thaw over these last months to put on a bit of growth, and I’d have harvested spinach in April (which is when most Northeners like me first sow theirs, much delaying gratification). In case there isn’t snow cover to insulate the babies, I put a floating row cover over the planting to tuck them in for the winter. Spinach loves the cold, and germination is patchy at best when the soil is hot.

I broadcast my seeds in blocks, but a more orderly effect can be had by spacing 4-inch-wide bands of seed about an inch apart, and repeating with some more bands every week or so. Baby leaves for salad can be clipped with scissors (after three weeks to a month from an early spring sowing) or harvest the whole plant, roots and all, once the plants mature (in just under five weeks for some varieties to about six for others). Careful, though: don’t let them go a moment too long. Spinach that has bolted isn’t a pretty sight. One kind I always grow is ‘Space,’ which resists the temptation to self-destruct that way longer than most. If you prefer Savoy leaves to smooth, try ‘Tyee’ instead.

Categoriesfor beginners from seed seed starting vegetables
Tags
vegetable gardeningvines
Radio Podcasts
a way to garden podcast
Margaret's weekly public-radio show, from Robin Hood Radio in Sharon, CT, the smallest NPR station in the nation. Listen live at 8:30 AM EDT Mondays, to the replay Saturday morning, or stream the podcast anytime. LISTEN OR SUBSCRIBE FREE: Get the iTunes version; find it on the Stitcher app; or on Spotify, or your favorite podcast app. Browse past interviews below.
Podcast Archive

how to grow spinach, with tom stearns

THE BOTANICAL ANCESTORS of our modern spinach–one of the most widely grown vegetables in temperate zones around the world today–were native to the Middle East,..
Read More
w
September 22, 2010
27 Comments

why i plant spinach late, and other tasty tidbits

OTHER THAN GARLIC, SPINACH IS THE LATEST food crop I sow here—and my earliest harvest reaped each spring. To celebrate the approach of fall, a..
Read More
8
February 3, 2018
251 Comments

NIKI JABBOUR’S ADVENTURES with oddball, unexpected edibles began when she grew a 5-foot-long snake gourd intended as an element of Halloween decorations. And then almost..
Read More