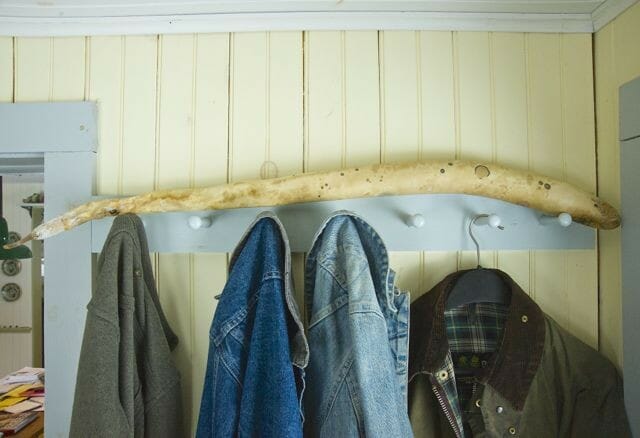 SOMEONE GIFTED ME a fresh-picked cucuzzi last September, a smooth-skinned, edible apple-green gourd shaped vaguely like a baseball bat. Where I grew up in Queens, cucuzzi dangled from some backyard trellises, and the name was pronounced “ga gootz”–the way a compaesano is a “goombah” in certain regions of Italy.

Though no Cucurbits (the family that gourds fit into) are Italian natives, they’re important in its cuisine, and its expressive language seems to fit these expressive plants, including some melons, squash and gourds that can attain dirigible proportion, with personalities as large.

I saw cucuzzi listed in Hudson Valley Seed Library’s catalog and called co-founder Ken Greene. “Want to talk about favorite crazy Cucurbits?” I proposed. It was an offer he couldn’t refuse. Here’s our rundown of some real charmers: 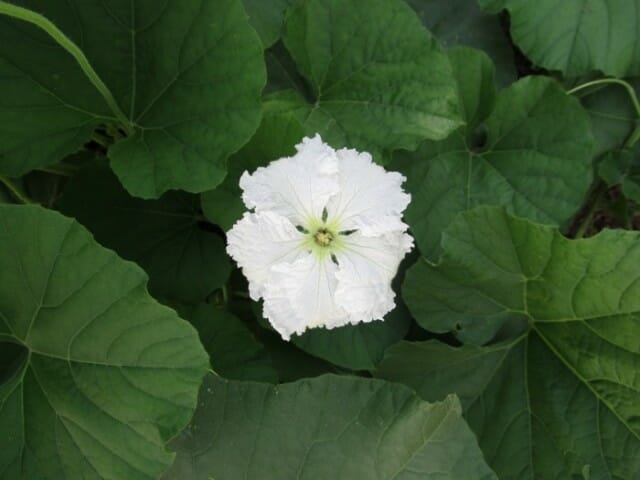 ‘WE’RE NOT USED to eating gourds–and don’t eat the 4-footers, even of this one,” says Ken, recommending harvesting cucuzzi for food use at perhaps 12 to 18 inches, and using like zucchini (though peeling is recommended). Cucuzzi (a.k.a. cucuzza, Longissima, Serpent of Sicily, Zucchetta, or one of many other names) is also a great ornamental plant, a lusty grower with beautiful, five-parted white flowers with frilly edges (above).

“If you’re looking for privacy screen or shade, some of our vines were 15-20 feet,” Ken says. If the fruits bump into anything while sizing up, you may get a more snake-like curled specimen, “but if you let fruit hang it’s amazing, even in our short summer season here in Zone 5B.”

I didn’t cook my gifted gourd, but haphazardly placed it up on a row of coat pegs in the mudroom, out of the way but up in the air (top photo), to see what became of it. It’s now hollow, tan and mottled, with a brittle skin but positively weightless—showing its true gourd nature. 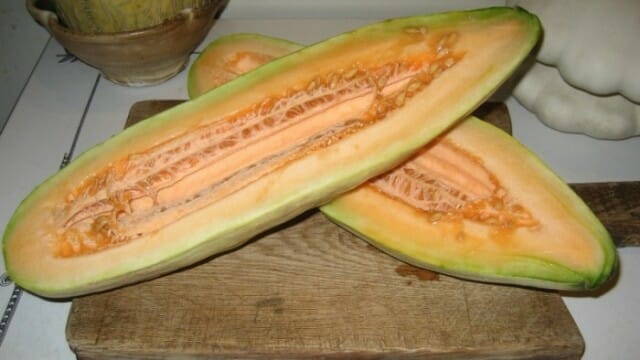 THE Banana melon (above) was one of the Seed Library’s first varieties, Ken recalls, back before he owned a seed company, when he was still a librarian at the Gardiner (NY) public library. With seeds like this heirloom melon, Ken created the first seed library in a public library in the U.S. by adding seeds to the regular library catalog.

“Every seed is a story,” he says, explaining his reasoning. “There’s the genetic story, which is sort of the non-fiction story, and then are these fiction stories about each seed, that might be a myth or a tall tale.” It all fit. Borrowers checked seeds out, and later returned some seeds they saved from that variety.

The Banana melon was one he found it in a 1910 or 1915 New York State catalog, and sought seed through the Seed Savers Exchange yearbook. “I grew it even though I detest melons, even the smell of them,” he says. “But it was a New York heirloom, and I was curious.”

One current Seed Library customer is especially glad for Ken’s discovery: Maybe five or six years ago, a handwritten letter arrived from Texas addressed to the Banana Melon Seed Company.

“And his letter found us,” Ken says. “I don’t know how he even located us in the first place, but he had such strong, nostalgic memories of this plant—it meant so much to him to find the seeds again.”

Every year the same man addresses a note to the Banana Melon Seed Company, so he can get fresh seed and grow it again.

“We’re proud to be the Banana Melon Seed Company for this customer,” says Ken.

The banana melon’s long ridges, like the darkened indent on the peel of its namesake, add to the banana-esque appearance. And you could even say it has a scent of the tropics. Ken’s partner Doug Muller, and Seed Library Sales and Catalog Manager Erin Enouen (not melon-haters like Ken) call it perfumey, and not like modern melons, which are just about sweetness. “It’s complex,” says Ken, “with no other like it.” 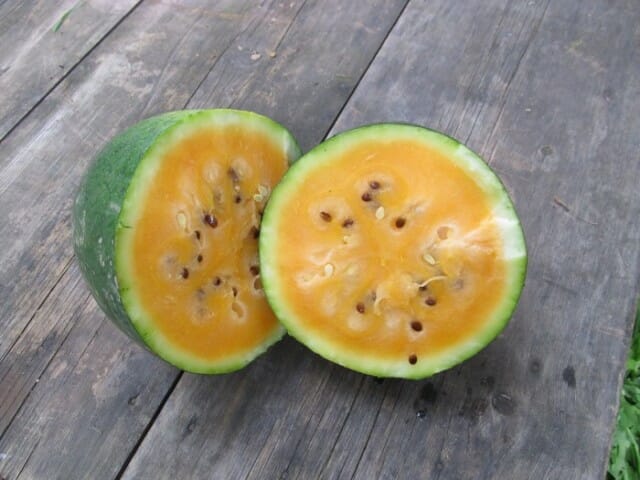 CRACK OPEN this watermelon to find a surprise: Apricot-colored, delicious flesh earned ‘Sweet Siberian’ the Seed Library staff’s rating as favorite of the 2014 season. Other assets: ‘Sweet Siberian’ isn’t a space-hog like some watermelons, producing its slightly oblong fruits on plants an average home garden can accommodate, and in time for those of us in short summer seasons, too. 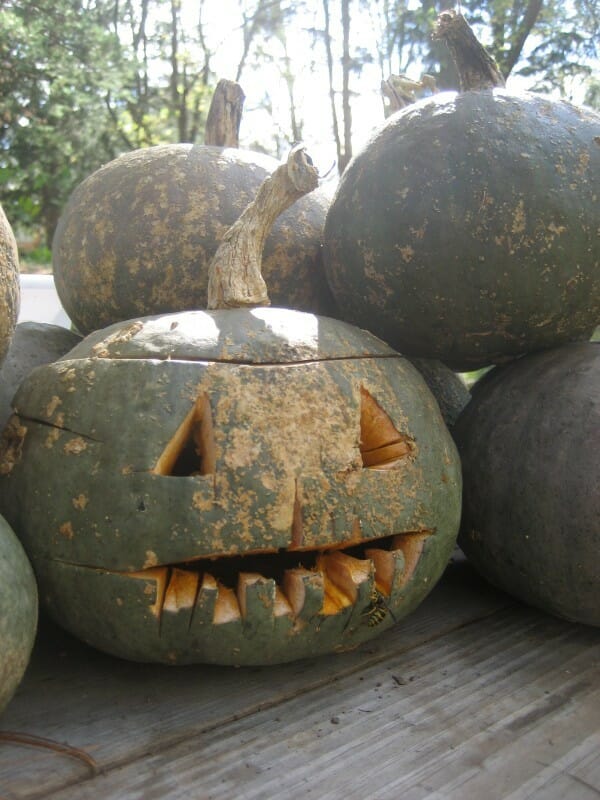 BLUE-SKINNED winter squash are personal favorites, probably because the first winter squash I grew was a ‘Blue Hubbard,’ endearing warts and all. Seed Library’s ‘Blue Kuri,’ a kabocha-type squash, is a treasure. And though not blue, exactly, its close cousin the ‘Black Forest’ kabocha is another standout choice for sweet, dry, fine-textured flesh.

“When you eat them you feel like you just baked a cake,” says Ken. “They have amazing sweetness and great flavor—meaning flexible in what you can do with them.” Plus: they’re open-pollinated, unlike most of the popular kabochas, which are often hybrids (so you cannot reliably save seed). And kabochas are dinner-sized.

“I love the ‘Long Island Cheese’ pumpkin,” says Ken, “but you have to commit when you’re going to grow one of those to make soup, freeze, and still put some up–versus the smaller-fruited ones that make enough but not too much (one is enough size).”

I guess my beloved ‘Blue Hubbard’ falls into the too-big-for-dinner category, but who can resist? 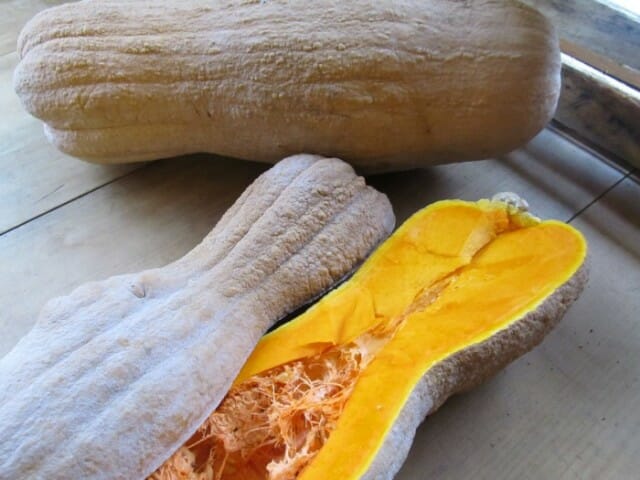 ‘Violina Rugosa’ (above), a rare Butternut type but with warty skin and an unusual violin shape, is also calling to me. 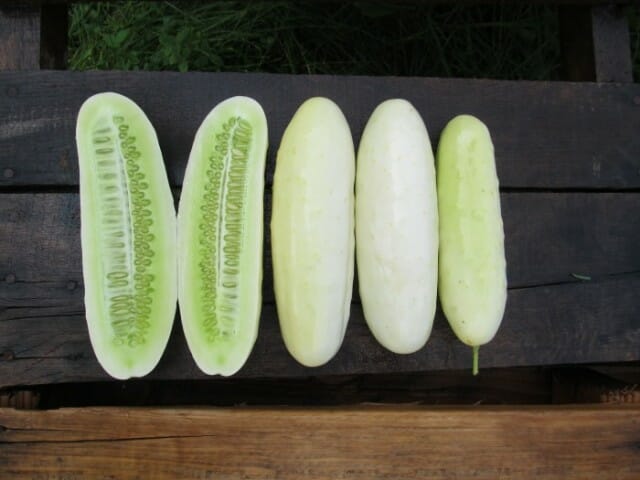 ‘YOU LOOK at a pale cucumber and you think, “Meh.” Is that going to be very good?” Ken admits. “But the texture of ‘Silver Slicer’ is great, the flavor is good, and the seeds are small and edible, no bitterness.” This creamy-white cucumber was bred by Cornell for powdery mildew resistance, so besides its visual and flavor appeal, says Ken, “it meets one of the challenges people have in their gardens.”

Serving suggestion: Make a gorgeous cucumber salad with this one and a green cuke like ‘Yukrainian Slicer’ that likewise has no bitterness, even in the heat. 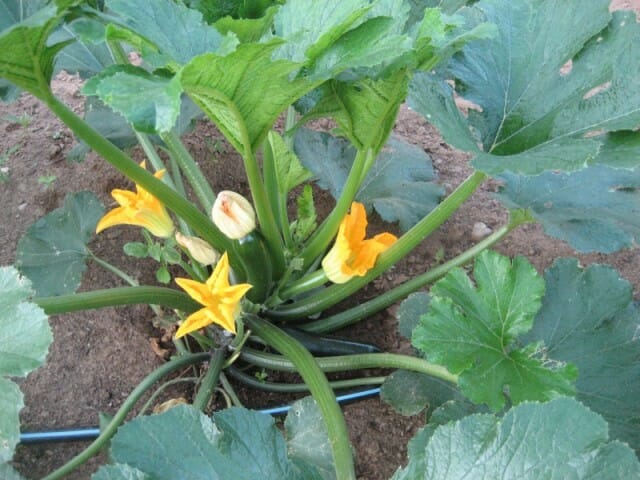 DEVELOPED in Humboldt County, in the far north of California, the original goals for ‘Dark Star’ were to create a drought-tolerant summer squash. “Even though drought isn’t our challenge in the Northeast,” says Ken, “the geneticist from Organic Seed Alliance who was advising on the project knew it had other qualities that would be useful—so we trialed it, and selected the best of the next generations for our region.”

Now, across the continent from its place of origin, ‘Dark Star’ bush zucchini is a Seed Library standby, with its distinctive leaf and stem architecture that makes any fruit that’s forming very obvious and easy to spot. “With zucchini that’s good news because you know what happens otherwise,” says Ken. Both the video and the photo above show that feature off.

Looking for a variety for big squash blossoms for stuffing? Ken recommends ‘Costata Romanesca.’ (I think ‘Tromboncino’ is a good choice, too.)

byoz: breed your own zucchini

SEED LIBRARY is both a retail seed catalog and a membership organization, and this year’s library membership focuses on BYOZ (Breed Your Own Zucchini). Members get 10% off all orders, plus this year’s membership kit, which includes a random mix of open-pollinated zucchinis, along with e-newsletters on how to create your own new variety. Details.

Categoriesedible plants from seed vegetables
Tags
seed series
Radio Podcasts
a way to garden podcast
Margaret's weekly public-radio show, from Robin Hood Radio in Sharon, CT, the smallest NPR station in the nation. Listen live at 8:30 AM EDT Mondays, to the replay Saturday morning, or stream the podcast anytime. LISTEN OR SUBSCRIBE FREE: Get the iTunes version; find it on the Stitcher app; or on Spotify, or your favorite podcast app. Browse past interviews below.
Podcast Archive

MY BEANS AND LETTUCE replant themselves most years, and when some sprouted recently—volunteers, but who knows what they’d produce in the end—it got me thinking: ..
Read More
h
March 15, 2015
332 Comments

how to grow squash, cucumbers and other cucurbits, with tom stearns

WITHOUT THEM, there would be no proper pickles, no pumpkin pies, no ratatouille. The melon-baller would sit idle, summer fruit salads undermined. Cucurbits are favorite..
Read More
w
November 30, 2008
8 Comments

warts and all: the ‘bule’ gourd gang

I SEE PERPETUAL, DEEP LAUGHTER IN GOURDS. For that reason, all are welcome at my place; in fact, one moved in with me a few..
Read More