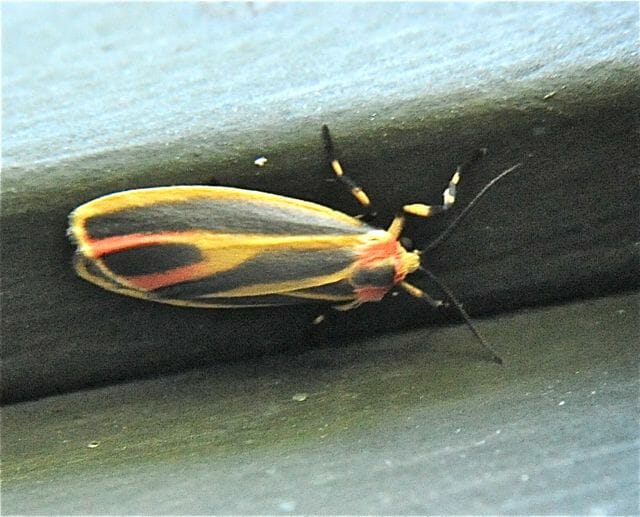 IT WAS 90-SOMETHING DEGREES OUT, but the lichen patterning on one patio stone looked like snowflakes, and I took a photo. That morning, I had shot another picture, of an insect I didn’t know. When it got so hot out later, I went inside to key it out and found that nature had served up another miracle: I’d met my first lichen moth within hours of taking that “snowflake” lichen image. I knew right away who to ask about the moth, at least: Seabrooke Leckie, co-author of the “Peterson Guide to Moths of Northeastern North America.” Learn some amazing facts about these specialized moths–why they paint themselves in flame colors, for instance, and how they have become expert “poop flingers” (I kid you not!)–and maybe win a copy of a favorite guidebook I turn to all the time in summer.

My new acquaintance (top photo) was Hypoprepia fucosa, the painted lichen moth, one of a group of mostly bright-colored insects listed in the guide as lichen moths.

First I refreshed my memory a bit on lichen, of which there are three kinds: those that grow on trees or shrubs (epiphytic types); others that grow on the ground (terrestrial); and ones like those on my terrace—rock-dwelling, or saxicolous lichens. The painted lichen moth doesn’t have a relationship with that lichen on my patio stones, but rather with the epiphytic types, I quickly learned, but I wanted to know more, and dashed off a series of questions to Seabrooke (who with the Northeast moth guide collaborator David Beadle is currently working on a Southeast volume):

Q. What is this group of moths’ relationship to lichens, anyhow?

Most of the time, when a moth species has a plant included in its common name, it’s because its caterpillars feed primarily or sometimes exclusively on that plant. In the case of lichen moths, their caterpillars feed on lichen and sometimes blue-green algae. Certain members of the group can also be cannibalistic on smaller individuals of their own species.

Q. Any idea why they are so colorful? (Doesn’t seem like they’re trying to hide from predators with those outfits on, but I know it must aid survival somehow and isn’t just a fashion statement.)

A: You’ll notice that the lichen moths, those that are colored, are mostly yellow/orange/red and black. Typically in the insect kingdom this combination of flame-family colors with black is an indication of distastefulness–a visual warning to potential predators not to waste their time.

Such coloration is termed “aposematic.” Usually, this unpalatability is because the insect contains chemicals that it ingested and metabolized as a larva and retained through metamorphosis into an adult.

Perhaps the best-known example of this is the monarch butterfly, which gets alkaloids from milkweed. Some species “piggy-back” on predator recognition of these distasteful species through mimicry–for instance, the viceroy butterfly looks similar enough to the monarch to gain that protection.

It’s unclear whether the lichen moths are the former or the latter, although at least one species–the black-and-yellow lichen moth (Lycomorpha pholus)–is a mimic of distasteful net-winged beetles, and members of the very closely related and similarly aposematic tiger moth group are unpalatable.

Q. OK, I have to ask: I have read about projectile pooping (my unscientific term!) by caterpillars. What’s up with that?

A: If you hold a caterpillar in your hand for long, there’s a good chance it will poop on you. But the poop isn’t messy–it’s in compact, dark-green pellets.

Some species of lichen moth, including our relatively common scarlet-winged and painted lichen moths (Hypoprepia miniata and H. fucosa, respectively), are expert poop-flingers as caterpillars.

They have a specialized “comb” that folds under their body at their rear end; when they need to fling a pellet, they force haemolymph (insect blood) into the last body segment which causes the spring-loaded comb to pop out and eject the pellet–it can be tossed as far as 30 body lengths away. This behavior is believed to be intended to foil parasitic and predatory wasps and flies that hone in on prey using the volatiles (evaporating chemicals) in the pellets.

Q. Remind me about why some caterpillars are so hairy—what purpose(s) do the hairs, which can be pretty dense, play?

A: Lichen moths, along with the closely-related tiger moths, and the not-so-closely-related tussock moths, have hairy caterpillars (usually, though not always, densely so). These hairs are typically urticating–that is, they irritate soft membranes (like mouth linings) or sensitive skin. It’s another defense against predation.

When they’re building their cocoons to pupate, the caterpillars will incorporate these hairs into the cocoon’s structure, binding them together with silk. A few species of lichen moths build very elaborate structures that look less like a cocoon and more like a cage. (Some great examples here.)

They carefully bind the hairs together in straight lines, forming a loose grid that arches above the pupa; the pupa hangs suspended from silken threads in the middle, equidistant from the sides, and far enough in that parasitoids can’t reach it through the cocoon to lay eggs. The hairs at the top and bottom ends point outward and aren’t bound together, which acts as a sort of reverse fish trap–when the adult moth emerges, it can easily push out of the structure, but nothing can get in.

how to win the field guide to moths 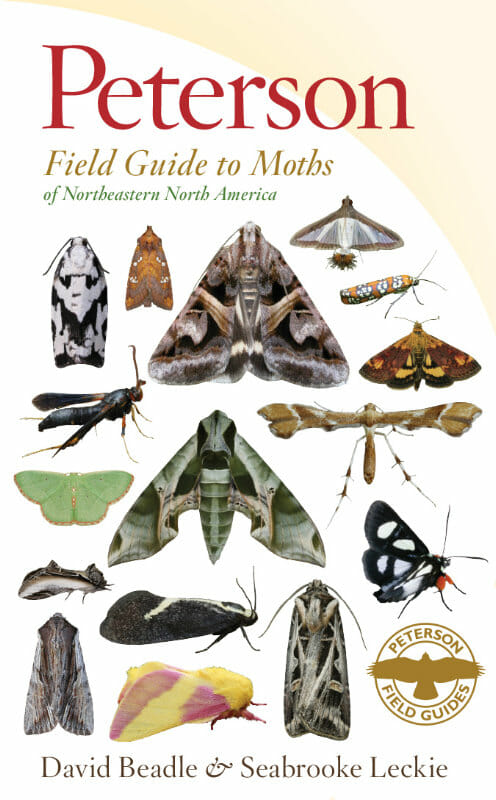 I’VE BOUGHT AN EXTRA COPY of the Peterson’s Northeast moth guide to share with a lucky reader. All you have to do to win is answer the question:

Where are you in your relationship to moths? I know, I am being a little flip–but here’s what I mean: Is “moth” still synonymous with “nondescript tan pest in the pantry or sweater drawer, and flying around the porch light at night,” or have you noticed anybody more distinguished yet?

Since I got the moth guide when it came out last year, it has changed the way I define the word “moth” completely.

Don’t have a moth story, but want to win the book? Just say “count me in” or something like that, and I will. I’ll draw the winner at random after entries close at midnight Sunday, August 18. Good luck to all.

Categoriesinsects & worms mushrooms & other fungi
Radio Podcasts
a way to garden podcast
Margaret's weekly public-radio show, from Robin Hood Radio in Sharon, CT, the smallest NPR station in the nation. Listen live at 8:30 AM EDT Mondays, to the replay Saturday morning, or stream the podcast anytime. LISTEN OR SUBSCRIBE FREE: Get the iTunes version; find it on the Stitcher app; or on Spotify, or your favorite podcast app. Browse past interviews below.
Podcast Archive

what lichens are telling us, with dr. james lendemer

IF YOU HAVE QUESTIONS about lichens, you call a lichenologist. And so I did—in behalf of worried readers asking what to do about lichens growing..
Read More
g
June 13, 2012
233 Comments

giveaway: new ‘peterson field guide to moths’ and why to get out and go mothing

I ONLY GOT TO PAGE 5 of the new “Peterson Field Guide to Moths of Northeastern North America” before I was hooked.  “Moths are everywhere,”..
Read More
w
April 29, 2018
162 Comments

why moths matter (and how to get to know them), with seabrooke leckie

IT WAS ALMOST SIX YEARS ago to the day that I had my moth epiphany thanks to Seabrooke Leckie, who in 2012 co-authored the “Peterson..
Read More