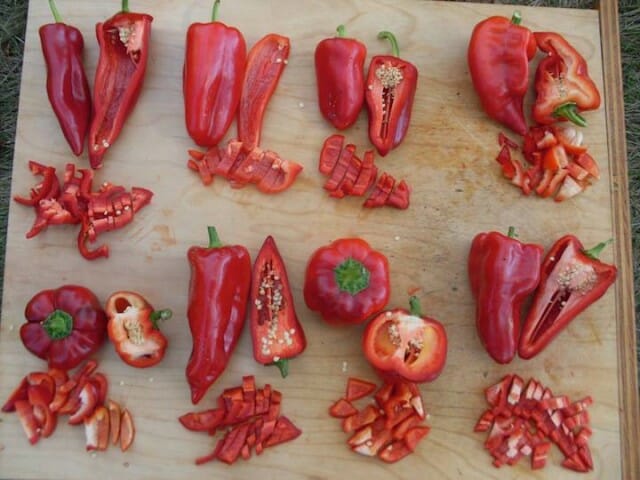 SOMEWHERE LIKE MEXICO might come to mind first, if the question asked is about the places that peppers originate from. When the answer you get is “Denmark,” though, things get interesting.

And that’s where the seed for ‘Liebesapfel’—the pepper that began Sarah Kleeger and Andrew Still’s fast-growing Capsicum annuum collection—arrived from, or more specifically, Germany via Denmark. 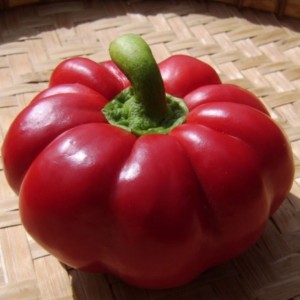 On their first Seed Ambassadors trip to search out potentially Northern-adapted seed from Europe in 2006, Sarah and Andrew carried ‘Liebesapfel’ (left) back to the New World themselves—though admittedly to their Oregon farm that’s far north of the species’ native range in the Americas. Soon after, when they founded the Adaptive Seeds catalog, the pepper was on their first list of offerings.

‘Liebesapfel’ is the kind of pepper that makes you smile: a ruffled, squat red pimento type that’s sort of the miniature cheese pumpkin of peppers, shape-wise. “It was the first one we got, and we fell in love with it,” says Sarah. No wonder.

The seed, shared along with other treasures by the couple’s friend Søren Holt of Frøsamlerne, the Danish seed-saving organization, had originally been developed by a small seed company in Germany. ‘Liebesapfel’ is very early to ripen, at about 70 days—and that’s no accident.

Those years in Europe helped, and especially in the Danish climate, says Sarah, who describes Denmark as “a bump in the sea where it’s often gray, windy and cool.” 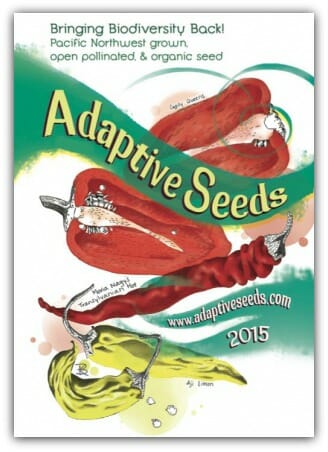 It was good practice for what the pepper would experience in its new homeland with Adaptive Seeds, where it now shares the pages of the 2015 catalog with 16 other peppers, both hot and sweet.

‘Gypsy Queens,’ is one that Andrew is working on “dehybridizing,” which involves sowing seed of a hybrid variety, seeing what you get, and gradually selecting in hopes of establishing a stable open-pollinated variety (whose seed will reliably come true when saved year to year, unlike the original hybrid). He’s also doing this with some tomatoes, and a pac choi. (My interview with Joseph Tychonievich delved into dehybridizing deeper.)

Another of the peppers, Adaptive Early Thai Grex, is genetically more like a population, says Sarah, diverse and purposely maintained that way, but with a theme (such as earlier ripening).

And the peppers at Adaptive fit a range of culinary uses:

A rich-flavored and bright-colored Hungarian sweet version like ‘Bácskai Fehér,’ is a standout for fresh eating (left). It’s also suited, Andrew learned in the kitchen last harvest season, to making ajvar, a Serbian pepper paste-like relish served as a spread or side dish. A number (including all these) are easily dried and powdered into paprika—from sweet to hot, hot, hot—including ‘Maria Nagy,’ a long, thin hot pepper that “looks like a cayenne but tastes altogether different,” and was the second Capsicum they acquired.

‘Pointy Kaibi #1’ “might not win the taste test for fresh fruits, but it smelled really good,” Sarah recalls—and wasn’t as juicy as others. Those qualities pointed to the potential for paprika that proved irresistibly delicious. The jar they made at harvest season? Already gone. Kaibi is an early-to-ripen Bulgarian heirloom, and one of Andrew’s favorites, shared with him by a Welsh seed company.

Horn-shaped hot little red peppers in the catalog—whose whole 2015 features peppers (order a copy, or browse it online now in a pdf)—hail from Thailand, and Korea, and even Transylvania. The famous, not-too-hot New Mexican chile from Chimayo, so good and important as a source of chile powder that it is listed in the Ark of Taste as a threatened American food tradition. 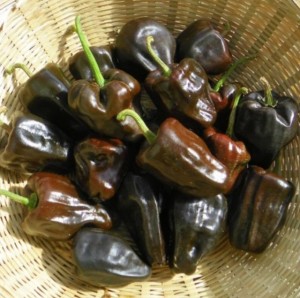 And what about the dark brown, “chocolate” pepper called ‘Chilhaucle Negro,’ I asked? It’s so stunning-looking (photo at left).

“Well, that’s not a pepper from Denmark,” Sarah says of the pepper that stars in mole sauce, chuckling at the path of making selections that she knows lies ahead at Adaptive Seeds, to gradually get this one to fruit earlier. “It’s late, but so very good.”

how to grow peppers 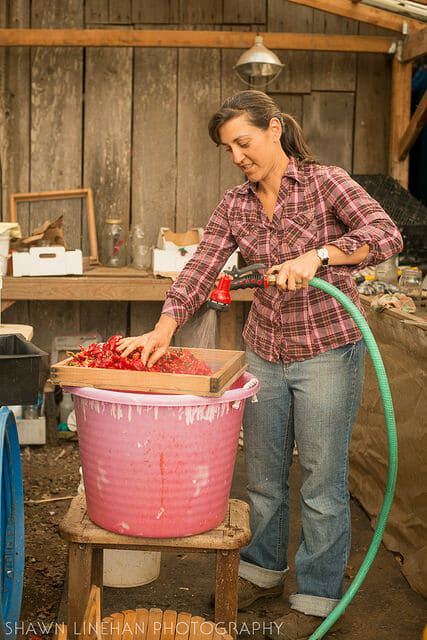 THE ADAPTIVE SEEDS CREW likes a big, sturdy seedling for transplant around June 1 in their Oregon fields. Counting back to about 10 weeks earlier, seed is sown in the greenhouse, using heat mats to help create the cozy conditions peppers crave until the seedlings are big enough to pot on to 4-inch pots.

Home gardeners can start under lights indoors, planning for about eight weeks inside, timed to transplant out one to two weeks after final frost. (My seed-starting calculator can help you get the timing right for your location.)

Ideally, pepper seedlings would be maintained at 70F daytime and 60F nighttime as they grow, but Sarah admits Adaptive’s unheated greenhouse in Sweet Home, Oregon, just isn’t that consistent.

“It can fluctuate a lot,” she says, “and even get to 80s by day and 40s at night. If you can keep them warmer than we can, they will like it much better. Our lack of good temperature control is probably the main cause of the frequent issues we have with aphids on the peppers.”

If the young plants start to flower in their pots, the blooms are pinched off, waiting until they are settled in the ground for the reproductive cycle to rally get under way.

A week or so before set-out date, begin hardening off the plants to adjust to cooler temperatures and general outdoors.

At transplant time, each plant gets a dose of Adaptive’s secret ingredient–fish-bone meal—in the planting hole. Their farm soil is Phosphorus-deficient, Sarah says, and the meal also helps add fertility and also seems to help prevent blossom end rot. Seedlings are placed in the holes at the same depth as they were in their pot, and plants are spaced 18 apart in the row, with 2 feet between rows.

They don’t stake or cage their peppers, Sarah says, but admits that having something like 100 plants greatly softens the potential blow if a couple suffer broken limbs, or topple under the weight of heavy fruit set.

“If I had only a couple of plants in my home garden,” Sarah says, “I’d be staking or caging them.” Maybe even with a Florida weave (a.k.a. basket weave), like tomato growers do?

Besides full sun, regular and thorough watering is essential for a good fruit crop, so all the pepper plants are on drip irrigation. The ones adjacent to emitters that get two to three waterings a week are more prolific than others where the dose is stingier.

Reemay tents, meant to exclude insects who’d perform unwanted cross-pollination between varieties–no worry for home gardeners, but a total loss for seed farmers–were just too hot inside for good pollination, so last year Sarah Andrew decided to stop using the fabric. And besides, Sarah says, “the plants under them were sort of out of sight and out of mind—not the best way to keep track of them.”

Swapping out the Reemay fabric for fine netting that would keep bugs out but not build up so much heat or hide the contents was another possibility, but instead, Andrew and Sarah calculated. Carefully, very carefully.

“We’ve calculated that we can have 11 isolations spaced 500 feet apart on our farm,” says Sarah, referring to the too-far-for-pollen-to-move recommended distance that can insure saveable seed. “So in the middle of nowhere around the place, we’ve set up some drip and now you come upon a random row of peppers.”

Though not thought of as a storage crop by any means, pepper fruits may prove surprisingly long-lasting, says Sarah, something she learned by accident.

“A lot of things we learn about hardiness and durability are about neglect,” she says. “We had an abundance last year of peppers, so a couple of cases, in wax boxes, went into the barn and got forgotten about until January. Many fruits, unexpectedly, were still good.” 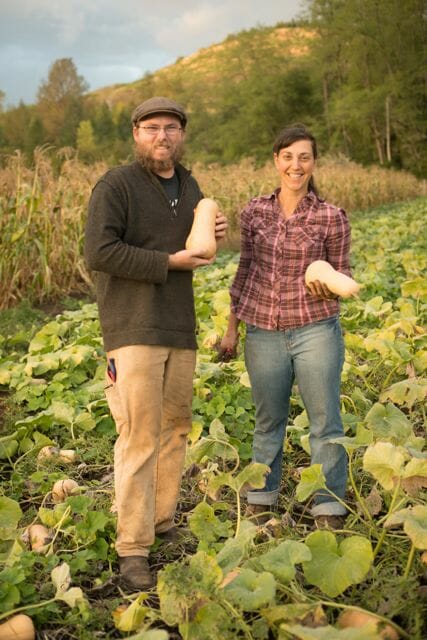 THE ADAPTIVE SEEDS team also has a passion for kale and many other crops. Read an interview from last year on some of their other favorite edibles, and also this piece with Sarah Kleeger on how to grow kale. All their seed is grown following organic practices, and is open pollinated. (Above, Andrew and Sarah with the squash harvest.)

Categoriesedible plants for beginners from seed organics seed starting vegetables
Tags
adaptive seedshow to grow
Radio Podcasts
a way to garden podcast
Margaret's weekly public-radio show, from Robin Hood Radio in Sharon, CT, the smallest NPR station in the nation. Listen live at 8:30 AM EDT Mondays, to the replay Saturday morning, or stream the podcast anytime. LISTEN OR SUBSCRIBE FREE: Get the iTunes version; find it on the Stitcher app; or on Spotify, or your favorite podcast app. Browse past interviews below.
Podcast Archive

how to grow kale, with sarah kleeger of adaptive seeds

‘ANYONE CAN GROW KALE,’ the seed farmers at Adaptive Seeds—who have collected kales from around the world and made them a specialty—said recently, seeming to..
Read More
g
April 9, 2016
172 Comments

DRY BEANS have been a mainstay of my diet for decades; the pantry’s always stocked with multiple kinds. But as possibilities beyond the basic Navy,..
Read More
a
January 14, 2014
359 Comments

WE’VE BEEN SEED-SHOPPING our way around the nation in my recent series on the radio and blog—and now we’ll head around the world a bit,..
Read More