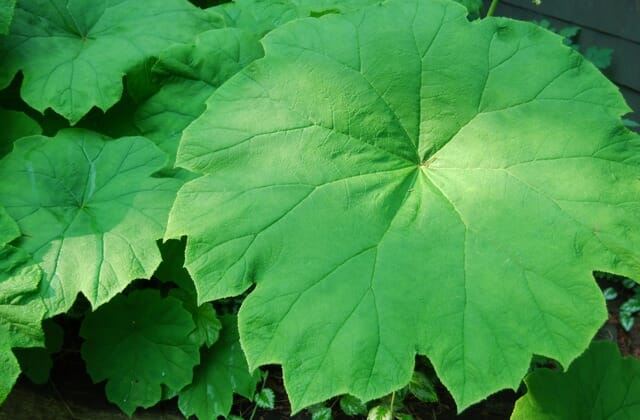 IF I WERE SHOPPING in the mail-order plant catalogs, and if I didn’t already have it, I’d order Astilboides tabularis, perhaps the most asked-about plant here during garden tours. I say “if” on both points because I am trying to practice restraint over here, so instead of buying things I’m pretending—and recommending them to you instead. Talk about armchair gardening. But there’s nothing virtual about Astilboides. It’s a shade-garden must.

With nearly 2-foot-wide, light green leaves on hairy stems that can approach 4 feet here, Astilboides tabularis is no shy thing, though it’s not a spreading thug at all. The stems attach in the middle of the leaf, so the foliage is held aloft like a small, round pedestal table—or some people say an umbrella. 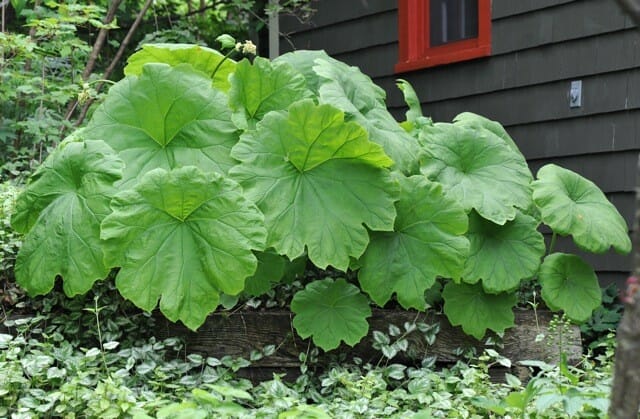 But its name is so descriptive, if you think about it: the tabularis part (meaning flat-topped, like a table), and even the genus name, Astilboides, since its flowers look like a giant creamy astilbe plume of sorts. Its “common” name (though I’ve never heard anybody say it) is shieldleaf. Make mine Astilboides. 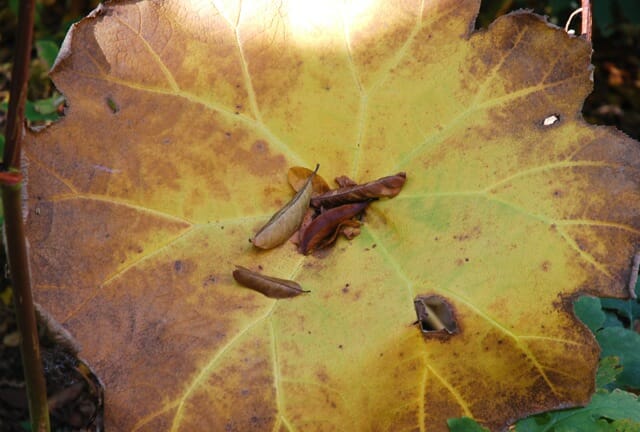 I brought my first clump home from a plant sale at the nearby Cary Arboretum, as it was then called, now the Cary Institute of Ecosystem Studies in Millbrook, New York. That was probably in the early 1990s. My original clump has been pilfered from to spread the beauty various times, but other than said pilfering and a late-fall cleanup, I don’t do anything to this plant. A tip: Don’t cut it back too soon. The way it fades is lovely, with yellow and tan phases worth enjoying as it relaxes on its way to sleep (above).

I find Astilboides easy to grow, as long as it has good, season-long soil moisture, a shady spot, and isn’t zapped by frost early in the going, as the leaves are starting to open. It’s the first thing I run to cover with an old sheet if we get a late frost, else its foliage gets tarnished, though it will send up more in time. Depending who you believe, it’s hardy from Zone 5 or even as cold as 3 to 9. Anyone have insights? I can guarantee Zone 5. 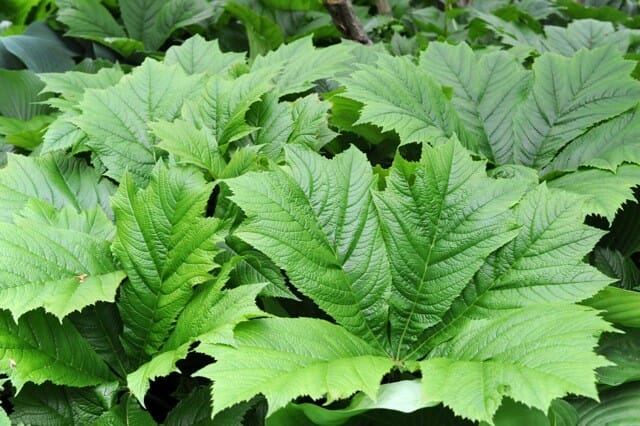 When I adopted it all those years ago, Astilboides used to be Rodgersia, and it’s a close cousin of that other genus of bold-leaved perennials that can help make even a cold-climate garden feel a little bit tropical. I brought some divisions of Rodgersia podophylla home on that long-ago day from Cary Arboretum, too…more on that beauty another day (photo above).

Categoriesannuals & perennials Featured shade gardening
Tags
shade perennials
Radio Podcasts
a way to garden podcast
Margaret's weekly public-radio show, from Robin Hood Radio in Sharon, CT, the smallest NPR station in the nation. Listen live at 8:30 AM EDT Mondays, to the replay Saturday morning, or stream the podcast anytime. LISTEN OR SUBSCRIBE FREE: Get the iTunes version; find it on the Stitcher app; or on Spotify, or your favorite podcast app. Browse past interviews below.
Podcast Archive

I SPENT PART OF THE HOLIDAY WEEKEND ADMIRING the bush clover, Lespedeza thunbergii (the purple cloud in my previous post), and another chunk of time..
Read More
a
February 23, 2019
61 Comments

IT GROWS IN SHADE, READS AS SOLID GOLD, and looks good from early May to sometime in winter, I think, faded to wheat-color and partly..
Read More
l
July 8, 2009
9 Comments

J UNGLE CONDITIONS NOTWITHSTANDING, some things are still standing here, and even looking good. I wanted to make sure to give each one its due..
Read More