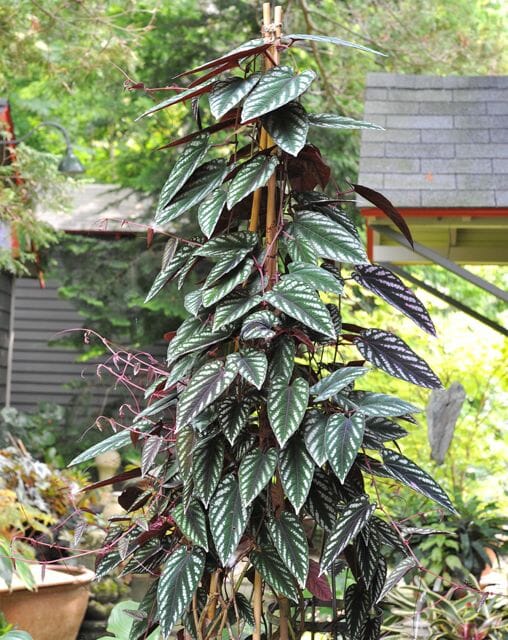 I GET ASKED TWO QUESTIONS a lot when people visit my garden: “Where did you get that plant?” and, “Where do you put all those big pots of tender things in winter?” (such as the giant Rex begonia vine, above). The answers to both questions lead back to one old friend in particular, Dennis Schrader, whose wholesale nursery on Long Island is where many of the favorite “investment plants” I try to carry over year to year put down their first roots, and whose expert overwintering advice I got on the latest edition of my radio show. Plus: Win Dennis’s classic book, “Hot Plants for Cool Climates.”

I called Dennis in late September, as my Zone 5B weather threatened to frost, because he has more experience with carrying over stock of tropicals and sub-tropicals than anyone else I know, after operating Landcraft Environments, a specialist in unusual tender things, since 1992. (Our conversation was the Sept. 23, 2013 edition of my public-radio show and podcast, and is summed up below with all his advice.)

The to-the-trade business, located on the North Fork of Long Island in Mattituck, resulted from what Dennis calls, “a hobby that went wild,” a love of houseplants that led him to school for landscape design and nursery/greenhouse management, and eventually to start a design business and then the wholesale operation with his partner, Dennis Smith. Bold, colorful foliage is a signature of the Landcraft online catalog (which you can use as an inspirational encyclopedia of plants worth lusting over, even if you can’t shop there directly).

“We’re kind of foliage-driven,” says Dennis, “and if I am going to do flowers, I don’t like fussy ones–so more dahlias” than something with less impact.

Just fine with me! 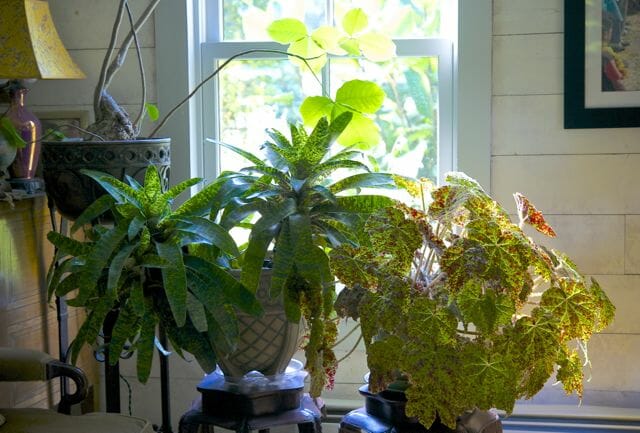 overwintering: the basics from dennis schrader

I HAVE BEEN EXPERIMENTING for years with stashing tender things into the cellar, garage, house, mud room…read: wherever I can…to try to carry them over from one year to the next.  There are several tactics to consider, says Dennis, depending on the plant, and your available protected indoor spots: 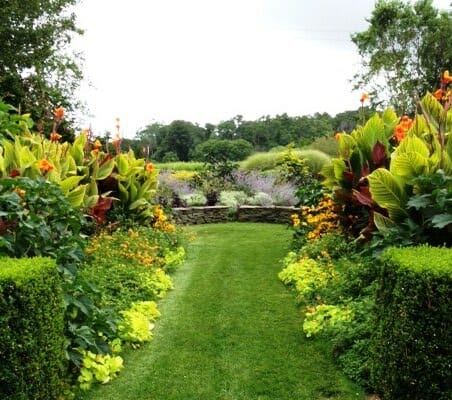 It’s a bit of an adventure, Dennis agrees, but as you have a success with one plant, apply the tactics learned to other things. “If you’ve succeeded with cannas, try dahlias, or gladiolas, or elephant ears—Alocasia or Colocasia.” His basic guidance:

“Think about the origins of the plant,” says Dennis, “and if it came from a Zone 8 or 9—or even warmer than that—they probably experienced a seasonal dry period there. So sometimes you’re simply mimicking a rest period, a dormancy.”

Aha! So go ahead: Snap up some tender beauty at the fall sales at your local garden center right now, and give it a try. You might turn a bargain into an investment plant. 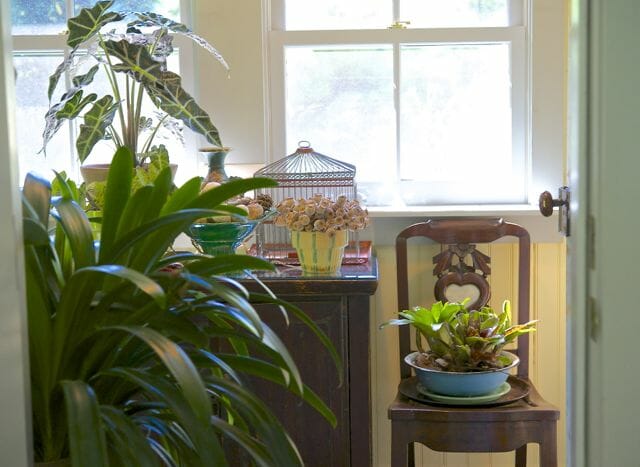 hot plants to collect, and store

SOME OF THE PLANTS Dennis Schrader and I talked about storing, on this week’s radio show (the link if you want to listen in):

Succulents: Succulents such as sedums, agaves, Echeveria, and even aloes are used to tough, dry conditions, and may prove willing to cooperate with being overwintered indoors. “Stick them by a sunny window,” says Dennis, “especially cool and bright if you have it.” Don’t overwater!

Bromeliads: These beauties are easily carried over as houseplants (I have had some for a decade; the young ones in the bowl in the photo above are tucked into my back mudroom with an elephant ear and a big old Clivia). Give bromeliads bright light. Like the succulents, Dennis says, you don’t have to keep the soil wet–in fact they don’t want “wet feet,” but rather to just fill the “cup” formed by their leaves with water.  Even the so-called “earth stars,” he says, or Cryptanthus, do well as indoor-outdoor subjects.

“One thing,” he adds: “Once a bromeliad blooms, the mother plant will start to die—so cut it off at the base and let the pups develop.” 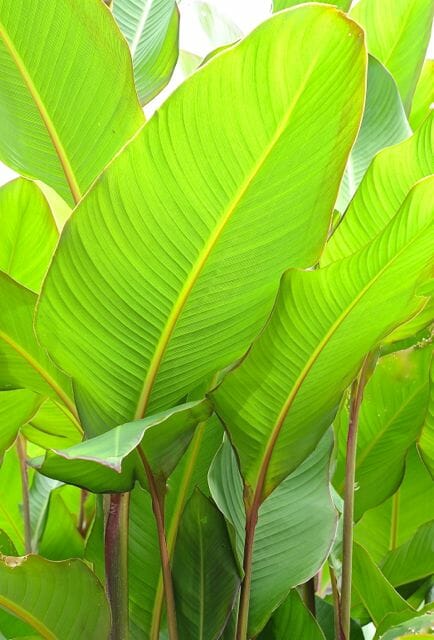 Cannas:  Easiest of all plants to overwinter, simply dig the tubers (cutting back the frost-blackened foliage) and stash them in the cellar or a garage that’s frost-free; unpotted is fine. (That’s ‘Musafolia’ or ‘Grande,’ above.)

Amorphophallus, or voodoo lily, grow from a tuber, and though most species are not hardy north of Zone 8ish, they are easy in pots. Simply let them dry off all winter, such as in your basement. I don’t even unpot mine, but you can. Bring out and water again signs of life begin, or around May for me.

Eucomis, the pineapple lilies, aren’t reliably hardy in my Zone 5 garden, so I grow them in pots, which I simply haul into the basement as with the voodoo lilies. Dennis grows a range of Eucomis in the ground in his Zone 7ish garden, and lately Landcraft is offering them for sale.

Bananas: Dennis tells a story of a friend with a banana, Ensete maurelii, specifically the big red Abyssinian banana, which gets to about 15 feet tall.

The friend didn’t know where to store it, “so he bare-rooted it–made it look like a leek by cutting off all the leaves and trimming its roots and then let it sit under his dining-room table all winter.”  (I’ve dragged them, pot and all, onto the cellar floor–as I have Brugmansia. Not pretty, but it works. Again: remember you’re sort of simulating the seasonal dry period of their native land. Don’t feel cruel!)

Acalypha, or copperleaf plant: “Acalypha tend to get a little leggy,” says Dennis, “so it’s best to keep them in a bright location and as humid as possible, and then cut them back in the early spring and get a flush of new growth. They are prone to spider mites, so be on the lookout.” 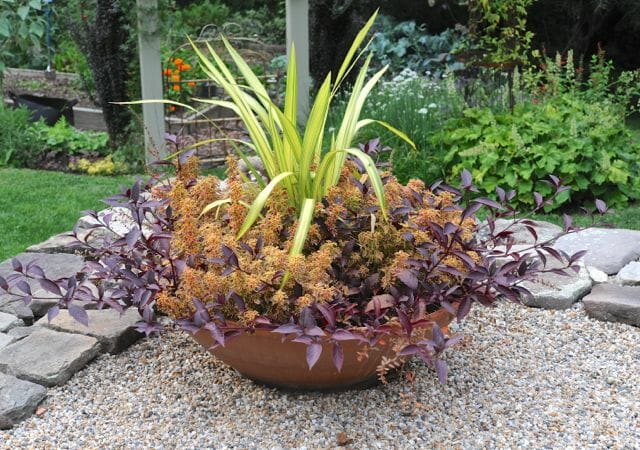 Coleus: “Coleus can do just fine inside as a house plant as long as they are not too big. Best thing is to take cuttings, and root them over the winter.” (That’s a fine-textured coleus from Landcraft called ‘India Frills,’ above, in a giant bowl on my patio, with a spike of gold Phormium and purple-leaved Alternanthera spilling over the edge.)

Alternanthera: “Alternanthera is also known as Christmas clover,” says Dennis, “and will bloom with small white clover-like blooms if brought in over the winter. It will get a bit scraggly so cut back after blooms fade in January-February. (That’s Alternanthera dentata ‘Rubiginosa’ spilling over the pot edge, above.)

Phormium:, or New Zealand flax, and Cordyline are dramatic, linear plants–but I have never made my Phormium investments (like the yellow spike in the pot above) happy for more than a year or two by resting them in my too-dark cellar, I confessed to Dennis.

“They can take it very cold—like into Zone 7,” says Dennis, though they are evergreen and always in active growth, even if very slow. If they can’t make it with heavy mulch in your garden, he recommends, try them very cold and very dry, with some light. I’m going to try some in a bright mudroom this year, and others inside my very well-insulated but not heated garage, by a window. Why not?

Cissus discolor, or Rex begonia vine: This lusty vine, a grape relative, grows to a dozen feet or more in a season (as in the photo)–far too big to lug indoors.

“Try it as a houseplant in winter,” says Dennis, “but thin it back and cut it back pretty severely,” reducing the number of leaves, he says, to let in light and air. Yes, it seems brutal, but no worry. It will push new growth in later winter.

WHAT? Your local nursery doesn’t sell “hot plants for cool climates” from Landcraft Environments? Here’s how to find out if they do (list of retailers)…and if not perhaps they might in the future, so go ahead: nudge them! Again, have a look first at the Landcraft plant list to whet your appetite.

how to win ‘hot plants for cool climates’

I’VE BOUGHT TWO COPIES of Dennis Schrader’s and Susan A. Roth’s “Hot Plants for Cool Climates” (Amazon affiliate link) to share with you. All you have to do to enter is answer this question in comments below (UPDATE: the giveaway is complete): 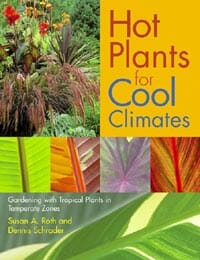 What’s plant (or plants) do you feel like you know how stash successfully, even though it’s technically not hardy in your garden zone?

Feeling shy, or have no answer? That’s fine; just say “Count me in” or some such, and I will.

I’ll draw two winners at random after entries close at midnight on Monday, September 30, 2013. Good luck to all!

Categoriesannuals & perennials bulbs container gardening garden prep houseplants how-to ornamental plants radio podcasts types of gardening
Radio Podcasts
a way to garden podcast
Margaret's weekly public-radio show, from Robin Hood Radio in Sharon, CT, the smallest NPR station in the nation. Listen live at 8:30 AM EDT Mondays, to the replay Saturday morning, or stream the podcast anytime. LISTEN OR SUBSCRIBE FREE: Get the iTunes version; find it on the Stitcher app; or on Spotify, or your favorite podcast app. Browse past interviews below.
Podcast Archive

I THINK OF THEM as investment plants, plants that might not be hardy where I garden, but that with a little extra work and the..
Read More
t
November 2, 2013
12 Comments

I KNOW, IT CAN FEEL OVERWHELMING: How will we ever tuck it all in for the offseason, battening down the botanical hatches “in time”? Particularly..
Read More
m
October 1, 2012
8 Comments

OCTOBER IS A JUGGLING ACT: last call for so many chores up North here, but which balls can we keep in the air concurrently? Quick,..
Read More