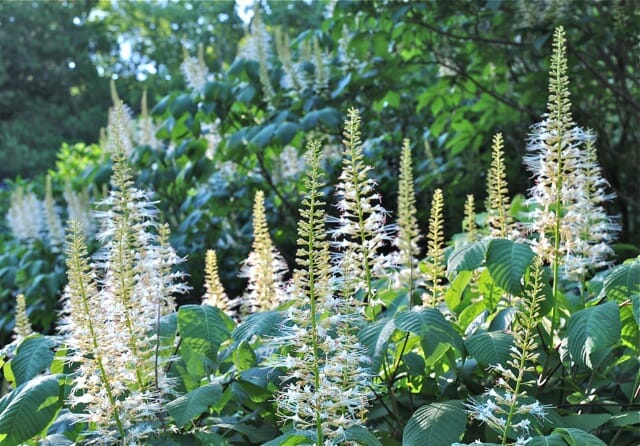 IT FELT LIKE SUCH A BIG SCORE the day decades ago when I found the bottlebrush buckeye, Aesculus parviflora, in a nursery in New Bedford, Massachusetts, even though the plant was just a small thing in a plastic pot at the time. Now it’s my biggest shrub, and also one of my favorites, for it hummocky shape, handsome leaves that turn impressively gold in fall, and easy, basically disease-free disposition. Pollinators agree it’s a winner.

I had only ever seen a bottlebrush buckeye (Zone 5-8) once before, at the public garden called Wave Hill in New York City, a giant suckering mound of a thing probably 20 feet across and more than a dozen high. It grew there in the semi-shade of tall trees, as it is does in its natural habitat of the Southeastern United States, specifically rich woodlands in Alabama, Georgia, and northern Florida. I loved its big mountain of a presence right away—and then on that shopping trip to Allen Haskell’s former nursery in New Bedford, there it was. My plant! 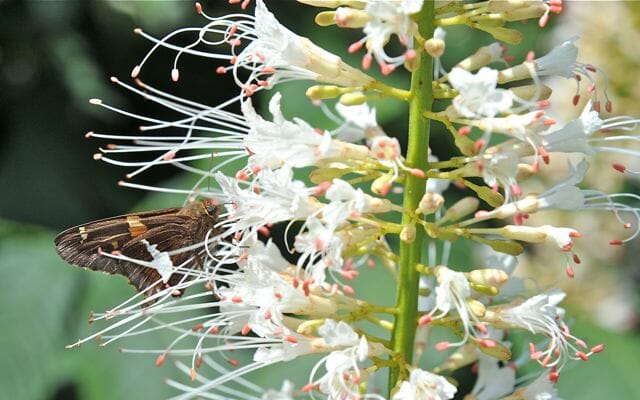 Though from a distance the flowers appear to be cream-colored, each tiny one on the long wands (technically panicles) is delicately splashed with drops of orangey-red paint–actually the red anthers and pinkish filaments inside the little trumpets. Butterflies and many insect pollinators love to visit them (that’s a silver-spotted skipper sampling the offerings, above).

One year, a group of Baltimore orioles explored them enthusiastically at bloom time in the garden, too, as they do apple and cherry blossoms here in early spring. (Among other wildlife, it is rated as not appealing to deer.) 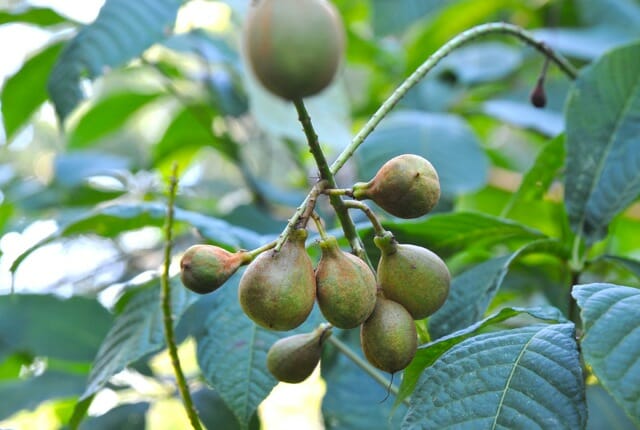 After the blooms fade, garden visitors always ask, “What’s that shrubby pear?” in late summer and early fall, when the brown (pear-shaped, of course) pods (above) form. It’s no pear at all; it’s related to horse chestnuts. 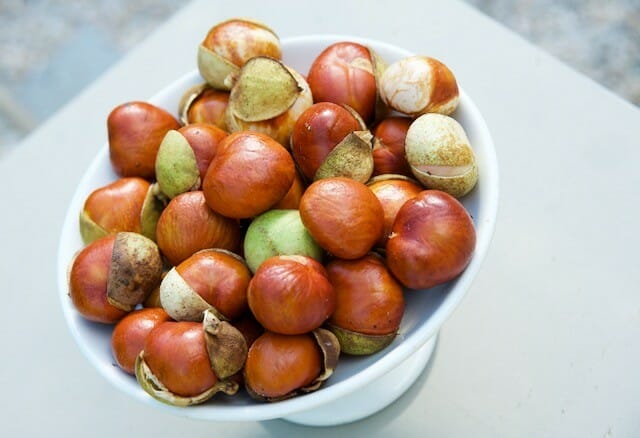 Only once in all the years I have grown it has the Aesculus produced a full crop of mature nuts (above a few of the many hundreds from the 2015 crop). Though hardy up here in Zone 5, conditions are apparently not ideal for reliable reproduction. The nuts delighted local chipmunks and squirrels, but are reported to be poisonous to humans or livestock. 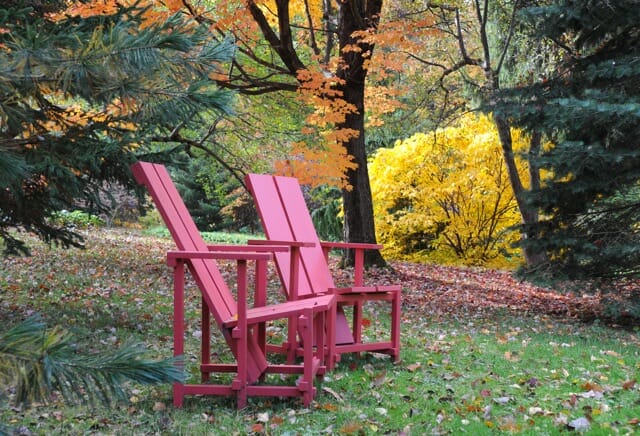 Years after I found my original plant, Chicago-area nurseryman Roy Klehm learned that I loved Aesculus and recommended the later-blooming variety called ‘Rogers’ (a selection from A. parviflora var. serotina). It’s a slightly larger shrub with very large flower stems (about 30 inches long, photo farther down the page) that blooms a couple of weeks after the straight species. Now I have a longer season of Aesculus to enjoy, not a bad thing. I also have more of those giant mounds of fall gold (above).

In warmer zones like its native range, planting bottlebrush buckeye in shade to part shade is recommended, and it does well in shady spots here, too. Bottlebrush buckeye can be planted out in the open as well up North, where the summer sun is less fierce, making a beautiful specimen. A group of them would be even more dramatic–and a faster route to a colony as well. 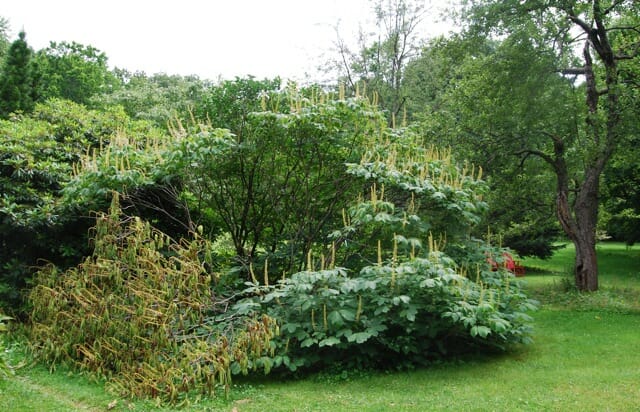 A few years ago, my original plant got caught in the swirling winds of a microburst of oddball weather here (above), and half of it was flattened, remember? Thankfully, there are always more stems suckering up from this strong colonizer. Another year or two and it was back to its old self, 20 feet across and about 14 feet tall. Give it plenty of room–and I mean plenty–and it will make a beloved companion for decades to come. 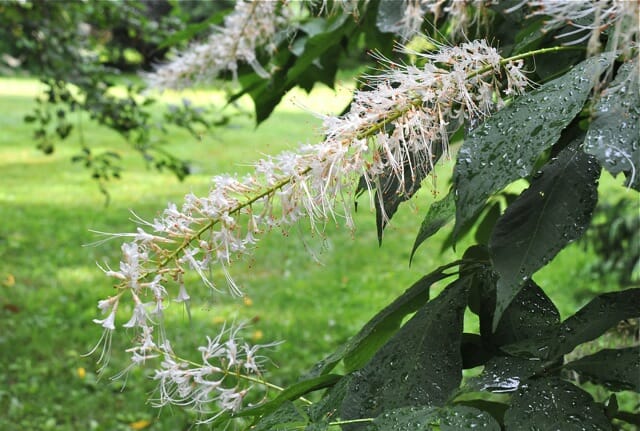 sources of bottlebrush buckeye and more:

Categoriesdeciduous Featured shade gardening trees & shrubs
Tags
great shrubnative shrubs
Radio Podcasts
a way to garden podcast
Margaret's weekly public-radio show, from Robin Hood Radio in Sharon, CT, the smallest NPR station in the nation. Listen live at 8:30 AM EDT Mondays, to the replay Saturday morning, or stream the podcast anytime. LISTEN OR SUBSCRIBE FREE: Get the iTunes version; find it on the Stitcher app; or on Spotify, or your favorite podcast app. Browse past interviews below.
Podcast Archive

WHAT’S THAT BIG SHRUBBY PEAR YOU GROW?” people ask when walking through the garden in August onward. That “big, shrubby pear” is no pear at..
Read More
g
May 11, 2009
27 Comments

T HERE IS A BIG CLOUD OF THE LOUDEST, EGG-YOLK GOLD in a shady part of my garden now, the kind of botanical scream that..
Read More
f
July 8, 2008
19 Comments

THE SAYING GOES THAT A THING OF BEAUTY is a joy forever. I guess “forever” in this case is in the mind’s eye. My darling,..
Read More