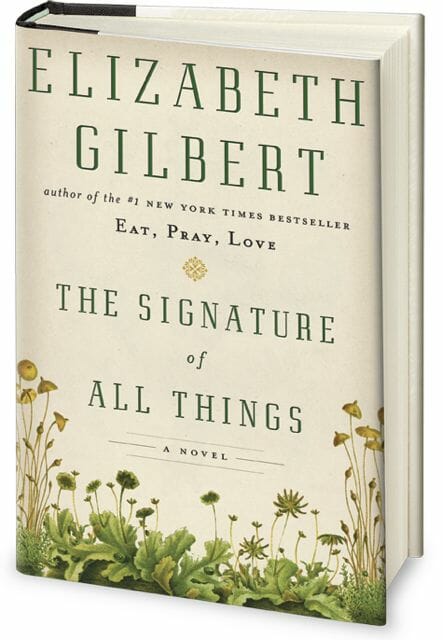 I’M BLAMING LIZ GILBERT for my sudden craving for a massive writing project to hold me prisoner for years. That’s what I imagine it took her to write such a layered and wildly original tale as “The Signature of All Things,” her new novel. It’s the story of plant-passionate Alma Whittaker, born in 1800, who, “was never scolded for returning home with muddied boots and hems, so long as she came home with good specimens for her private herbarium.” Lucky girl. I had such fun this summer reading an early copy, I bought four extras to share now that it’s out.

Being plant-mad myself, I knew right away that the title referenced the obscure Doctrine of Signatures (later called the Signature of All Things). It’s a folk-medicine-meets-theology notion put forth beginning in Medieval times that God, in an act of mercy toward humans, had imprinted in all things—and on plants particularly—a signature, or sign, that revealed their use and meaning.

From shape, color, or habitat of origin, herbalists and healers could gain a clue to a plant’s purpose—for instance, one with red sap might strengthen the blood (think bloodroot), or a kidney-shaped nut might be good for the kidneys. Some common garden-plant names today still echo the Doctrine, such as lungwort (Pulmonaria, for pulmonary ailments) or snakeroot (an antidote, it was thought, for snake venom).

NOW, GILBERT’S NOVEL is not a musty old book about the Doctrine of Signatures; I promise. Nor is it a book about the other scientific disciplines–evolution, for example–that likewise play roles in its pages. Put very simply, I suppose “The Signature of All Things” is about the notion of looking for meaning—for gleanings of truth, and also for reassurance–in the natural world.

It is through the eyes of Gilbert’s heroine–a child of the literal Age of Enlightenment–that we go on that eye-opening adventure. Alma Whittaker, born three weeks after the death of George Washington, is the brilliant offspring of a rough but cunning plant-explorer father, and truly “her father’s daughter,” we learn: stubborn, uncomplaining, and inclined to “restless inquiries.” (Some of the latter get a bit steamy, as Alma is inclined toward serious self-exploration, too. So much for repressed Victorian sexual urges!)

Alma has what is to my mind the most admirable of qualities:

“She wanted to understand the world,” Gilbert writes, “and she made a habit of chasing down information to its last hiding place, as though the fate of nations were at stake in every instance.”

Though her planstman father was of meager beginnings, he made his considerable fortune in the 19th-century botanical trade. Alma grew up in emerging Philadelphia, in “an Arcadia” called White Acre, whose greenhouses were stuffed with the plunder of plant explorers arriving back from shores of a fast-expanding world: treasure like cycads, palms, orchids, ferns, and citrus. She also lived surrounded by books. 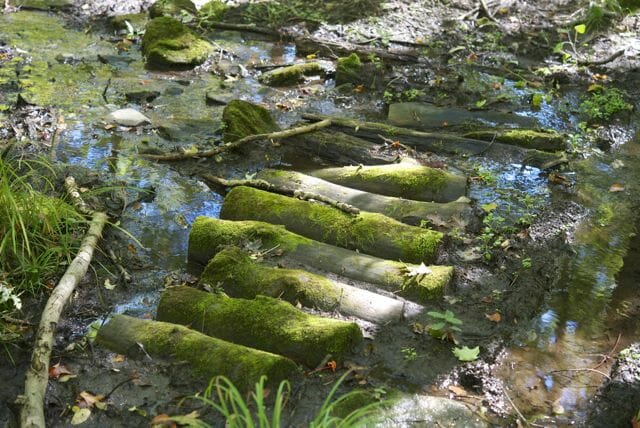 BUT IT WAS THE NATIVE WOODLAND around their home that drew Alma in most, and where she sought—by examining what are among the toughest-to-differentiate plants of all, the mosses of the Bryophtya—to make taxonomic sense of things, and in the process parse ever-bigger questions.

“What Alma wanted to know most of all was how the world was regulated,” Gilbert writes. “What was the master clockwork behind everything?”

That’s the biggest question of all, of course, and this is a big book, chronicling an ambitious life journey (both Gilbert’s in the writing of it, and her leading lady’s).

Eventually Alma–long a spinster, then briefly a bride–finds herself at age 50ish as a botaniste voyageuse on a boat to Tahiti, off to investigate another form of “why?” after a mishap befalls someone close to her. Her sea captain along the route flatters Alma, his only female passenger, as “a right little daughter of Neptune” when she stays calm in water that is anything but—though by this time we know that terra firma is the undaunted Alma’s true realm.

As a reader, I was glad for Alma’s tireless examination of every tiny bit of moss; for all the days she spent rooting around ever deeper and deeper. I was likewise glad that Gilbert, who has become a keen gardener in recent years, gave herself over to the challenge of this botanical quest.

how to win ‘the signature of all things’

I’VE PURCHASED four extra copies of Elizabeth Gilbert’s “The Signature of All Things” to share with you. All you have to do is answer the question below, with your comment in the box below:

What book or books with a natural backdrop—whether garden, wilderness, birds, the sea—are among your favorites?

Two of my many answers:

I love the little novel “Birds in Fall” by Brad Kessler, a tale of an ornithologist and others who fall from the sky in a plane crash, and the connections that form when their loved ones gather near the crash site to look for answers. In non-fiction: “The Snoring Bird,” the eminent biologist Bernd Heinrich’s homage to his father, a man of natural sciences in his own right who was driven from the family land in Poland by the Red Army, and forced to flee Europe and start again.

Nothing to suggest, or feeling shy? That’s fine; just say “count me in” or some such, and I will. But I’d love some reading suggestions from you! Winter’s just ahead, you know.

You can also order a copy of “The Signature of All Things” right now.

And guess what? I got almost all the way to the last sentence of this post without saying, “Eat, Pray, Love.” Why? Because my favorite Gilbert of all is not that breakaway hit but rather, “The Last American Man,” the true story of Eustace Conway, a modern-day mountain man. Speaking of grand tales of exploration set in nature.

(Disclosure: Amazon affiliate links yield a small commission, with which I purchase books for future giveaways.)

CategoriesNature woo woo
Radio Podcasts
a way to garden podcast
Margaret's weekly public-radio show, from Robin Hood Radio in Sharon, CT, the smallest NPR station in the nation. Listen live at 8:30 AM EDT Mondays, to the replay Saturday morning, or stream the podcast anytime. LISTEN OR SUBSCRIBE FREE: Get the iTunes version; find it on the Stitcher app; or on Spotify, or your favorite podcast app. Browse past interviews below.
Podcast Archive

links: sample a new novel, can tomatoes and more

I SPENT SOME OF A RAINY holiday weekend clicking about online, often with consecutive batches of tomato sauce bubbling on the stove. The result (besides..
Read More
b
December 22, 2018
10 Comments

THE GARDEN MIGHT be mostly sleeping where I live, but it’s not out of mind by any means. I keep going back to a couple..
Read More
a
July 2, 2016
178 Comments

a curious look at plants, and life, with ‘lab girl’ author hope jahren

WHEN THE UMPTEENTH reader or listener to A Way to Garden emailed this spring to say that I would really identify with the current bestseller..
Read More