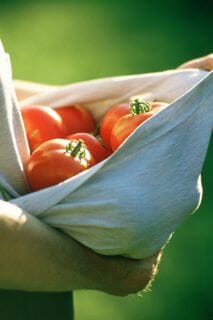 WHY DO YOU GARDEN? I keep asking myself daily as I risk sunstroke to mow and weed and drag hoses round the place. And why do you garden? Some of you have told us, I know, but yesterday when I was in for my third cold shower between rounds, I thought, “Why do I do this?” and figured maybe some of you were wondering exactly the same thing about yourselves.

I garden because I cannot help myself.

I garden because I cannot look out the window and see the shaggy bits any longer, and have to go “fix it” (as if it will ever be “fixed”).

I garden because I do not know what my life would be without plants, truth be told. They speak to me at some level I can’t explain, each one in a slightly different voice.

I garden because it’s the only place (other than on some shrink’s couch, maybe, which would probably be cheaper) that I can be myself, completely and absolutely.

I garden because it’s the only place I don’t feel I have to wear mascara.

I garden because it makes me feel connected. Today, for instance, not long after Shower #3, I finally keyed out a bird who’s been flitting from the big rhodie out back to a pear and a lilac not far apart, a blue-gray and yellow warbler I simply could not ID. Finally, an illustrated guidebook in my filthy, manicure-less hand, it struck me: She is the girlfriend of the American redstart male I saw the other day, the flashy little black, white and orange guy who was in the spruce maybe 15 feet away. They could not look more different.

Actually, as it turns out, she may be one of two girlfriends. Seems the dandy redstart is a playboy (and a land baron, too). The Cornell Lab of Ornithology says he is “occasionally is polygynous, having two mates at the same time.” As if that’s not bold enough, he keeps them in different territories, up to 500 meters apart, unlike other polygynous birds, and waits till female #1 is incubating her egg before he runs off with #2. (I will reserve comment on that behavior, or almost.)

I would never have know this (or counted birds each winter for various citizen science projects) if not for my gardening. Like I said, it makes me feel connected.

I garden because I like Italian-style green beans, the ones called ‘Romano’ or flat-podded, the ones I had for dinner last night.

I garden because when I brush up against the tomato foliage, it smells like…well, you all know that tomato-foliage smell, and the inky green juice the bruised foliage leaves on your trousers and skin.

I garden, as I say, because I cannot help myself. And so out I go again, now, but not before asking: Why do you garden?

CategoriesNature woo woo
Tags
bird watching
Radio Podcasts
a way to garden podcast
Margaret's weekly public-radio show, from Robin Hood Radio in Sharon, CT, the smallest NPR station in the nation. Listen live at 8:30 AM EDT Mondays, to the replay Saturday morning, or stream the podcast anytime. LISTEN OR SUBSCRIBE FREE: Get the iTunes version; find it on the Stitcher app; or on Spotify, or your favorite podcast app. Browse past interviews below.
Podcast Archive

THE GARDEN MIGHT be mostly sleeping where I live, but it’s not out of mind by any means. I keep going back to a couple..
Read More
d
February 10, 2018
425 Comments

developing a signature garden style, even in a small space, with designer susan morrison

I DON’T HAVE a small yard, but I nevertheless sat down with a new book called “The Less Is More Garden” by landscape designer Susan..
Read More
&
December 4, 2016
393 Comments

‘lessons from the great gardeners,’ with matthew biggs

HOWEVER THEIR DREAMS were realized, author Mathew Biggs writes about the 40 icons covered in his book “Lessons From the Great Gardeners,” their aim was..
Read More