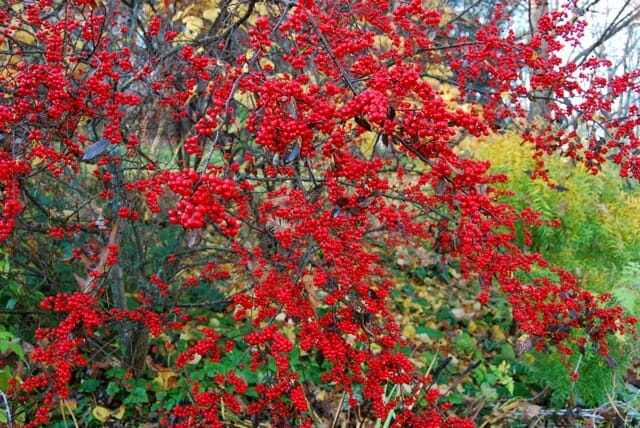 THE BIRDS AND I HAVE A LOT IN COMMON. We are both lightweight, flit nonstop from one thing to another, and can’t get enough winterberry hollies, or Ilex verticillata. Not content with my 35 or so big, old plants, I just added another 20 this fall. Good thing, too, since the birds seem to have told their friends, who told their friends….Welcome to a tale of my disappearing winterberry.

(Note on Gallery: Clicking on a thumbnail gives you a large, higher-quality image.)

Winterberry hollies are native to swampy areas from Canada south to Florida, from Wisconsin and Missouri east.  Despite their heritage in wetlands, I grow my plants in normal to dry soil, at the edges of my hilly outer fields. I just don’t have wet lowland to offer on my windy hillside.

Though they’ll fruit much better in a moist year than a dry one (as with all fruiting plants), winterberries never disappoint. These are durable shrubs best used in mass plantings and in sunny spots where their nondescript spring and summer appearance (twiggy with plain green leaves) won’t be an aggravation. You need to add a male (non-fruiting) for each group of females; certain males pollinate certain varieties, and your nursery can help with the matchmaking.

I don’t put winterberries in the beds right by the house, but use them instead as a long-view item in fall and winter, when the garden is otherwise pretty quiet. I have masses of 8-12 plants each positioned in several directions from key vantage points inside the house, and even at 60 and 100 or more feet away, the fruited groupings “read” as brilliant landscape elements when I am tucked indoors.

Or so the theory goes. Only problem: The birds got a little greedy this year. Normally they start eating in late October, when the winterberry leaves begin to drop, but stagger their feeding frenzies so they they, and I,  have something to savor until well into January. Normally they start with the red fruits, and don’t even think of moving on to the paler orange and golden ones till much later winter.

Not in 2008. In late October and the first week or so of November, I literally watched a large flock of cedar waxwings and another of American robins devour most of my oldest, largest plants’ fruit crops in a matter of days. All colors, not just red. The end.

Maybe they’ve discovered another trove of winter food nearby and staked it out for later sustenance, but I am frankly worried about both of us.  I personally have no backup plan…although some long outdoor extension cords and several dozen strings of those tiny twinkly Christmas lights in red might do the trick.

Categoriesbird sh-t deciduous slideshows trees & shrubs
Tags
bird gardening
Radio Podcasts
a way to garden podcast
Margaret's weekly public-radio show, from Robin Hood Radio in Sharon, CT, the smallest NPR station in the nation. Listen live at 8:30 AM EDT Mondays, to the replay Saturday morning, or stream the podcast anytime. LISTEN OR SUBSCRIBE FREE: Get the iTunes version; find it on the Stitcher app; or on Spotify, or your favorite podcast app. Browse past interviews below.
Podcast Archive

tough year for winterberry, but what about birds?

ONE OF THE MAIN ATTRACTIONS HERE EACH WINTER, from a bird’s-eye point of view, are the many winterberry hollies massed around the periphery of the..
Read More
a
November 14, 2012
6 Comments

I LOVE GOLD-LEAVED PLANTS, and I am at least as mad about winterberry hollies. When I learned this year that the two came in one..
Read More
f
November 5, 2009
15 Comments

AN INCOMING FLOCK OF ROBINS LAST WEEK and another of cedar waxwings just after remind me why I grow big masses of fruit-bearing plants, particularly..
Read More