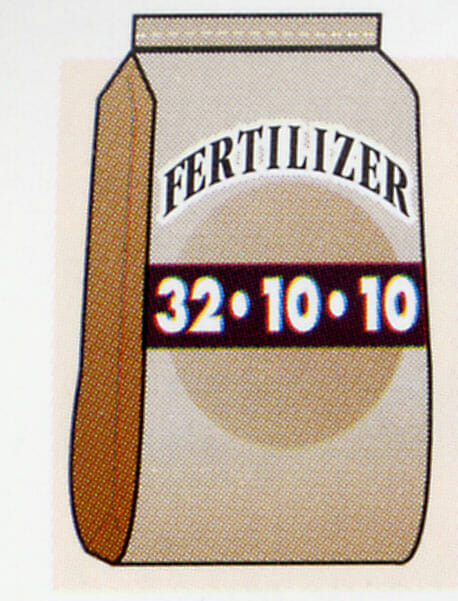 BAGGED FERTILIZERS, WHETHER CHEMICAL ONES or their all-natural, organic counterparts, are no substitute for building healthy soil. Though I firmly believe in purchasing only the latter, which are made from renewable resources such as by-products of other industries, I use them as supplements, the way I use multivitamins for myself. I still eat three squares a day, and the soil needs real food, too, not just a booster here and there.

The numbers on a fertilizer bag are the so-called N-P-K ratio, the percent of nitrogen, phosphorus, and potash (or potassium, chemical symbol K) inside the bag. Simply speaking, nitrogen is for green growth; phosphorus is for roots, flowers, and fruit; potash is for general vigor and disease resistance. A so-called balanced fertilizer, often recommended in books, is one that has equal percentages of each element.

With chemical fertilizers, the numbers are much higher than with organic formulations. A standard is 10-10-10 or 5-10-5, meaning there are those percentages of each element in the bag (the rest is filler). You won’t find those totals in any organic formulation. In fact, if the total of the three numbers on a so-called organic or natural bag adds up to more than 15, I’m suspicious. Unless blood meal—an organic material very high in nitrogen—is in the ingredient list, I suspect that the formula has a chemical booster in it.

Labels can be confusing, since many companies have put flowers and butterflies on their bags but still have chemicals inside. Learn to read what’s inside; the more plain-English words you see on the ingredient list, the better. Typical nonchemical ingredients are dried animal manures, rock dusts, bonemeal, alfalfa meal and other meals, and dried blood.

All-natural, organic fertilizers aren’t a quick solution, since most of them break down slowly (blood meal is a notable exception). Even chemical fertilizers aren’t instant remedies, except the so-called soluble ones, like all those blue powders and liquids millions of people dilute to pour on their houseplants and garden plants every day, which deliver nutrients faster than do granular formulas. For a natural liquid fertilizer, I use concentrated liquid seaweed and fish emulsion, diluted according to the label directions.

Grass clippings are an often-wasted source of nutrients for the garden, and it is hard to believe people still pick them up and toss them instead of leaving them on the lawn to feed the soil or using them to feed other areas of the garden. A great recent article in Mother Earth News advocates this (and other smart ways to fertilize with available organic materials). And then there is the essential soil-building tactic of cover-cropping, or green-manuring, growing crops to turn to improve the soil. Cover-cropping rates its own entry, and it’s on my to-do list.

Although compost is not strictly speaking a fertilizer, I recommend it highly as a soil conditioner, and soil conditioning is the point, not quick fixes. I layer on a couple of inches of it every season to my beds, then cover with a fine-textured mulch that is also itself a compost, made from aged stable bedding, which breaks down and improves the underlying soil, too, in time. Depending on the source, compost does have a degree of fertility (aged animal manures tend to have more than, say, rotted leaves), but most of all what it does is to lend the soil a capacity to handle nutrients and moisture more effectively and make them available to plants. Pile it on, as much as you can produce or acquire–or at least until your back aches too much each spring and fall to toss another shovelful around.

Categoriescomposting for beginners garden prep organics
Radio Podcasts
a way to garden podcast
Margaret's weekly public-radio show, from Robin Hood Radio in Sharon, CT, the smallest NPR station in the nation. Listen live at 8:30 AM EDT Mondays, to the replay Saturday morning, or stream the podcast anytime. LISTEN OR SUBSCRIBE FREE: Get the iTunes version; find it on the Stitcher app; or on Spotify, or your favorite podcast app. Browse past interviews below.
Podcast Archive

which fertilizer should i use? feed the soil instead, says lee reich

WHAT FERTILIZER should I feed my (fill-in-the-blank) plant? A lot of you ask that question, about things ranging from magnolias to tomatoes. Soil fertility, and..
Read More
g
November 23, 2014
16 Comments

QUICK, BEFORE THE FROST gets hold of the ground for good, do it: Take a soil test, to send off to the lab. Host Joe..
Read More