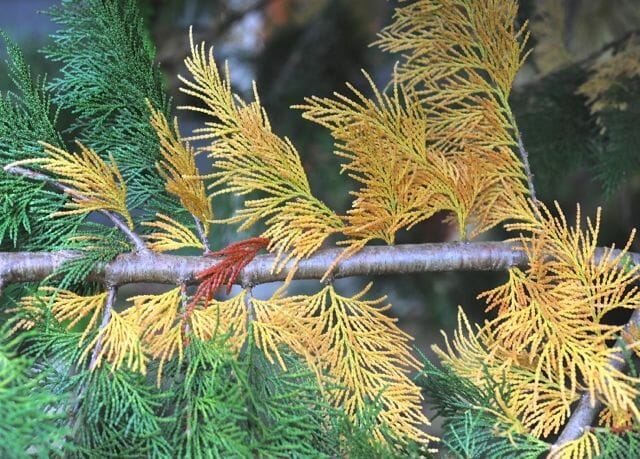 DON’T PANIC: Nothing’s wrong, and they’re not all dying in unison, I promise. Though we commonly call them “evergreens,” conifers such as pine, arborvitae, spruce and Hinoki cypress (above) lighten their load of old needles (the inner ones) in late summer and fall, with a show of yellowing or browning that can scare a gardener at first.

This phenomenon should not be confused with browning at the tips or overall yellowing or browning that can happen at other times—such as from winter desiccation; from the effects of roadside salts; from pests and diseases (including diplodia tip blight in some pines, or phomopsis tip blight in spruce and non-resistant junipers, or similar looking kabatina in junipers); or from drought. (See what road-salt damage and winterburn look like by comparison in these photos.) 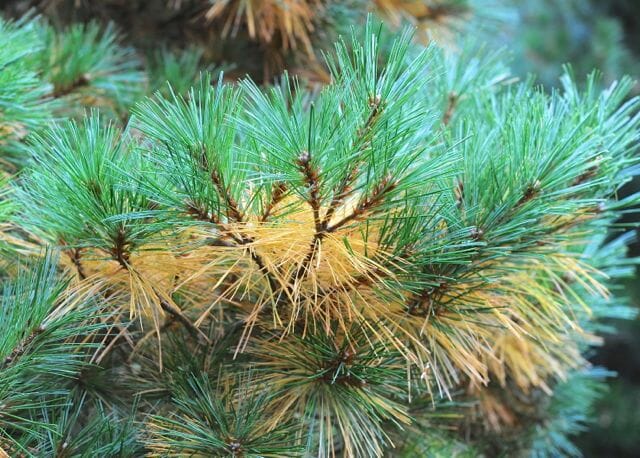 The browning I noticed in late July on my Eastern red cedar in the front yard (Juniperus virginiana) is suddenly showing up as gold or rusty-brown or a progression from one to the other on many other conifer species. The Eastern white pines (Pinus strobus), above, with their long needles, are always the most dramatic, turning what looks like mostly gold at first. Hard to believe the plant will be OK.

But in fact inner needle-drop is a normal part of the life cycle, though the rate varies by species, and can also accelerate if environmental stresses like dry conditions or pest infestation have affected the tree or shrubs in a given season. 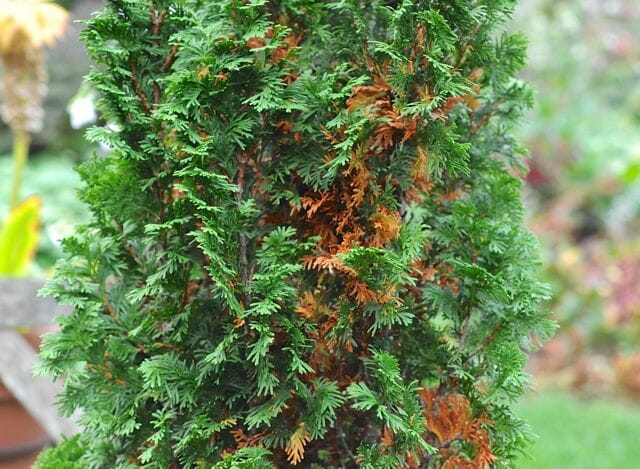 Before you call the arborist in, though, go inspect: Look at a branch closely (such as in the Thuja occidentalis, above), to identify where along it the fading foliage is. I found the illustration below on a Michigan State University Extension factsheet, showing the natural aging and shedding cycle (again, it varies by species how long till leaves are shed).

The losses should generally be from the inside out, not at the branch tips. Inner needles are the oldest, and as they age and get shaded by new growth farther out, they photosynthesize less effectively and are eventually shed. The plant lightens its load, and good thing, since snow and ice may be coming and extra needles could hold too much weight for the longer branches to bear. 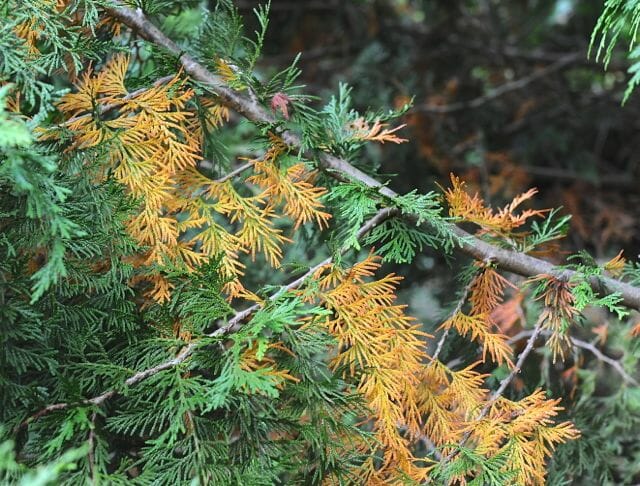 All conifers do this, just in varying degrees (that’s a Thuja plicata just above), and at various speeds from every couple of years to every five or longer. In fact some, such as metasequoia and bald cypress and larch, do it thoroughly every year–the so-called deciduous conifers. But that’s another story.

Speaking of evergreens: Some broadleaf ones such as Rhododendron will be pushing off old, useless foliage now, too. The only thing I’m worrying about there: the big old leathery foliage is falling into the frogpond and making the tenants angry. As the official janitor, my workload is temporarily increased, but if I don’t keep up I could have an amphibian riot on my hands.

Categoriesconifers Featured Nature pests & diseases trees & shrubs
Radio Podcasts
a way to garden podcast
Margaret's weekly public-radio show, from Robin Hood Radio in Sharon, CT, the smallest NPR station in the nation. Listen live at 8:30 AM EDT Mondays, to the replay Saturday morning, or stream the podcast anytime. LISTEN OR SUBSCRIBE FREE: Get the iTunes version; find it on the Stitcher app; or on Spotify, or your favorite podcast app. Browse past interviews below.
Podcast Archive

AS MANY BEGINNERS DO, I CREATED MY GARDEN BACKWARDS: planting herbaceous things first and trees and shrubs later, when their different time to maturity would..
Read More
b
October 14, 2009
15 Comments

WITH THE FIRST SNOW FORECAST, and juncos and other winter birds showing up in fast-increasing numbers, my thoughts (and theirs) these colder, windy days are..
Read More
c
December 5, 2015
7 Comments

A WHOLE LOT of needled evergreens are getting turned into holiday garland and Christmas trees about now, but those aren’t the conifers I discussed with..
Read More