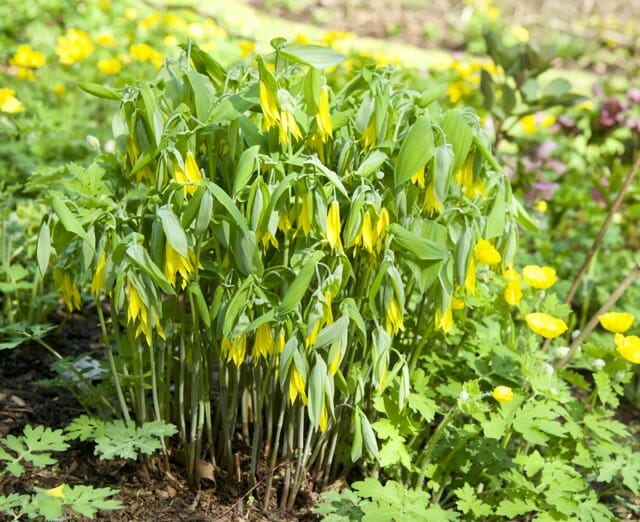 THE TREE SWALLOWS objected, but it had to be done. My hillside mini-meadow—at the edge of which their favorite nest box stands—had to be mowed and raked this week, reduced of last year’s build-up of fallen plants.

“How rude of you,” the iridescent birds chattered, swooping madly overhead, then dive-bombing. “We are trying to mate here. Give a bird a little privacy.”

“I have my mission, too,” I explained, one aimed at furthering the desired native plant species—little bluestem grass and asters and goldenrods, mostly. Around early May, I use the tractor’s mowing deck to behead the mostly non-native grasses around the bluestem. 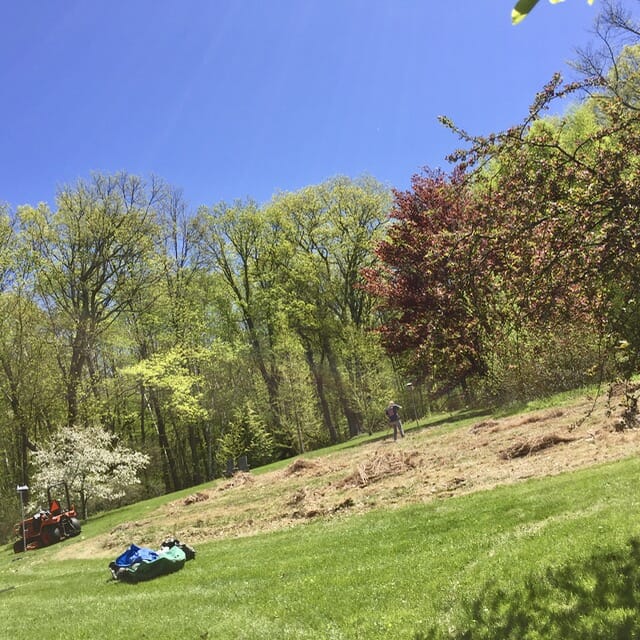 I time the haircut just as the bluestem (Schizachyrium scoparium, a warm-season grass) starts to wake up, a few weeks later than the cool-season competitors up there got started. Basically I am setting those back a bit, erasing their lead, and letting the about-to-burst bluestem get the edge instead.

That same mowing—or actually a couple of passes—also serves to chop up the residue, clearing the canvas a bit, the way a natural element such as fire or even grazing might have done once upon a time in some grassland ecosystems.

Why don’t I clean up the meadow in fall? Too much critically important wildlife—mostly beneficial insects and spiders—overwinter in such spots, and many fall and winter birds feast on its seeds, too. (More on that from The Habitat Network in our autumn interview.)

A related story: how Longwood Gardens restored its Meadow Garden. 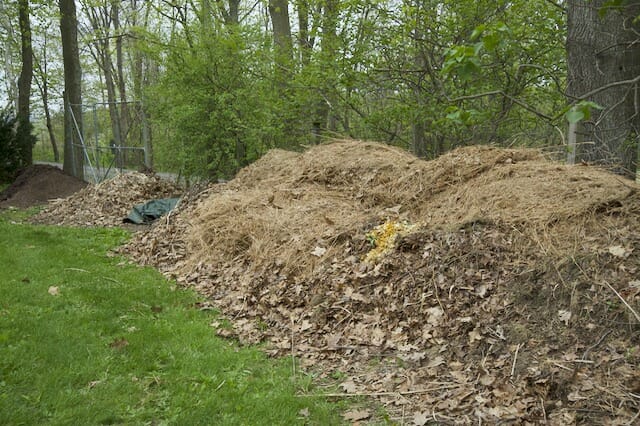 the compost heap runneth over

A side effect of that last of the major spring-cleanup projects: The compost heap, though about 40 feet long, has reached the tipping point. Uh-oh.

“We’ll need the big loader to turn that thing,” my dairy-farmer neighbor said, only half-kidding, referring to a particularly macho piece of her family’s impressive complement of macho farm equipment. I don’t think we could even get the beast through my gate, but oh, what quick work it would make of such a task, compared to a fork and shovel. 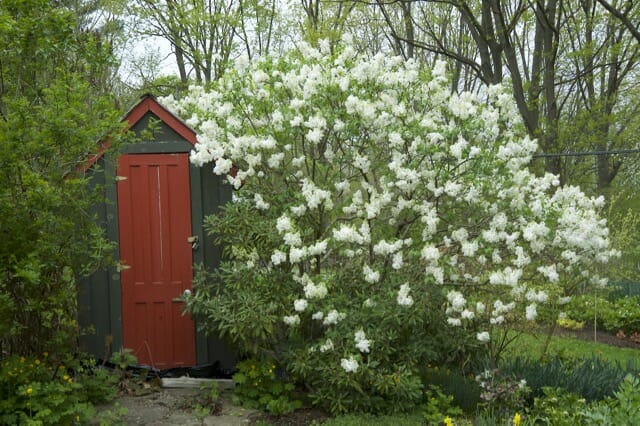 Every year at lilac time I marvel at ‘Mt. Baker,’ a white Syringa hyacinthiflora hybrid that starts a week or two ahead of the common lilacs (Syringa vulgaris). Besides its earliness, ‘Mt. Baker’ has a very distinctive form—like a big mound or low cloud maybe 10 feet high and wide. It doesn’t get gawky and leggy like many lilacs can, but keeps it shape, even after many years. Oh, and when the catalogs say it “covers itself with fragrant flowers,” they mean it. Wow. 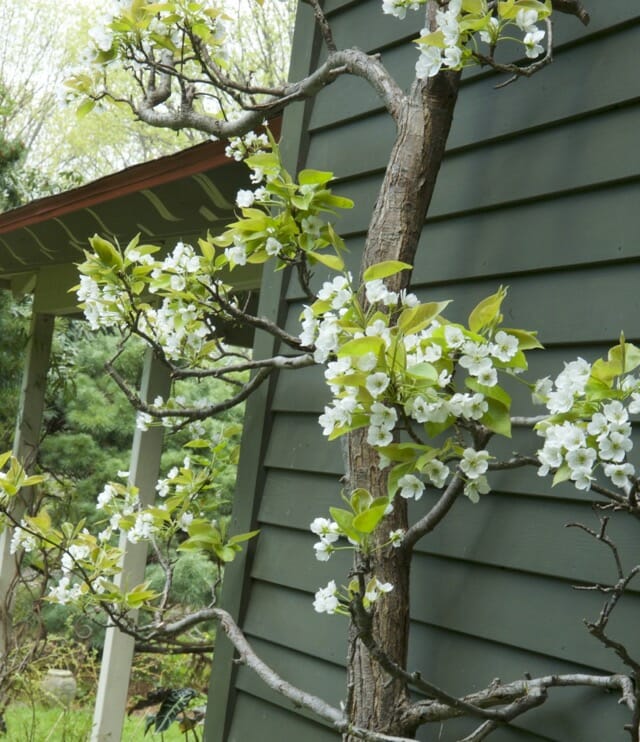 …and an exceptional espalier

In Week 1’s report I mentioned the savage haircut that the espaliered Asian pear, trained flat against the back of my house, had received at the hand of my friend Dennis Mareb of Windy Hill Nursery in Great Barrington, Massachusetts. The tree did not miss a beat, and this week flowered lavishly—proof that a firm hand, a sharp shears and a stable three-legged ladder is a winning combination.

Why an Asian pear? Besides their fast growth and good response to training like many other fruit trees, the Asian pears seem to resist leaf and fruit problems that their cousins are susceptible to here, and perform unblemished. Why have a specimen—a living sculpture—sited for viewing up-close like this and use a plant that gets leaf spots and worse? 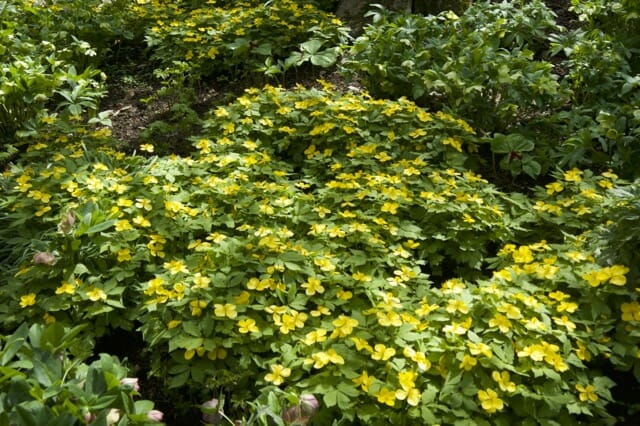 A girl cannot have enough gold, apparently. Though my obsession with gold-leaved plants has yet to show itself for 2018, since most shrubs foliage has yet to unfurl, sheets of the strange little Asian ephemeral called Hylomecon japonicum (above) joined the chorus that the Eastern wood poppy (Stylophorum diphyllum, or celandine poppy) began a week before (remember?).

I would still have just a single plant of it, had my friend Charles Price not yelled at me to divide and repeat, repeat, repeat, “making mosaics” of a few good plants in each garden bed to tie the place together. The video (below) explains. 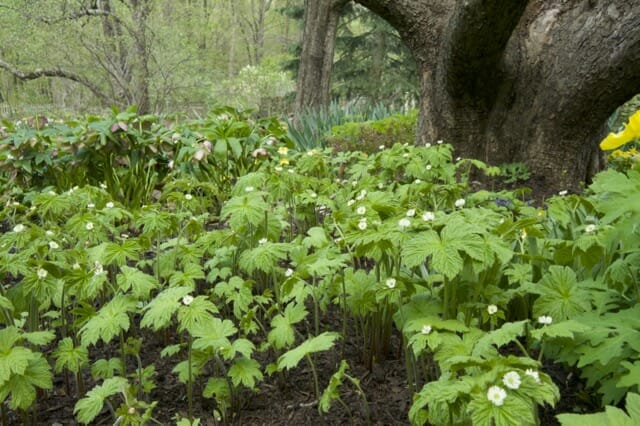 Speaking of a few good plants to repeat: Two Eastern U.S. natives I cultivate, the goldenseal (Hydrastis canadensis), above, and merrybells (Uvularia grandiflora, top of page), are likewise having their moments, too.

I would only have one plant of each of them, too, had I not screwed up my courage to divide and divide and divide, as above with that Asian Hylomecon. A palette of my favorite early native woodland perennials are profiled at this link. 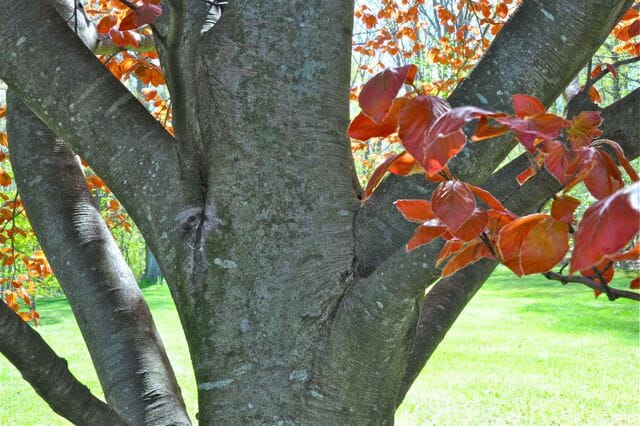 And one last thing: I could not recap the week just past without a mention of the copper European beech tree (Fagus sylvatica) that has grown for maybe 25 years just beyond the mini-meadow and those angry swallows’ house. Oh, those crazy fresh spring leaves. Oh that muscular trunk.

Categoriesornamental plants
Tags
this week in the garden
Radio Podcasts
a way to garden podcast
Margaret's weekly public-radio show, from Robin Hood Radio in Sharon, CT, the smallest NPR station in the nation. Listen live at 8:30 AM EDT Mondays, to the replay Saturday morning, or stream the podcast anytime. LISTEN OR SUBSCRIBE FREE: Get the iTunes version; find it on the Stitcher app; or on Spotify, or your favorite podcast app. Browse past interviews below.
Podcast Archive

rethinking how i mow, and late-fall lawn tips

I MENTIONED IT IN MY resolutions (the ones I made extra-early, when I started fall cleanup weeks ago): It’s time to rethink some of the..
Read More
t
August 15, 2020
488 Comments

A NEW BOOK came my way recently with a title that just said it all. “Lawns Into Meadows” is what it’s called, and its author,..
Read More
m
August 14, 2016
16 Comments

NO PLACE in the high-summer landscape is more alive than a meadow. Even in the little unmown, informal, meadow-like area I encourage uphill from my..
Read More