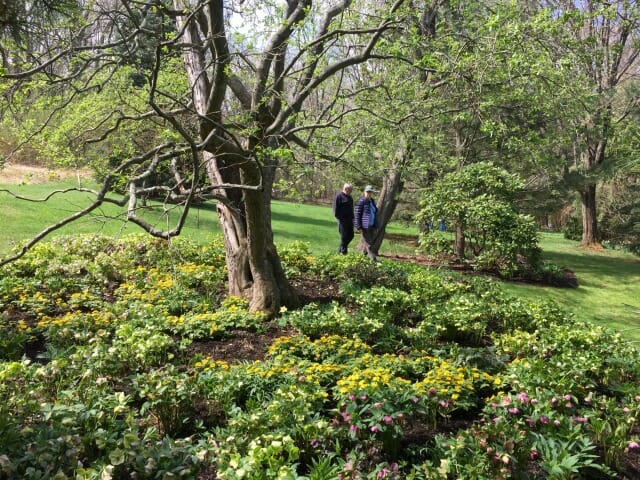 OOPS! I left the hose stretched messily across the patio, not coiled neatly by the tap. I never did patch the lawn by the vegetable garden, squiggly mazes of missing turf where moles and voles had at it beneath the snow. Clean-cut edges on all the beds? Not yet—and oh, I never did get to trimming all the bits of brown out of one of the big old dwarf white pines or … the list of undone to-do’s goes on.

But nobody among the 250ish visitors asked about those “oops” moments—such a polite crowd, blessedly—and instead just saw the half-full glass, er, garden. What they did notice and wonder aloud about: 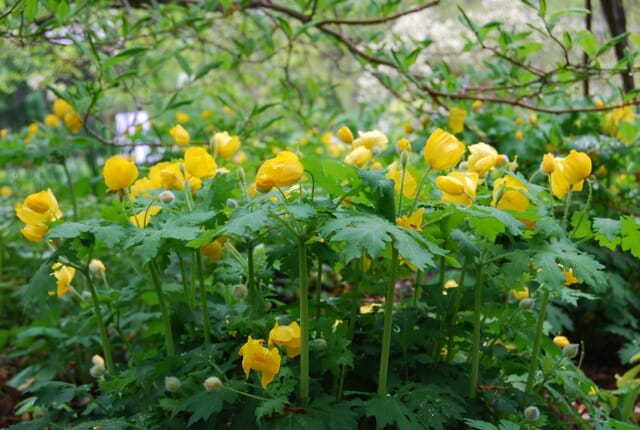 What is that yellow flower everywhere that looks like a poppy?

Good guess. Stylophorum diphyllum, the celandine poppy (above), is a poppy relative that is an Eastern North American native—but not so far east as here; maybe to Pennsylvania. I grow it as a garden plant outside its range, as I have for 20ish years.  More on it. 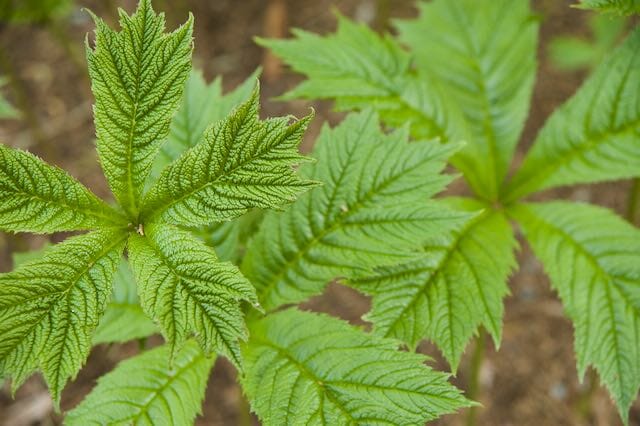 What are those big leaves under that big tree?

In my garden, that question could be asked in many spots, since I am someone who loves outsized foliage. But these questioners (one after another after another) were pointing at the foliage of Rodgersia podophylla, each stem of which will expand quickly now to maybe 3-4 feet tall and a foot and a half across. It’s a first cousin to my favorite large-leaved shade groundcover of all, Astilboides tabularis, which though growing only a few feet away was barely 6 inches high yet on Open Day. 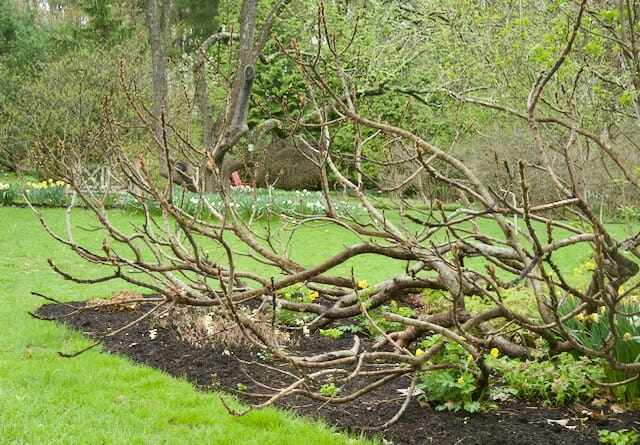 What’s that big, twisted shrub with the furry-tipped branches?

Whatever the season, cutleaf staghorn sumac (Rhus typhina) always draws attention for its twisted character and velvety stems (like a stag’s antlers) and later for its dissected foliage. Most of mine are the gold-leaf cultivar called ‘Bailtiger’ (usually referred to as Tiger Eyes). It even looks good in fall. Rhus typhina is the largest sumac on North America, so it’s another American native–though not native precisely here. 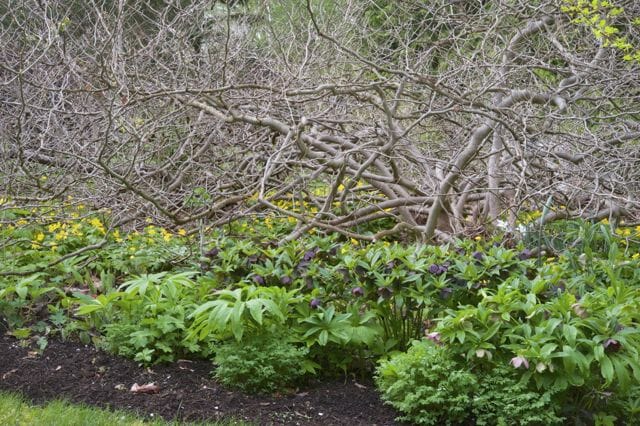 What’s that other twisted, sideways shrub by the driveway?

Likewise not in leaf yet, my 25-foot-wide, 30-year-old spike winterhazel (Corylopsis spicata), above, has character in every season, too. It’s a relative of witch hazel and Fothergilla, and when it’s in leaf you’d kind of sense that (though leaves are not a reliable way to tell who’s who among plants, I suppose).

And most of all: Where did you get all those hellebores?

My friend Charles Price was tinkering with hellebore breeding, and years ago shipped me a gift flat of some of his yellow-flowered and his “black”-flowered (very dark purple) seedlings in a plug tray, with a few stray colors thrown in for good measure. Hellebore are sexy things, and now I have every imaginable color. The oldest plants each bear 50-plus blooms. A mature hellebore—maybe 25 years old—can reach bushel-basket size I am told. Getting there! 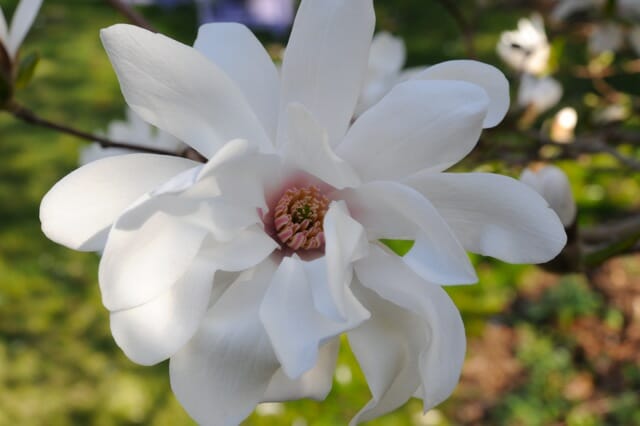 A SIDE EFFECT of the strangely delayed bloom sequence this spring is that for the first time my annual early May Open Day didn’t feature the white clouds of five century-plus-old apples, 10 crabapples and other flowering trees and shrubs. It featured Narcissus (usually more than half-gone by now) and those Oriental hybrid hellebores Charles sent, which are usually faded and colorless by this time (that’s a slate-colored one, below). The shadbush or Amelanchier was just coming into bloom; Magnolia ‘Ballerina’ (above) was showing off, too, and the espaliered Asian pear out back, against the house–which come to think of it got as many questions as all of the above. 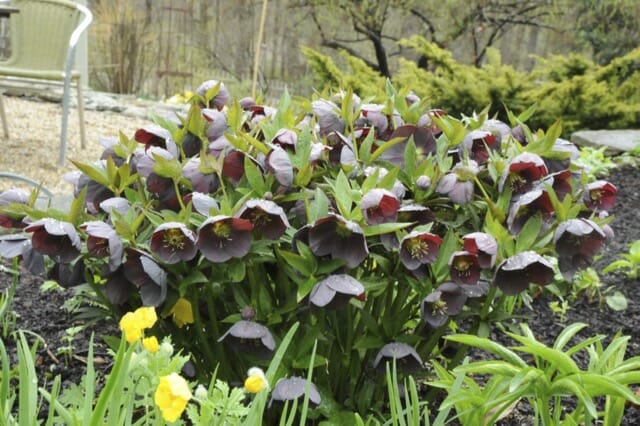 Bird-wise, things progressed faster than my to-do list this last week: The wood thrush is singing, mostly late day right now; the house wren is chattering on the early shift, a new arrival. The ruby-throated hummingbirds returned this week, too.

So that was my Week 6 in the garden, which was all about trying to check as many things off the list as possible, knowing some (many) would not get done. Progress, not perfection, as they say in the 12-Step world.

Tags
this week in the garden
Radio Podcasts
a way to garden podcast
Margaret's weekly public-radio show, from Robin Hood Radio in Sharon, CT, the smallest NPR station in the nation. Listen live at 8:30 AM EDT Mondays, to the replay Saturday morning, or stream the podcast anytime. LISTEN OR SUBSCRIBE FREE: Get the iTunes version; find it on the Stitcher app; or on Spotify, or your favorite podcast app. Browse past interviews below.
Podcast Archive

I DON’T RECALL where the annual poppies that have been replanting themselves here and there around my garden for decades came from in the first..
Read More
a
May 5, 2012
34 Comments

I BROUGHT THEM HOME (WITH PERMISSION!) from Wave Hill, the public garden in the Bronx, a couple of decades ago: a few delightfully fuzzy, fat..
Read More
e
May 18, 2014
45 Comments

WHAT SPRING WILDFLOWERS can you multiply easily yourself (like now!)? How long will a young trillium take to flower–and can you really count the little..
Read More