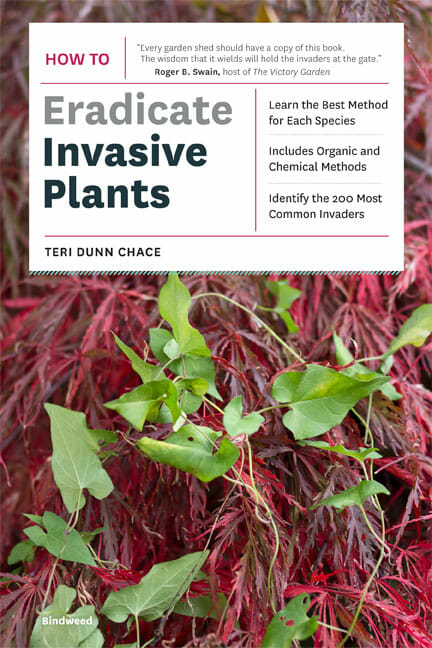 AN ENCORE VISIT to my public-radio show and podcast one recent August by Teri Dunn Chace, author of “How to Eradicate Invasive Plants,” happened just in the nick, I do believe. Late summer and fall turn out to be the best time for getting the upper hand over a wide range of common weeds, including Japanese knotweed, ragweed, Ailanthus, bindweed, curly dock and more, so I was relieved to have Teri help me chart a focused course of action. We griped about weeds, and grappled with them together.

No matter what weed you are facing, if it’s flowering or setting seed now, be sure to behead it: mow it down, harvest the blooms for bouquets, or otherwise prevent a successful sexual reproduction cycle.

“Although it’s common sense, it’s things we sometimes don’t do,” says Teri, “but if we did it would make a big difference.” Don’t let things get to where you want to turn to the store to buy some chemical to erase your weed woes. Follow her strategic plan instead:

Ragweed: Ragweed, or Ambrosia artemisiifolia (not goldenrod, or Solidago, whose pollen is too heavy to blow around and into your nostrils) is the major culprit in fall allergy season. “You really want to catch ragweed right now,” Teri says of the plant, whose copious seeds live decades in the soil. Ragweed is wind pollinated, producing inconspicuous seed after wands of greenish small flowers ripen. The seeds can last for years in the soil, and beyond that: the plant’s allelopathic, creating inhospitable conditions for neighboring plants by exuding chemicals. Mow down or behead ragweed before seed is set. (Images to ID it from seedling through maturity are here.)

Purple loosestrife: A damaging weed, especially in moist areas, that uses more than one method to reproduce, including sowing itself around after flowering. At least cut off the flowers of this one (Teri likes them in bouquets). Mowing and burning are other tactics for limiting its growth, but digging out other than small infestations is impractical because of the dense stands that Lythrum salicaria forms. 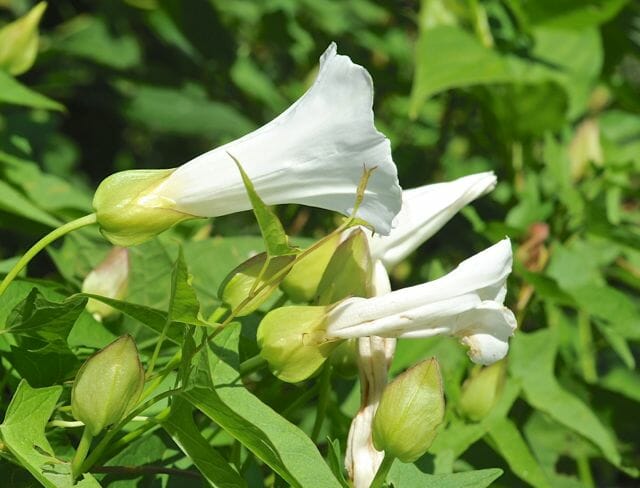 Bindweeds are setting seeds around now from their morning glory-like flowers. I have the larger hedge bindweed (Calystegia sepium), above; the smaller-flowered and -leaved wild morning glory (Convolvulus arvensis) is even more common in many gardens. The latter may also be allelopathic, releasing chemicals that deter other plants from thriving nearby.  Both reproduce from seed and from roots and root fragments (meaning if you dig unsuccessfully and leave bits, oops!).

If the vines are currently engulfing desired plants and you can’t pull them off without doing damage,  Teri says, “trace the plants back to its roots, if you can, and dislodge the roots and just leave the rest all there. After a week or two, the rest should brown off.”

Can’t get to the roots right now to complete the eradication? At least pinch or pull off the flowers of either species (to prevent self-sowing) and/or as many of its leaves if you can (to further weaken the invader). When you can get into the area, work to dig out the strong roots or rhizomes. 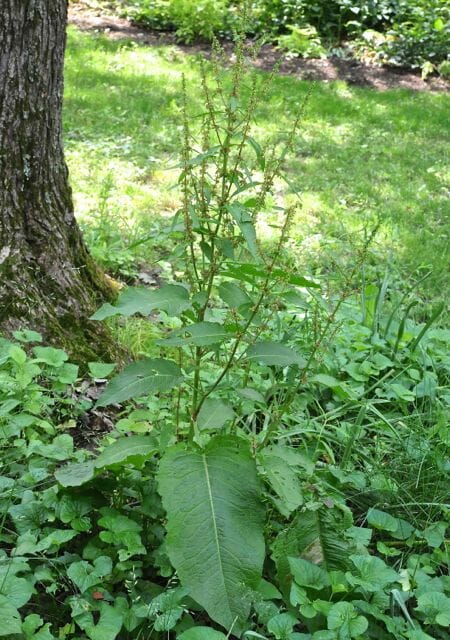 Curly dock: Rumex crispus or curly dock (above) is another wind-pollinated weed, meaning it’s tossed about your garden by the breeze.  Besides its prodigious seed production, curly dock has an impressive taproot, making it very hard to get up and out completely, but use a garden fork (easier after a rainstorm or a soaking with the hose) to try. “The minute you see dock bloom, chop off the flowers,” says Teri about the tiny reddish-green blooms. Are you surprised to hear that this one’s in the same family as Japanese knotweed, the Polygonaceae?

Japanese knotweed: This widespread invasive spreads by seed (dispersed by wind, animals, or brought in on contaminated fill) as well as by rhizomes that resemble bamboo’s, and though its common name is Japanese bamboo it is not a bamboo relative.

Dig up rhizomes when practical (not always practical, as they can reach massive proportion), or at least cut back topgrowth repeatedly, especially in late summer and fall, to weaken the root system.

“Then smother the area with thick mulch and/or a tarp and leave it in place for at least a year, perhaps longer.”

Important: If herbicide is used, late summer or fall’s the time, not spring, for it to be effective. Apply it on chopped-back plants, not giant stands. The only good part of this story: An extract of the roots is used in a treatment for Lyme disease. (More on knotweed control from Penn State and Wisconsin Department of Natural Resources, both pdf’s)

Ailanthus altissima: The so-called tree-of-heaven is no heavenly creature, and with ongoing invasions in mind it’s going to seed about now.  Also in its territory-grabbing arsenal: it’s allelopathic, emitting chemicals that keep away other plants. Chopping it back doesn’t work; the roots resprout. Either get them all, or if the tree is already of decent size, some gardeners cut it down and paint glyphosate on the cut stump in summer or early fall. This is one where Teri’s advice “start early” (as in pulling or hoeing right when the many seedlings emerge) is the best path of all.

MAKE A PASS through each garden bed each week, since weeds are not just unsightly but steal moisture, nutrients and light. Top up mulch where needed (or maybe you need a layer or cardboard or newsprint first?). First: Learn to identify your opponents, and the tactics and timing for best control.

Some of my hit parade to help in that effort:

how to win the weed book

I’VE BOUGHT TWO MORE COPIES of “How to Eradicate Invasive Plants” by Teri Dunn Chace to share with you. All you have to do to enter to win is let us know the answer to the question (share yours in comment box below). [UPDATE: giveaway is over]

What weeds are you going to tackle this late summer-into-fall?

Besides my hedge bindweed, I’m maniacal at the moment about Asian bittersweet; ground ivy (Glechoma hederacea) and the young plants of garlic mustard (Alliaria petiolata), all of which I want to dig so they don’t mature next season. Wish me luck (and same to you!).

Have no answer, or feeling shy? Just say, “Count me in,” and I will.

(Disclosure: Purchases from Amazon affiliate links yield a small commission that I use to purchase more giveaway books.)

Two winners were chosen at random after entries closed at midnight on Monday, August 26, 2013.

CategoriesFeatured for beginners how-to radio podcasts weeds
Radio Podcasts
a way to garden podcast
Margaret's weekly public-radio show, from Robin Hood Radio in Sharon, CT, the smallest NPR station in the nation. Listen live at 8:30 AM EDT Mondays, to the replay Saturday morning, or stream the podcast anytime. LISTEN OR SUBSCRIBE FREE: Get the iTunes version; find it on the Stitcher app; or on Spotify, or your favorite podcast app. Browse past interviews below.
Podcast Archive

Y ES, THEY CAN MAKE YOU FEEL VIOLENT, author Teri Dunn Chace admits about weeds in “How to Eradicate Invasive Plants.” In fact, if authors..
Read More
f
October 31, 2020
213 Comments

NOT ALL WEEDS ARE ALIENS, and at the moment I’m actually doing battle with two that are technically native American plants, but very unwelcome nonetheless...
Read More