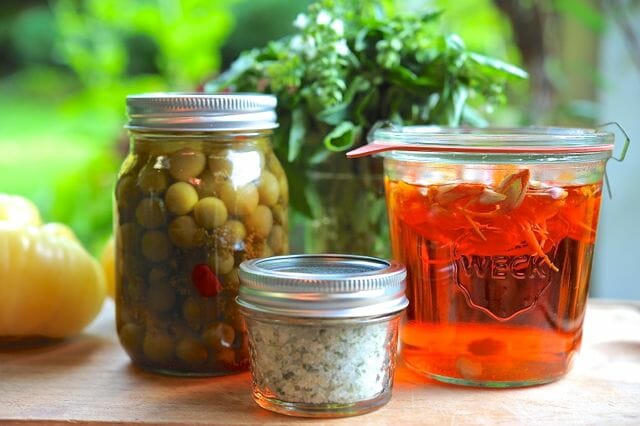 THE HARVEST IS FINALLY ACCELERATING, which got me thinking about a tool that’s as critical to success right about now as my mower and spade: the perfect canning jar. One morning this week, over a cup of tea on Skype with my friend Gayla Trail a.k.a. You Grow Girl, we ended up having an entire conversation about them, in fact. Bottom line: neither of us knows how we could live without them! The conversation a radio podcast full of her preserving tips.

From her Toronto garden and local farm markets, Gayla Trail has long captured bits of the harvest in glass–dried, frozen, fermented, hot-packed, you name it. Both of us have a bit of a canning-jar fetish, and collect old ones and new ones alike. Irresistible!

GAYLA TRAIL was the guest on the latest edition of my weekly public-radio show and podcast. Listen anywhere, anytime: Locally, in my Hudson Valley (NY)-Berkshires (MA)-Litchfield Hills (CT) region, “A Way to Garden” airs on Robin Hood Radio’s three stations on Monday at 8:30 AM Eastern, with a rerun at 8:30 Saturdays. It is available free on iTunes, the Stitcher app, or streaming from RobinHoodRadio.com or via its RSS feed. The August 12, 2013 show can be streamed here now. Robin Hood is the smallest NPR station in the nation; our garden show marked the start of its fourth year in March, and is syndicated via PRX. 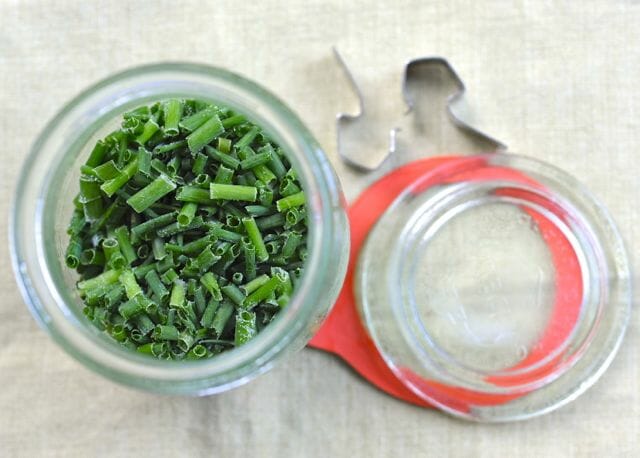 WE MADE A LIST together of some uses (the links will tell you more about each possibility).

drying herbs before storing in jars

‘MOST HERBS are fine being hung to dry, in bunches,” says Gayla, who only uses a dehydrator instead when she’s in a hurry, or with certain thicker produce. For instance, she recently dried her too-much-to-use fresh harvest of Egyptian onions—which by the way, will make your house quite pungent-smelling, she reports.

Rose petals in the dehydrator, on the other hand, are quite lovely to live with.  Here’s how she does them (and then packs them into glass canning jars). This is where those hinged-top old-style jars that are no longer safe for actual canning are just fine—and add a certain charm to the pantry shelf, too.

With herbs, keep the leaves (or petals or flowers) as intact and whole as possible, not crumbled, when putting them in the jars after drying so they retain as much flavor as possible. Gayla dries lots of mint and lemon balm—two herbs she uses often all year—this way, along with other leafy things.

What about all those leftover stems? Gayla sets them aside and adds them to scraps of onion and other vegetable peelings and bits when she makes stock.  Waste nothing!

Another way she dries herbs: laying them in large, low open tray-like baskets. This is great for things that aren’t easy to bundle up and hang, such as linden flowers (one of her favorites).

how to win the weck jars

THERE ARE TWO WAYS TO WIN one of two $25 gift certificate from Kaufmann Mercantile to put toward the Weck canning jars of your choice–one on my website, and one on You Grow Girl’s. [UPDATE: THE GIVEAWAY HAS ENDED.] (You can see the jars here on the Kaufmann site.) Be sure to comment in both places to double your chances.

All you have to do to enter is answer this question in the comments box below:

What do you use canning jars for, and are you preserving anything in them — frozen, dried, or “canned” — this harvest season?

No answer, or feeling shy? That’s fine; just say “Count me in” or something similar, and we will. Two winners–one on each of our websites–werechosen at random after entries closed at midnight on Tuesday, August 20, 2013.

Categoriesedible plants freezing & canning guest chefs herbs how-to radio podcasts recipes & cooking
Radio Podcasts
a way to garden podcast
Margaret's weekly public-radio show, from Robin Hood Radio in Sharon, CT, the smallest NPR station in the nation. Listen live at 8:30 AM EDT Mondays, to the replay Saturday morning, or stream the podcast anytime. LISTEN OR SUBSCRIBE FREE: Get the iTunes version; find it on the Stitcher app; or on Spotify, or your favorite podcast app. Browse past interviews below.
Podcast Archive

DEAR GAYLA: Well, this is just perfect. You are publicly blaming me for the fact that you are about to be overrun by giant Nicotiana..
Read More
o
February 18, 2013
321 Comments

ADD THEM TO THE LIST of plants I suddenly noticed are MIA—things I “always” grew but haven’t lately. The latest “where did they go?” crop:..
Read More
g
July 22, 2012
177 Comments

giveaway, plus a seed-saving, harvest-stashing workshop with you grow girl’s gayla trail

EVERY TIME I LOOK AT GAYLA TRAIL’s (a.k.a. You Grow Girl’s) latest book, “Easy Growing,” I want to infuse vinegars and oils and liqueurs with..
Read More