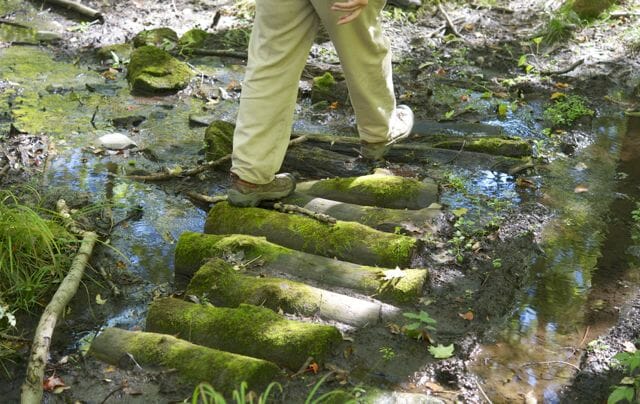 I READ ABOUT a smartphone app the other day in the newspaper, one that’s meant to help ID things you happen upon while on a hike. Naturalist and author Charley Eiseman is far better company, and I suspect he’d also put apps to shame on other fronts. Charley doesn’t just ID a plant, but also the tiny insect that’s mined a microscopic home between the layers of its leaves, or the fungus making a telltale pattern of brilliant purple stains on their surface—or where it looks like somebody shot a hole clean through another. Amazing. Charley and I went walking together the other day in my garden and the surrounding woods (those are his “tracks” in the photo above), and look at what all we found by slowing down and looking closely:

Quick backstory: You may remember Charley, co-author of my most-used field guide “Tracks and Sign of Insects and Other Invertebrates,” from our recent interview about galls and leaf mines, two of his specialties. 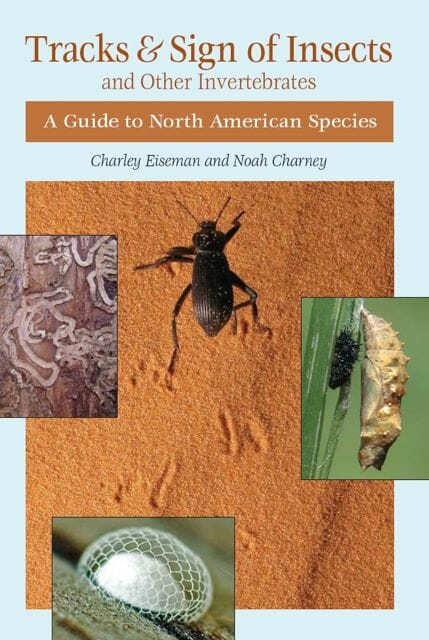 (I’m giving away two more copies; enter by commenting in the form way down at the bottom of this page, after reading the entry details in the tinted box just before that. The book can help you to know what you are seeing when you look closer, too—kind of like always having Charley by your side.)

When that story ran, Charley had noticed a photo I used to accompany it–of a squiggly “leaf mine” I’d observed in my Asian-native big-leaved perennial called Petasites. He’d wondered if it was caused by the insect that feeds in a few different genera in the tribe Senecioneae (including some native American botanical cousins of Petasites).  Why don’t you come try to find out, I’d suggested—and while you’re here, why don’t we have a wider look around? Hint, hint.

And so a couple of weeks hence, the walk began. 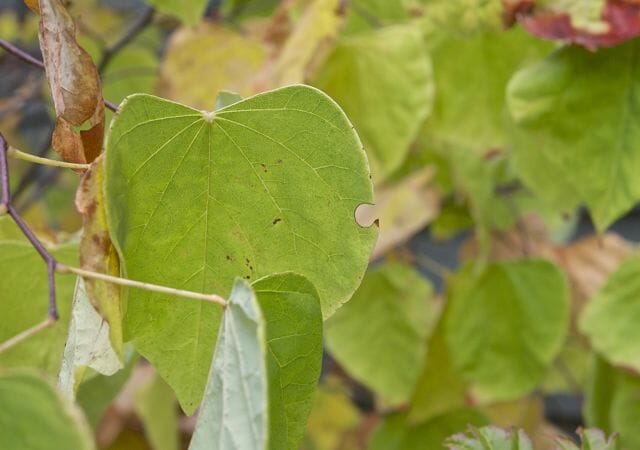 We didn’t even get out of the driveway before we’d seen not just the Petasites miners (Charley collected some leaves that look as if something might hatch from them), but also a redbud with leafcutter bee holes cut precisely into its foliage (above).  “I always get a kick out of seeing those,” said Charley—still in awe of nature’s little miracles despite so many hours of study and observation.

Not far up the front path, two more scores:

My Fothergilla apparently is providing a home to the so-called witch hazel leaf mine, Cameraria hamameliella.  “In the literature, that species is only recorded from the native witch hazel, Hamamelis virginiana,” said Charley, happy to have scored an exception to that historical record. “But I have found the mines on Parrotia at the Coastal Maine Botanical gardens as well as on your Fothergilla.” (Both plants are in the witch hazel family. The Parrotia is native to Iran; Fothergilla to the Southeastern United States.)

Charley has tried to rear this species, in order to confirm its identity and photograph the insect that emerged—the way he hoped to do when he cut the mined leaves from my Petasites to take home–but so far has only had this parasitoid emerge. (Wonder about what parasitoids are, and how they are different from parasites? I did, so I read this.) 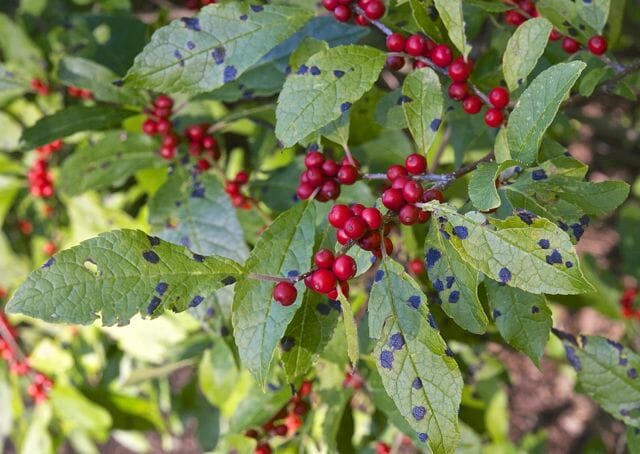 A little farther up into the garden, I asked about the black spots on some of my winterberry holly leaves, or Ilex verticillata (above). That’s winterberry tar spot, or Rhytisma ilicicola, my sidekick Mr. Know-It-All revealed. 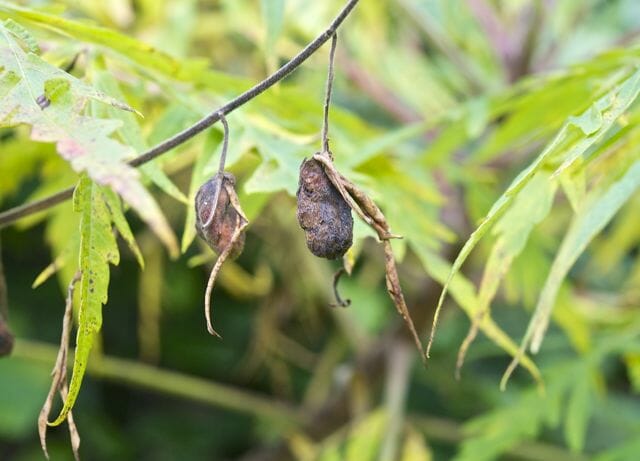 Oh, and those balloon- or pod-like structures (above) dangling from the cutleaf staghorn sumac (Rhus typhina ‘Laciniata’? It’s the gall Melaphis rhois, caused by an aphid, he reported. Cool. 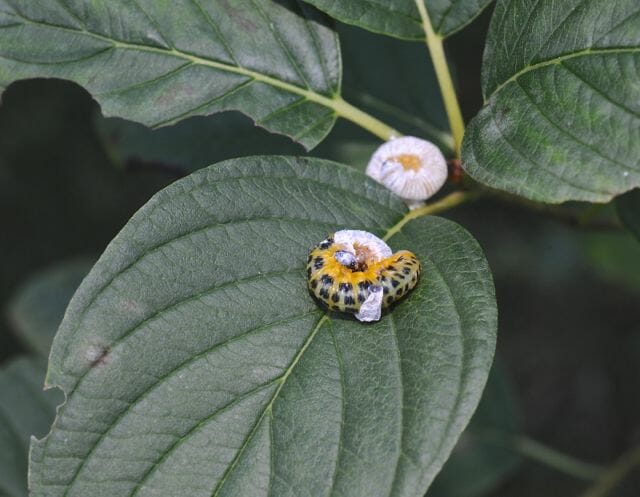 In the upper part of my backyard, a big score: Dogwood sawfly larvae (on a stand of twig dogwood shrubs). (I know, can you believe I find this exciting—but I do! And yes, this native species will chew up some leaves, but who cares? It’s late in the season, and all part of the bigger picture of my little ecosystem. And I’m sure somebody else probably eats them, too.)

The dogwood sawflies (Macremphytus testaceus) are wasplike as adults, apparently, but these caterpillar-like youngsters were coated in a waxy white substance—or at least they were when we first saw them in the morning. By the time we circled back a few hours later, they’d shed that white coating and were the most extravagant pattern of yellow and black. I felt privileged, as if I’d witnessed an important unveiling.

IN BETWEEN, we took a short drive up the hill and a long walk in the woods.  As we crossed a field at the woodland edge, the “aha’s” began again: 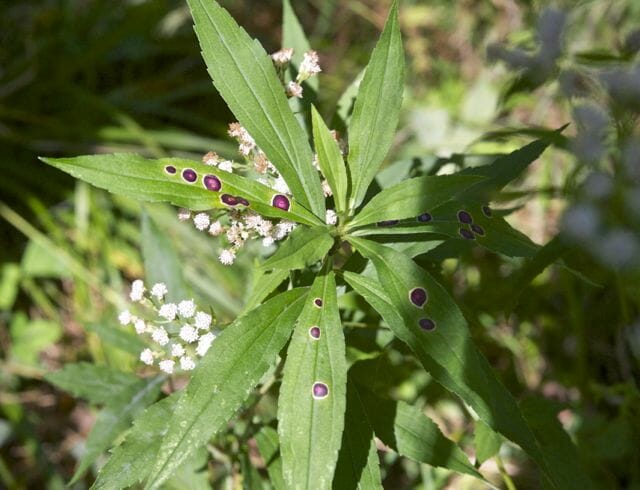 Purple spots on goldenrod leaves (above)! (They’re caused by Asteromyia carbonifera and have a symbiotic fungus inside, said Charley.  This post on his website shows the identical adult of A. modesta, and its gal–caused by a midge–which is inconspicuous because it lacks the fungus.) 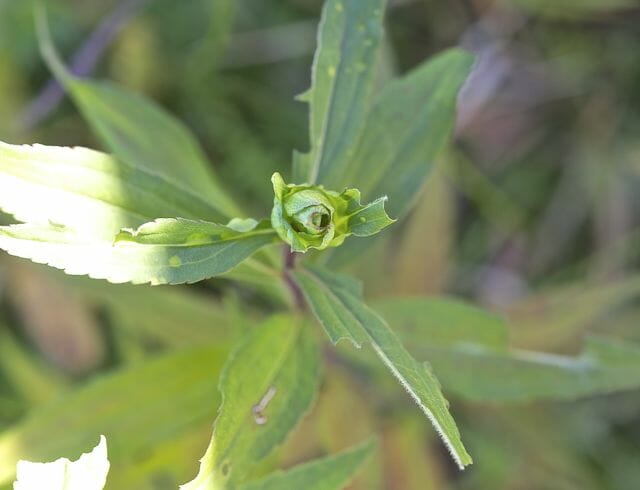 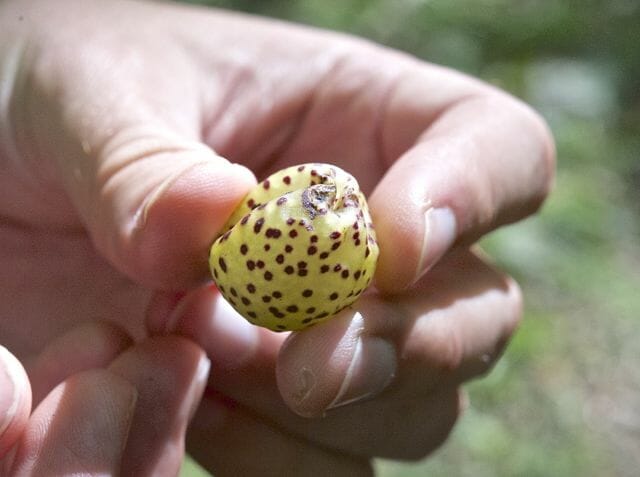 On the forest floor, I picked up a little spotted green balloon: the spotty “oak apple,” or Amphibolips cookii, caused by a wasp. Learn more about oak apples on Charley’s website (that’s the gall, above, in his hand). 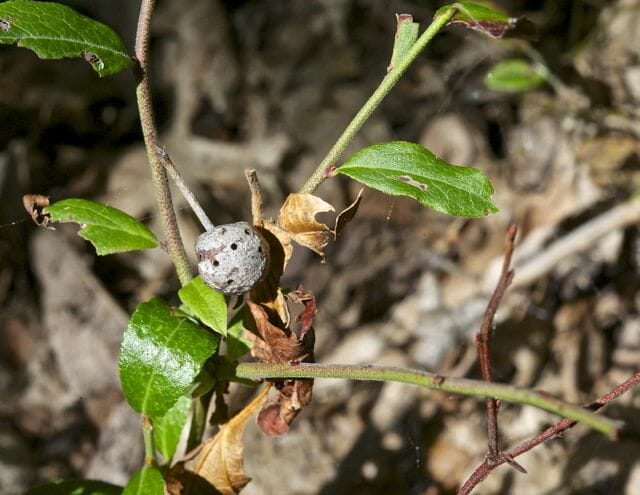 What’s that formation on the lowbush blueberry shrub, I asked (above)? A blueberry gall, Hemadas nubilipennis—which rated three installments on Charley’s blog: part 1, and part 2, and part 3. It is also caused by a wasp. 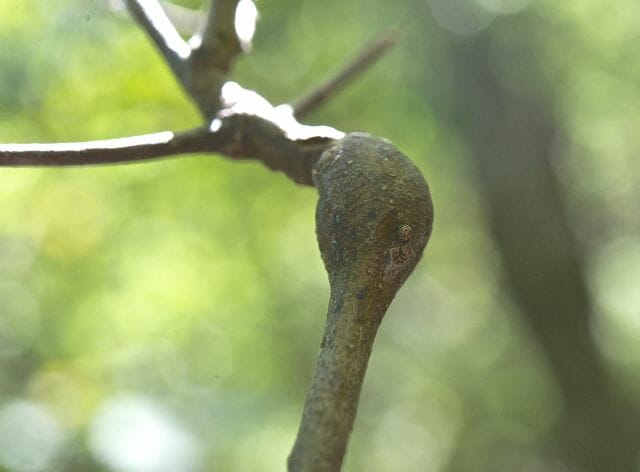 And what’s this swollen business on this oak twig (above)? The scrub oak swelling is Callirhytis quercussimilis, I learned–the work of a wasp. Like this. 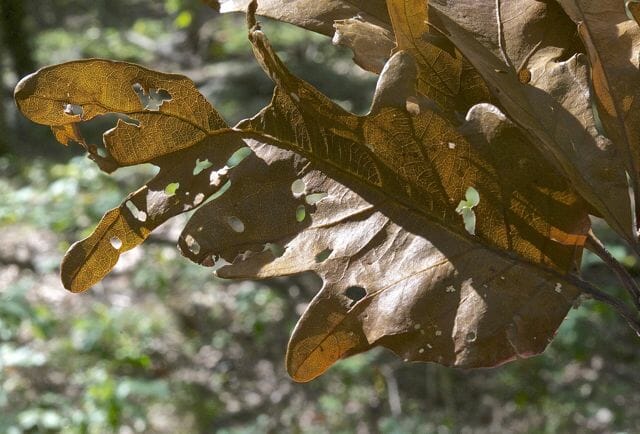 Why does this oak foliage looks like it’s full of buckshot? The oviposition holes in oak (above–with oviposition meaning holes created by a female trying to place her eggs) are caused by the “oak shothole leafminer,” Japanagromyza viridula. 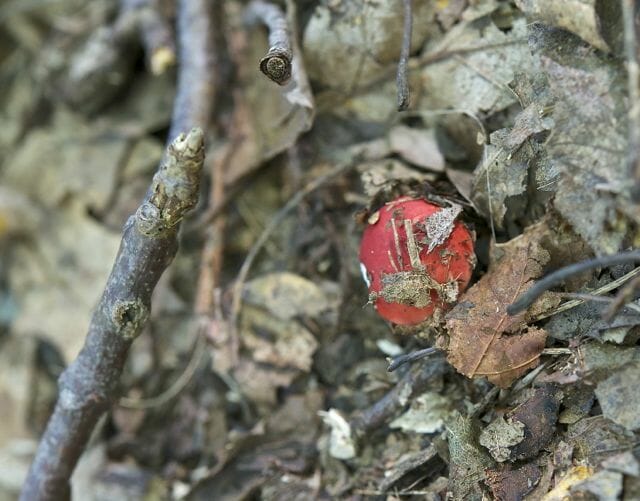 There were fungi everywhere: The little red mushrooms are commonly called Russula emetica in field guides, I learned (with the species name emetica hinting that these are not to be eaten!). 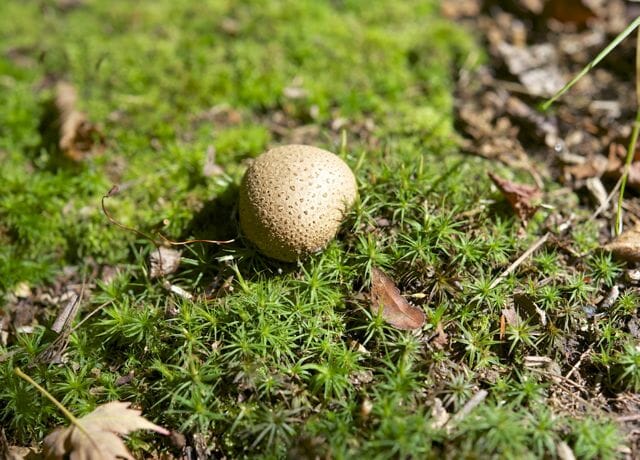 And the bumpy tan mushroom (above)? “I suspect that’s a ‘pigskin poison puffball,’” said Charley, referring to Scleroderma citrinum. 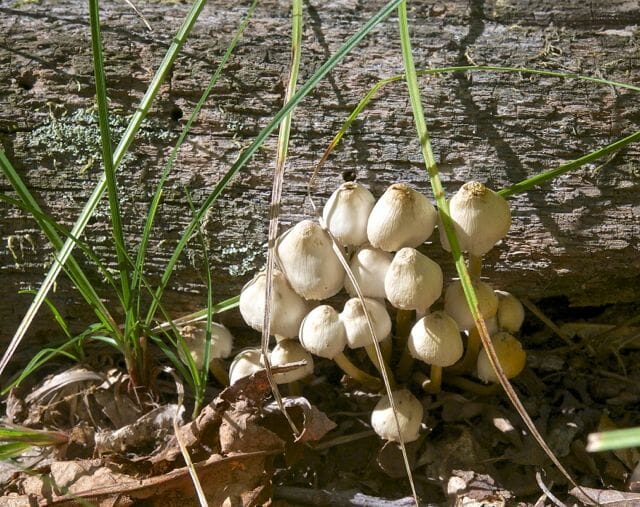 I’ve been using my various mushroom guides to ponder some of the others—like a dense stand (above photo) of tiny white mushrooms (perhaps some species of Mycena?) and some brown ones that developed a neat texture when they aged…and some warty-looking little white ones (perhaps some kind of Lycoperdon)…so many little details to observe, research, identify, and understand. Fodder for many cups of tea, surrounded by a pile of books. All from just one walk. 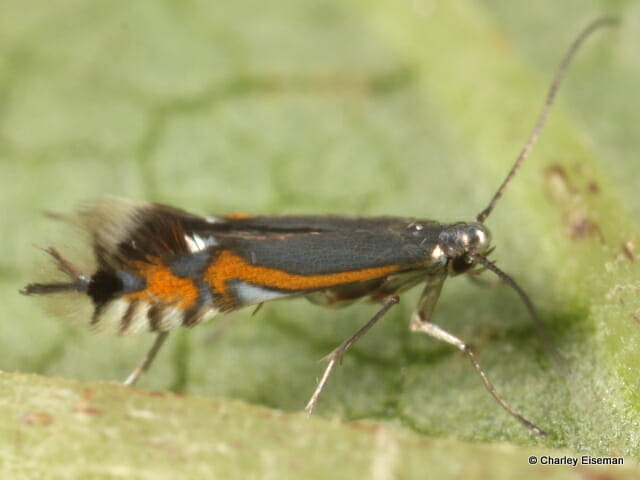 BUT MOST IMPORTANT, or at least most exciting, within a few days, I heard back from Charley by email, with photos attached:

“Two of the Petasites miners emerged yesterday!” he typed with great enthusiasm. “They are Phyllocnistis insignis, as I expected.  I just took some photos of them and sent them on their way–one photo shows a pupal skin projecting from one of the mines.” (Photo of that below; above, the insect itself, hatched from the leaf that used to grow here.) 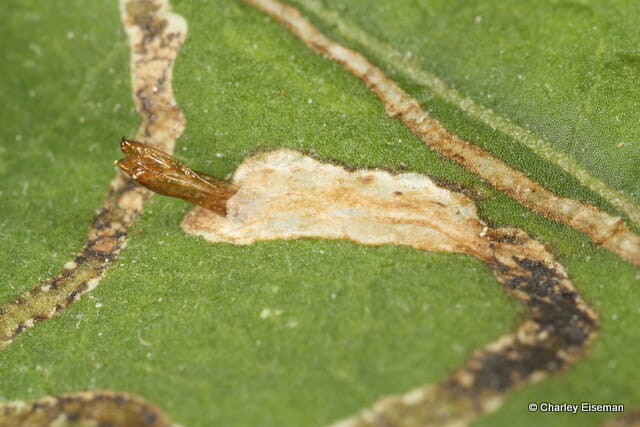 Mission—and much more—accomplished. So can we make “eyes wide open,” our new motto, fellow gardeners?  Yes!

I’VE BOUGHT two more copies of “Tracks and Sign of Insects and Other Invertebrates” to share with you. All you have to do to enter is type your answer to this question into the comments box below:

Seen anything cool during your fall chores in the garden? Or have there been any oddities at other times in the season?

IIf you’re feeling shy or have no answer, no worry. Just say “Count me in” or something, and I will. I’ll pick two winners at random after entries close at midnight on Saturday, October 26. Good luck to all.

Categoriesinsects & worms mushrooms & other fungi slideshows
Tags
charley eiseman
Radio Podcasts
a way to garden podcast
Margaret's weekly public-radio show, from Robin Hood Radio in Sharon, CT, the smallest NPR station in the nation. Listen live at 8:30 AM EDT Mondays, to the replay Saturday morning, or stream the podcast anytime. LISTEN OR SUBSCRIBE FREE: Get the iTunes version; find it on the Stitcher app; or on Spotify, or your favorite podcast app. Browse past interviews below.
Podcast Archive

galls, leaf mines and other tracks and signs of insects (win a field guide!)

READERS REGULARLY EMAIL ME with photos of things they can’t explain, asking for ID’s of balloon-like structures on leaves and twigs; leaves chewed up in..
Read More
s
July 13, 2014
17 Comments