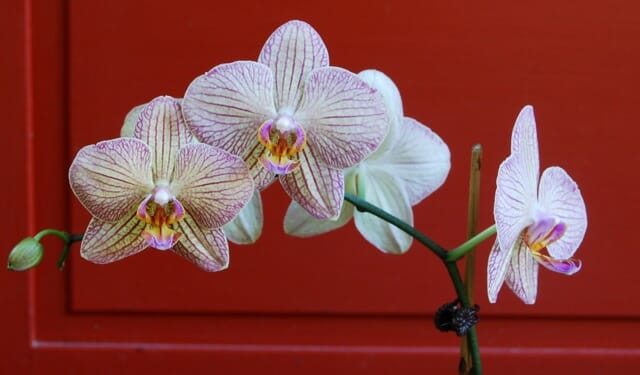 I AM PROUD TO SAY that I have rebloomed my first orchid, no big deal to many of you out there but something I had always stashed in my mind as “difficult” or “impossible.” In fact, it was really easy.

I confess to having harbored longtime anti-orchid feelings, frankly, and hadn’t even owned an orchid, unless you count the occasional cut Cymbidium I buy from a nearby greenhouse in winter. That is, I hadn’t owned a plant until I moved to my former weekend home way outside the city last winter and got a little lonely for company.

I brought a Phalaenopsis home from the local garden center around the holidays on total impulse, and it flowered for four months in my dining room, which astonished even me. The $30 price seemed steep at first, but month after month, that orchid paid me back for my indulgence. After such a performance, I just couldn’t compost it. I’d grown attached.

I knew the basics of orchid care, having written on the subject many times. The highlights:

Overwatering is the best way to kill an orchid, which wants a really thorough soaking but on an infrequent basis, only when needed. Adding half-strength orchid fertilizer to the water every couple of weeks is all the food that’s required. I add the indicated amount of fertilizer to a big bowl of water and simply plunge the pot into it every week or 10 days, depending on how the bark medium around the roots feels to my finger when I poke around in it each week. Conditions vary, and watering can be more frequent or less; the finger test is the only way to know the right moment, just before they get dry.

I am sure to let the excess liquid drain from the orchids potting medium, especially if the pot will be slipped inside a cache pot or sit in a saucer of some kind where water could collect. These are epiphytic plants, and don’t ever want to stand in water.

The Phalaenopsis’ other minimal requirements: cutting off the flower spikes when bloom is finished, and repotting when the planting medium (whether bark or moss) gets depleted. In other words: so simple.

Phalaenopsis, perhaps the easiest orchid to grow in average home conditions, requires relatively low light, such as an east window or a shaded west or southern one. Phalaenopsis are happy in temperatures we can tolerate: around 60 at night, warmer during the day. Just now I’ve moved my plants (yes, plural, because I am now addicted) to the mudroom, where they’ll get a little cooler, to the mid-50s, for a few weeks each evening to help induce their flower spikes. Then they’ll come back into 60-plus.

Winter-into-spring is peak Phalaenopsis bloom time, but my first rebloomer (pictured up top) began its resurrection in September, a little early. It had summered outdoors with its new sisters and brothers in the high shade of a tree, getting indirect light and enjoying the humidity, and I’d kept up the regular feedings.

Now that the plants are indoors, and the heat is coming on, I’ll place them on some pebble trays of water (not standing in it, but raised above it) to create a slightly moister microclimate, and group them among my many other houseplants to add to the effect.

The Greater New York Orchid Society homepage offers PDF downloads of all the American Orchid Society’s  cultural how-to’s, including Phalaenopsis (the links are in the lower right-hand column).  Have you had an orchid success (or failure) using these or other tricks?  I’d love to hear, now that I’m an orchid grower.

RIGHT ABOUT NOW, countless orchid plants in homes everywhere—plants perhaps gifted to their owners, or others we bought for ourselves on an impulse when in..
Read More
f
September 19, 2020
183 Comments

faithful houseplants to hunker down with, with marc hachadourian of nybg

WHO ARE YOU going to tuck in with this fall and winter, as the garden starts to rest and we are all indoors more? Do..
Read More