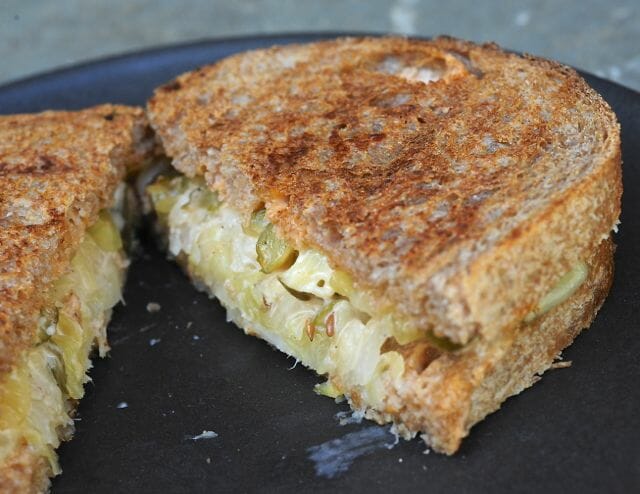 WHEN WE ARE PUSHING HARD to get the garden “open” for spring or “closed” in autumn, my trusty helper and I come up with incentives—usually in the form of food. “Treats,” we call them, or “employee benefits”—whatever it takes to get to the finish line despite the to-do list that’s far too long for too-few hands. “Let’s make the Reubens tomorrow,” she said, after a relentless day of chores, and the next work day we did. Vegetarian Reuben sandwiches, specifically; hold the corned beef.

I know; this recipe doesn’t involve garden-fresh produce the way I do it (though I do make dill pickles from my own cucumbers–and I’m including a vegetable-using variation, too). But I wanted you to know that I go a little crazy diet-wise sometimes—all in the name of the garden, of course. As Reubens go, though, these are pretty tame.

The George Foreman grill I received years ago, when I was a guest of my former boss on “The Martha Stewart Show,” figures into the recipe. But you could use a heavyweight (get it?) seasoned cast-iron pan, with another heavy one or a brick as a weight to press the sandwiches down while cooking. The entrepreneurial ex-heavyweight champion had been a guest on the television show, too, and everyone in the audience got gifted a grill.

I don’t have many kitchen gadgets, or much counter space—and was going to give it away, so I put it in the garage, where my garden helper saw it. And hence the Reuben sandwich tradition, our most indulgent employee benefit, began.

Guaranteed to spur exhausted gardeners onward (or send them straight to the nearest lawn chairs for a long nap). 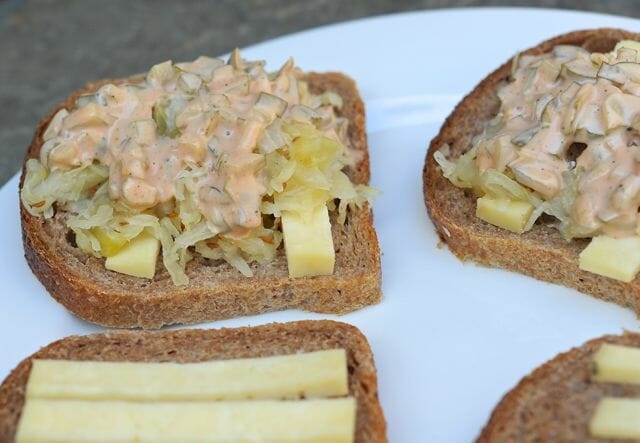 Categoriesentrees
Radio Podcasts
a way to garden podcast
Margaret's weekly public-radio show, from Robin Hood Radio in Sharon, CT, the smallest NPR station in the nation. Listen live at 8:30 AM EDT Mondays, to the replay Saturday morning, or stream the podcast anytime. LISTEN OR SUBSCRIBE FREE: Get the iTunes version; find it on the Stitcher app; or on Spotify, or your favorite podcast app. Browse past interviews below.
Podcast Archive

THINK TEMPLATE–not as in cookie-cutter, but as in a key to culinary empowerment. A dozen or so smart, simple templates (like a frittata, gratin, or..
Read More
q
May 5, 2014
505 Comments

WITH MONTHS OF GARDEN HARVESTS and farm markets ahead and “The New Vegetarian Cooking for Everyone” recently out, I rang up Deborah Madison from her..
Read More
o
November 19, 2016
215 Comments

of grandmothers, gardens, and thanksgiving, with katrina kenison

AT THE HOLIDAYS we surround ourselves with family and friends, and so with Thanksgiving just ahead, I wanted to do just that on the radio..
Read More