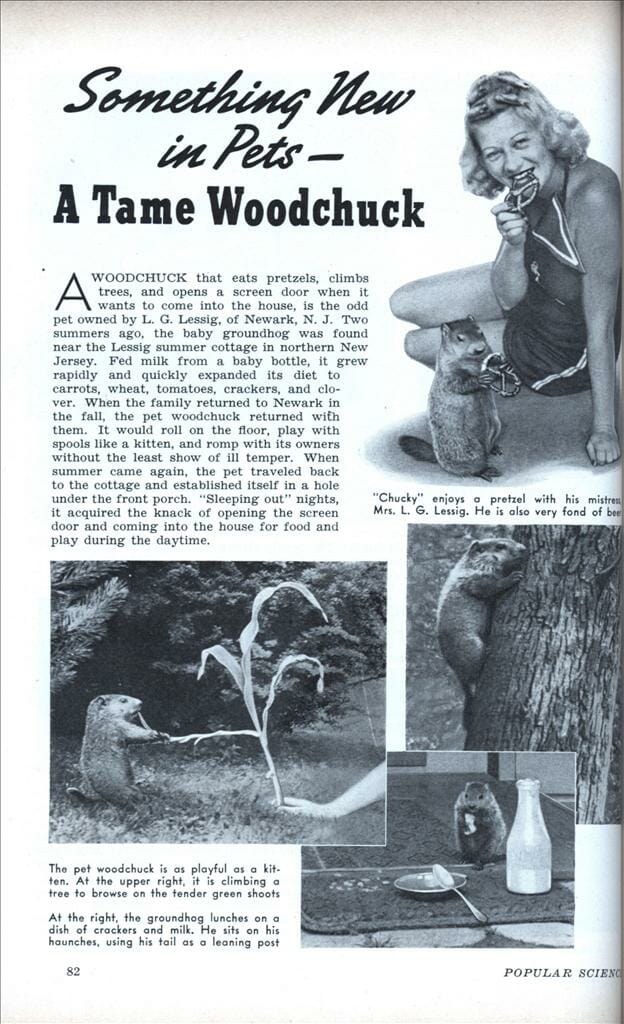 ON GROUNDHOG DAY I am always reminded of another holiday: the Fourth of July, and specifically my first Independence Day on this piece of land, decades ago. To mark Groundhog Day, I offer a vintage essay on trying to fool Mother Nature, and being proved the fool instead.

It was a different winter then, and in so many ways a whole different era, but I think there’s still something left in this old piece of writing, anyhow (though not a definitive answer on how to outdo a woodchuck, sorry; that’s over here instead.). Enjoy.

TODAY IS THE DAY when thoughts officially turn to the potential coming of spring, but on Groundhog Day, my troubled mind can’t let go of memories of Fourth of July. Just the mention of anything groundhog, in fact, and those guilt-laden synapses of mine take me right to that Independence Day not long ago and an ill-advised display of underground fireworks.

I tried to off a groundhog with a smoke bomb.

There, I feel better now that I’ve shared it.

At that time, like many city people, I fought the way thing are, or at least objected to it energetically. The first year in the country house, we fought everything, I recall, not just the groundhog (or woodchuck, as we knew him to be called). On the morning after a harsh snowstorm, for example, we tried to travel back to the city, and in this self-important misadventure, learned a whole new meaning for the term respect.

We fought the deer, who for generations had been coming to eat beneath the apple trees we now insisted were ours; the mice, who asked only a warm place–our bedroom wall–to raise their children. We fought the logic that says that moss, not flowers, grows on the north side of a house, and we even fought each other.

Neither skiers nor children eager to fashion Frosty on the front lawn, we moaned about snow simply because it was inconvenient, because it slowed us down. Now, several winters wiser, we pray for the stuff. It is nectar, sustenance. We have seen the devastation a winter windstorm can deal unto the naked garden, where no white blanket lies in place to soften the blow.  When it melts around this time of year, we pray for more with all our might.

Beneath it, all manner of plant and animal life–even the groundhog–might sleep in safety until spring.  Without it, they are like shivering homeless on the city streets.

This February morning, Punxsutawney Phil will raise his sleepy head toward the exit of his manmade bedroom burrow in Punxsutawney, Pa., aided by a human handler whose job it is to make him forecast the season ahead. The Blob, which is what a groundhog looks like, mostly, will either see or not see his shadow, depending on the strength of the late-winter sun. If he does, it’s back to bed for six more weeks; sorry, no early spring. The whole thing stems from an ancient Scotch couplet: “If the sun is bright and clear, there’ll be two winters in the year.”

I, for one, hope winter stays around awhile longer. I hope the rest of the winter, which hasn’t seemed like a winter to me at all yet, will bring lots of water to the earth in whatever form, however inconvenient, however messy. I hope it snows and sleets and rains and hails all over the country, every day if necessary, because recent droughts are too clear in my memory for me to hope otherwise.

I remember years when a third of the United States, or more, was parched deep into the subsoil, aching for those healing waters. Any gardener who has lost even one lettuce seedling to an unexpected April heat wave, or one potted plant when it baked on the radiator, should realize what that means: Without a proper sequence of the passing seasons, without the “inconvenient” weather like rain and sleet and even snow, there would be no farming and nor gardening, no flowers and no food.

I know, it’s been bright and pretty a lot of recent mornings, and you haven’t had to fight the chapping winds to get to work or school.  Besides, you think, the trouble’s worse in some other region, not mine, and so it’s all right to feel safe and happy that’s it’s spring two months too soon.

It’s not right, and it’s not safe.

My groundhog did not die, by the way, that unpleasantly memorable Fourth of July, he didn’t even bat a droopy lid at the pair of fools who sealed off the doors of his burrow with big stones after dropping a smoke bomb down one end. He just sat up high on his haunches, as his breed is inclined to do, watching from the distant third opening to his subterranean home. If we had more experience, or if we had only asked one of the many local farmers, we’d have known the burrow probably had more than two openings.  We would have known that the groundhog had more sense than two flatlanders, as we of the city streets are sometimes not so fondly called in our unfamiliar rural home.

The rest of the summer–or was I being paranoid?–he seemed to devote to watching me garden, a kind of hairy conscience lingering over my shoulder. All would be well in the garden when, suddenly, a rustling in the brush on the nearby hillside would herald his arrival.

“He’s planning his retaliation,” I would say to myself, wondering what tasty morsel he planned to make his crudite for the day. Day after sunny day, he watched me, until I finally lost it, and began to shout at him with the conviction in my voice that he should listen, that he should understand, that he should even respond.

I was fighting again, a sorry sight, and though he never ate a thing from that year’s summertime garden, the woodchuck had already won.

The image of me and my pet woodchuck comes from this blog. I finally just gave up, and invited him in.

Categorieswoo woo
Tags
Margaret Roach
Radio Podcasts
a way to garden podcast
Margaret's weekly public-radio show, from Robin Hood Radio in Sharon, CT, the smallest NPR station in the nation. Listen live at 8:30 AM EDT Mondays, to the replay Saturday morning, or stream the podcast anytime. LISTEN OR SUBSCRIBE FREE: Get the iTunes version; find it on the Stitcher app; or on Spotify, or your favorite podcast app. Browse past interviews below.
Podcast Archive

woodchucks i have known, not loved

IN MY CURRENT CHAOS OF ICE DAMS ON THE ROOF and ever more, more, more snow on the ground, I almost forgot to raise a..
Read More
t
February 2, 2010
20 Comments

LET’S RAISE A GLASS TODAY TO RELOCATED GROUNDHOGS, toasting the ones we managed somehow to outsmart. That’s one such captive in the garbage can, above—remember?—about..
Read More
g
February 2, 2012
28 Comments

I HAVE LITTLE (NOTHING?) GOOD TO SAY about woodchucks, Marmota monax, even on their namesake Groundhog Day today. The only American animal with a holiday..
Read More