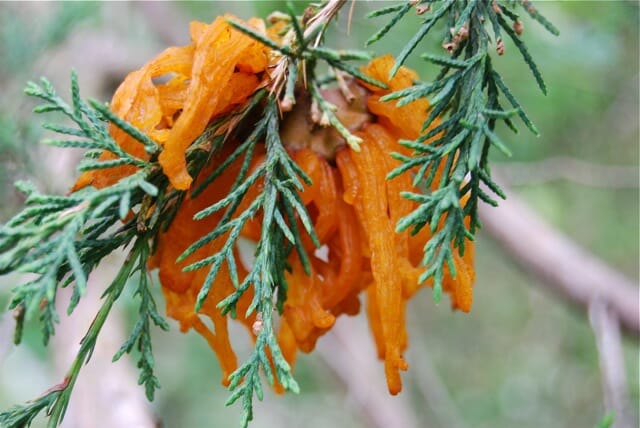 I NTO EVERY GARDEN SOME PESTS MUST FALL. And creep, and crawl, and hatch, and wriggle, and pupate, and fly and tunnel, and just plain materialize and cause havoc. Paradise (or so the tour guests called it recently) has its share of troubles this year, more than I’ve ever seen, actually. Am I paying stricter attention, or are they out to get me in a bigger way than in years past? Hello lily beetles, viburnum leaf beetles, tent caterpillars, various fruit-tree borers, and my old friend cedar-apple rust (above). How are we going to learn to get along? Or are we?

CEDAR APPLE RUST is having a banner year here. So what do you do when you live with warring roommates? In the case of the back-and-forth rounds of battle between the towering Eastern red cedar (Juniperus virginiana) in my front yard and all apples and apple relatives around the place, nothing.

Well, I do watch in fascination, especially at the stage of cedar apple rust above (a few weeks ago), when orange, almost gelatinous “telial horns” are developing where the cedar galls were last fall and winter. I don’t intervene, despite the havoc this fungus causes, particularly foliar damage and defoliation of apple relatives (the reason my shadbush, or Amelanchier, and my oldest of apples lose their leaves so early each year; the reason I don’t even try to grow hawthorns).

Quince, crabapple and pear are some of the other plants similarly affected. Learn more about the fungus these host species pass back and forth like a hot potato (the entire cycle is diagrammed here, in a pdf). 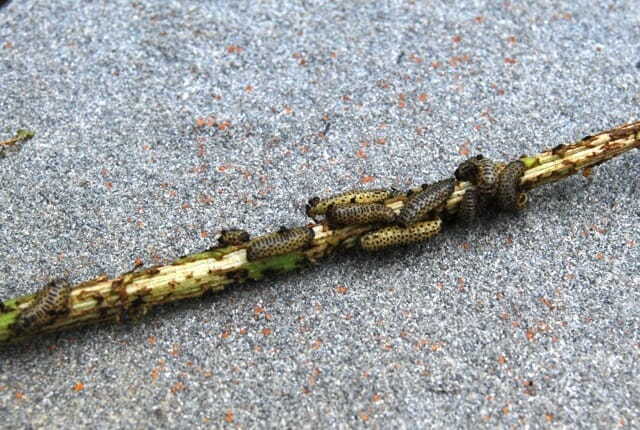 VIBURNUM LEAF BEETLE: Someone on the blog recently said, “I can’t grow Viburnum because of the leaf beetle,” and I replied, “I’ve never had it here.” Famous last words.

My garden relies heavily on Viburnum, as do my beloved avian companions, and I bet there are more than 30 shrubs of numerous species and varieties in the garden. I have lost track.

One day in 2009, from a distance I noticed a catbird was intent on what looked like a dead shrub in the distance, but up close turned out to be a defoliated (but alive) Viburnum opulus, the cranberrybush viburnum. The catbird was having a wild time eating a glut of larvae (above) of the viburnum leaf beetle, who had just finished eating the foliage of the shrub. The food chain at work…until I interrupted it and squashed about 500 of them and cut off the worst branches, bagging them tightly for the trash.

I should have done this between October and April, before the eggs hatched into larvae; now I know.

Around the place I went, checking every Viburnum, expecting the worst. But only a couple of cranberrybush types that, like the defoliated one, were growing in pretty substantial shade, had any leaf damage, and slight at that. But why? Apparently there is natural resistance in many species, and you can get the list here if you wish to grow Viburnum but not ones that the beetle and its larvae adore. Onward to… 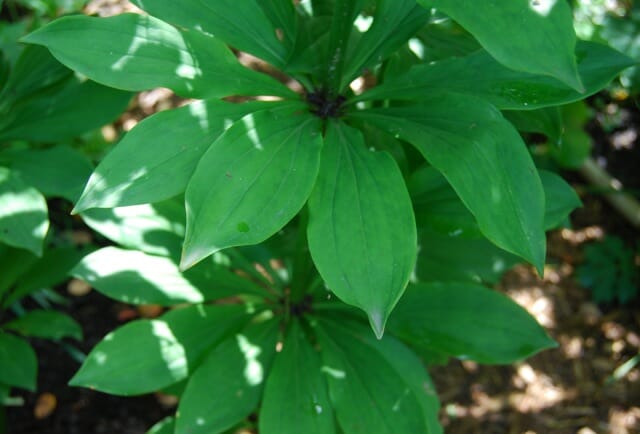 LILY BEETLES: I was likewise cheeky about lily beetles: I don’t have them, I told a reader, who wanted help tackling this voracious leaf-eating pest (above, the leaves before the onslaught). Well, now I do have them, and in fact have drowned many red (adult) beetles in recent years along with many more larvae who were eating my Martagon lilies.

Besides hand-picking, tactics for control friends have tried include Neem oil spray. All about lily leaf beetles and what progress is being made against this pest by researchers is explained by University of Rhode Island’s Lisa Tewksburg in detail at this link. 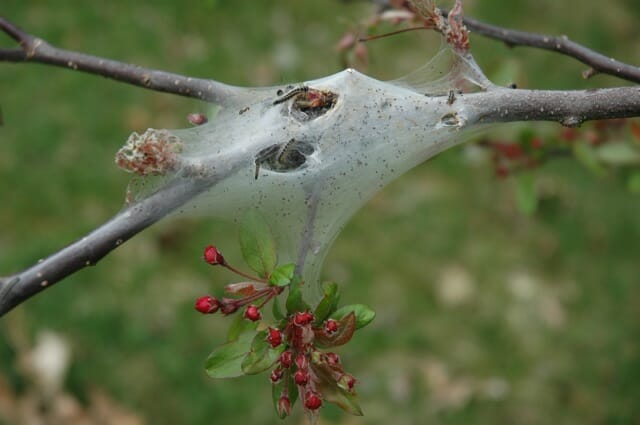 EASTERN TENT CATERPILLARS: I made the rounds in April with my bamboo cane, disrupting any weblike tents (above) I found and squashing anybody inside. As I’ve explained before, I do that to try to reduce the concentration of caterpillars hanging around in my favorite trees. I guess I missed a few; I’m seeing full-grown caterpillars more than I’d like to. Squish! 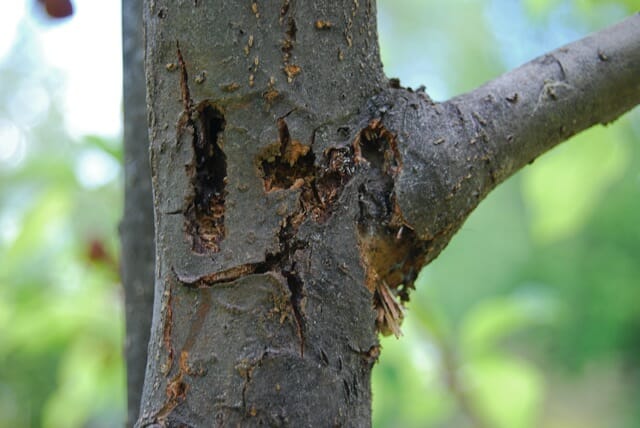 BARK BORERS IN FRUIT TREES: In 2008 I lost one of 10 crabapples to bark borers, and another suffered mightily (jury still out; it’s trying to be vigorous). A third tree (actually newly planted in spring 2008) succumbed in 2009. Here’s what I know about these tiny but disgusting creatures who can quietly fell a tree (including to get out your pyrethrin-based concoctions and a piece of wire to insert into their tunnels if you want to kill them).

As I post this, aphids are making a pass at my honeysuckles, and I know that Japanese beetles will show up by July 4th. Tomato hornworms and all the other annual tomato troubles show up in varying degrees each summer, too, and on and on. Exhausting business this gardening, no?

So who’s been causing trouble in your corner of paradise?

Categoriesinsects & worms Nature organics pests & diseases trees & shrubs
Radio Podcasts
a way to garden podcast
Margaret's weekly public-radio show, from Robin Hood Radio in Sharon, CT, the smallest NPR station in the nation. Listen live at 8:30 AM EDT Mondays, to the replay Saturday morning, or stream the podcast anytime. LISTEN OR SUBSCRIBE FREE: Get the iTunes version; find it on the Stitcher app; or on Spotify, or your favorite podcast app. Browse past interviews below.
Podcast Archive

YES, I HAVE GONE BUGGY. (As I keep saying semi-jokingly, with a last name like Roach, what other outcome could there have been?) The last..
Read More
c
August 20, 2017
18 Comments

I GET A LOT OF QUESTIONS about insect pests, but not just familiar opponents like cucumber beetles or squash bugs and Japanese beetles. In recent..
Read More