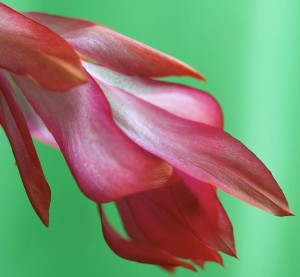 THROW THE POINSETTIA OUT and buy a Christmas cactus. That about wraps up holiday gift-plant Tip Number 1, in answer to the most popular midwinter plant question of all: “How do I care for my poinsettia and make it rebloom?”

Tip Number 2: CHRISTMAS CACTUS is another story altogether. I grew one plant for more than 20 years, a family hand-me-down, that only perished after literally falling apart because it got so big and brittle and I had to move it, sadly, which did it in. The plant’s requirements are simple: Though its name says “cactus,” this isn’t some desert creature inclined toward basking in blazing sun, but rather a tropical forest native and an epiphyte at that (a plant that in its native habitat doesn’t grow in soil at all but nested in trees). Bright indirect light is fine; full sun will burn its tissue, which sometimes reddens up first, as if slightly sunburned, like it’s trying to warn you you’re getting close to the danger zone.

No drafty spots for Schlumbergera up against a winter window, nor any radiators (what plant really likes either condition?). It can withstand temperatures in the 40s, if need be, but not the violent blasts of hot and cold, hot and cold.

As with many plants, it’s spare the rod and spoil the child with Schlumbergera; a little discipline works wonders (amaryllis and Clivia are two others that like tough love). I let the Christmas cactus go dry in late summer for a month or so around August, then start watering again sparingly in mid-September, when it also appreciates one or both of two additional triggers–14 hours of nightly darkness and/or cooler temperatures–to set the best blooms.  Even a month of covering the plant at night with a black plastic bag will do; some experts recommend eight weeks. The lazy-person’s method (mine) of drying it off in August and giving it a cooler spot thereafter, often forgetting the bag, seems to work just fine. In spring and summer, it’s the usual houseplant routine: feed and water regularly.

One more tip: Don’t jostle the Christmas cactus around, especially not during bud-setting time, nor expect it to manage in the super-low humidity of our winter interiors. Both are anathema to prolific blooming (and both can also cause the plant to drop those fleshy leaves, not just flower buds). You may have learned this the hard way when you bought a Christmas cactus: Once home, it sulked, and promptly dropped its flowers or buds. A tray of pebbles and water for it to stand on or some other conscious humidity-enhancer is appreciated by Schlumbergera.

Tip Number 3: KALANCHOE naturally responds to shorter daylength that we experience around October onward, so it makes a pretty willing year-end bloomer even without much special help.  Its succulent foliage is giving you a hint that it doesn’t want to be sodden, ever: Allow to dry between waterings, and grow in a well-drained potting mix. Kalanchoe will sulk in low light, and is a sun-lover, so the brightest spot you can offer will be appreciated.

Deadhead spent flowers and pot the plant up a pot size as spring approaches, and summer it outdoors where possible. One detail: The plant wants about 12 weeks of nights that are longer than the days to come into bloom, so if you are determined to have it color up for Christmas, perhaps fake a few weeks of shorter daylength in mid-September onward, using the black plastic bag method above. Otherwise just be content to perhaps have your show in January (particularly if your house is on the very warm side, which can conspire to cause delay of bloom a bit as well).

Tip Number 4: FLORIST’S CYCLAMEN. My sister, Marion, a master of contrarian horticulture who stashes thing in radiator covers and all employs kind of other tactics “that cannot work” but do, grew one gift cyclamen for years and years, in the master bathroom of her house. Until then, I’d always had these on the “throw it out” list, unlike hardy cyclamen for the garden that one hopes to coax into perennial happiness. Actually, I still say throw it out, but not right away. Enjoy the foliage after the blooms are spent by keeping it cool and moist, not soggy. When the leaves fade, the tuberous thing wants to rest; let it. Withhold water. If there are no signs of mites or rot, you can water again to wake it back up like Marion does in that cool, bright bathroom of hers.

Tip Number 5: PAPERWHITES. Garbage; into the garbage, as they won’t bloom again (except in warm zones, in the ground, though they may skip a year after indoor forcing before doing so). If you really want to know more, or wish to force some now, try this recent post. 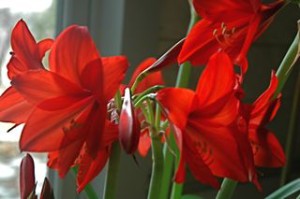 Tip Number 6: AMARYLLIS. I rest my bulbs for two months or so each fall, starting when cooler weather prompts me to bring them back indoors. From September to November or thereabouts, they sit on their sides, pots and all, in a little-used closet with almost no light and absolutely no water.  Don’t expect to win these bulbs over to your schedule, at least not the first year after you adopt them, even with strict timetables like mine.

One of my favorite recent varieties, ‘Supreme Garden’ (shown), is reminding me of that fact this winter. Try as I might to wake it up completely, forget it. It’s had three green leaves since November, which appeared right there in dark storage defiantly, when it hadn’t had a drink or any light in weeks. Though I started re-watering it when I saw the sign of life, it did nothing more then or in the last six weeks.

As I recall from last year’s post, it’s a tardy creature, blooming in April; I expect a resurrection in another month or so. A final amaryllis detail: Don’t overpot. They are fine with a container perhaps an inch bigger than the bulb around in all directions.

Still determined to nurse that poinsettia along in your office or home? Ask the Paul Ecke family, the world’s leading producer of poinsettias for the nursery trade, how to treat it best. I suspect, however, that like me they’d prefer you toss it and buy a new one. Some things just aren’t meant to be recycled and play better as fond memories.

A SURPRISING NUMBER of people ask me about whether this plant or that plant in my garden or theirs is poisonous. And so when I..
Read More
t
May 26, 2008
30 Comments

MY 2 CENTS IS THAT EUPHORBIA PALUSTRIS is the best euphorbia, or at least for cold-zone gardens that cannot grow the really best ones of..
Read More
g
March 9, 2012
239 Comments

WHAT I MISS MOST about my Martha job: I had other garden geeks as colleagues, and the chance to talk plants nonstop. These days I..
Read More