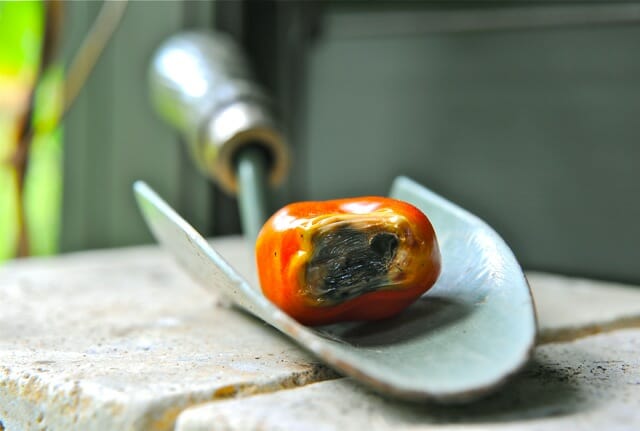 ACCORDING TO MY AUGUST 1, 2010 scientific Facebook focus group (kidding, but four-dozen people did reply to my question about how their plants were doing) it was generally a thumb’s-up tomato year then so far.  But with multiple hot, dry spells locally (even though I had been watering!), I kept worrying about the dreaded blossom end rot. And there it came, as expected—though hopefully not to stay.

Blossom end rot, which (just as it sounds) is a rotting of the fruit that begins as a watery spot on the blossom end, also affects peppers and eggplants. It’s a physiologic disorder—not something caused by a virus or fungus or bacteria, like so many other tomato ailments, but rather by physical stressors that prevent the fruit from taking up enough Calcium to come to ripeness in prime condition.

The watery spot transitions to a dry, sunken lesion (it looks as good as it sounds, above, served up on a non-silver spoon).

Why the deficiency of Calcium, though? What did I do wrong? Various factors can bring it about, including soil that suddenly goes dry (as in a fierce heatwave), excessive fluctuations in soil moisture, over-application of high-Nitrogen fertilizers (not guilty!), root-system damage, or the excess of other soil salts, among other causes.

Like many of my Facebook friends (join us there?) from the Finger Lakes to Tucson, Michigan to Massachusetts, at that time, I did see this, though: generally late ripening. I was just then starting to get my first tomatoes, despite all the heat (which actually can slow down fruit set, as counter-intuitive as that may seem with a heat-loving crop).

And so I waited for enough fruits for that thrilling first pot of sauce. What about you? What’s the view into your slice of tomato life?

Categoriespests & diseases tomatoes vegetables
Radio Podcasts
a way to garden podcast
Margaret's weekly public-radio show, from Robin Hood Radio in Sharon, CT, the smallest NPR station in the nation. Listen live at 8:30 AM EDT Mondays, to the replay Saturday morning, or stream the podcast anytime. LISTEN OR SUBSCRIBE FREE: Get the iTunes version; find it on the Stitcher app; or on Spotify, or your favorite podcast app. Browse past interviews below.
Podcast Archive

Q. I am worried about another outbreak of late blight, after 2009’s epidemic. Can I do anything to prevent tomato disease? Q. What are those..
Read More
w
August 13, 2008
72 Comments

waiting, waiting (for a ripe tomato)

WELCOME TO TOMATO WEEK, A CELEBRATION OF (GREEN?) TOMATOES. Deb at the Dinner Tonight blog and I are glad to have you with us for..
Read More
w
July 24, 2020
24 Comments

THE PURSUIT of perfection in tomatoes can be an elusive goal: The foliage gets spotty or yellow and may even start dropping; fruits may be..
Read More