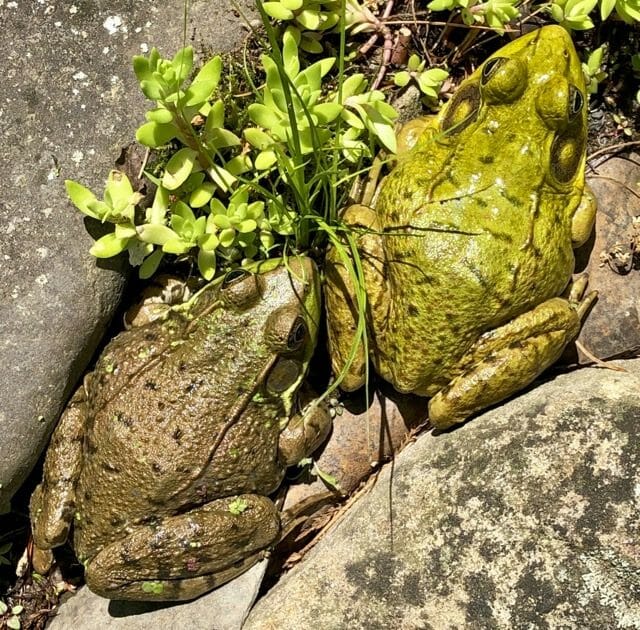 THE LIGHT-HEARTED news from Nowheresville as June begins: I am short on garden help these days and long on frogs. Too bad the latter just lie around having a hot stone massage for hours and hours (above) in between brief bouts of chasing each other frantically for you-know-what. (In frogspeak they call it amplexus. Sounds sophisticated but it’s just you-know-what.) 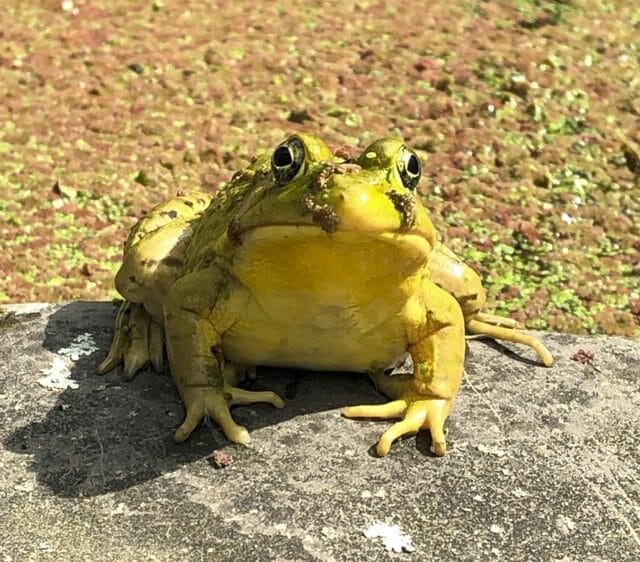 Um, yes, that’s one of the many around here: a gentleman caller, flocked in some tiny floating plants. The individuals who color up yellow during mating season are the gentlemen, at least among the species greenfrogs, like this guy, and their cousins the bullfrogs. (How to sex a frog.) 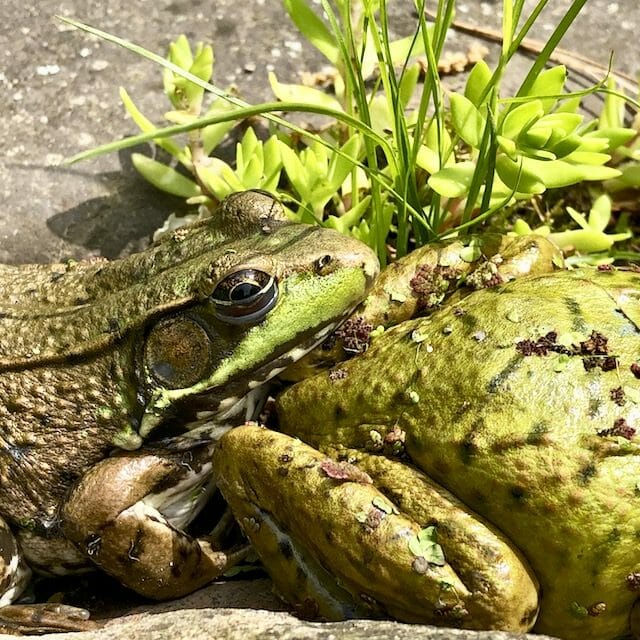 These two (the same individuals from the top-of-page photo) are still at it. A week before, she hadn’t yet discovered that his thigh was a dandy pillow, but now she knows. See her nictitating membrane (aka third eyelid)? Like built-in goggles for underwater vision, the membrane then keeps eyes moist when on land. And yes, it’s true; I could just watch frogs all day. #beatsmowing 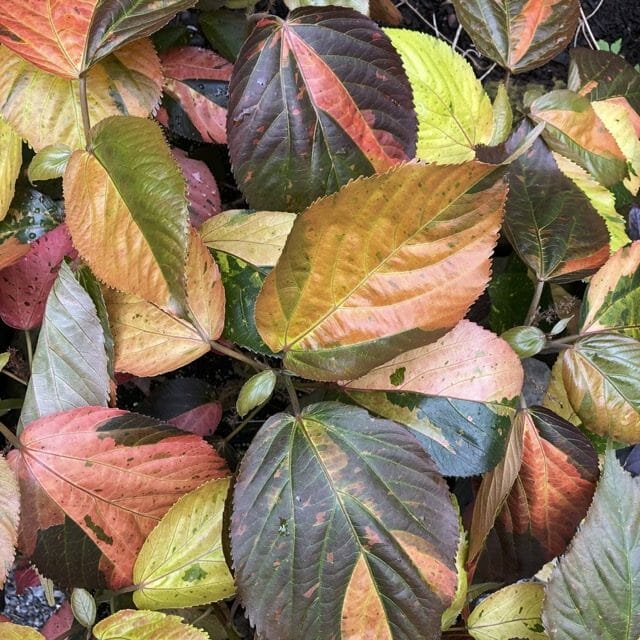 When I am not crawling around communing with frogs, I like foliage a lot, too (more than flowers, even). This copper-leaf plant or Acalypha called Giant Leaf is a favorite (distributed to garden centers by Landcraft Environments, wholesaler source of many gems over many years; thanks Dennis Schrader and Bill Smith).

Most are from places like the South Pacific, and used here as “annuals,” but last year I learned that one of my most common “weeds,” an inconspicuous thing I have in ample supply, is a native Acalypha sometimes called three-seeded mercury that spans more than half the nation, Acalypha virginica (or maybe similar-looking, widespread A. rhomboidea; both occur in my county), and that California has its own native species, too. BTW the more familiar chenille plant is Acalypha hispida.

Being a plant nerd (or a frog nerd) isn’t a bad thing. After all, life is all about the connections, isn’t it?

Categoriesannuals & perennials frogboys Nature
Radio Podcasts
a way to garden podcast
Margaret's weekly public-radio show, from Robin Hood Radio in Sharon, CT, the smallest NPR station in the nation. Listen live at 8:30 AM EDT Mondays, to the replay Saturday morning, or stream the podcast anytime. LISTEN OR SUBSCRIBE FREE: Get the iTunes version; find it on the Stitcher app; or on Spotify, or your favorite podcast app. Browse past interviews below.
Podcast Archive

A SURPRISING NUMBER of people ask me about whether this plant or that plant in my garden or theirs is poisonous. And so when I..
Read More
m
July 1, 2018
8 Comments

moquitoes & water gardens; ants in pots or on peony buds, and more: q&a with ken druse