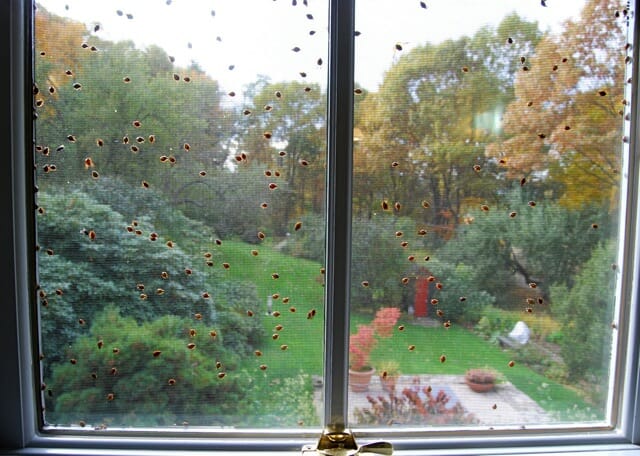 IS THAT A LEAK I HEAR COMING FROM THE UPSTAIRS BATHROOM? Oh, right, no; if it’s October, it’s just the annual shower of Asian lady beetles dropping, one by one, off the screen or the outer window onto the sill–drip, drip, drip (above). On warm late-winter days around February, the sunniest windows inside the house are abuzz with them again, and the sound is more clickety-clack against the panes as they take off and land again, and again.

These non-native “ladybugs,” introduced by the Department of Agriculture to help combat certain agricultural pests, have made themselves right at home in America—and in my house, too. In fall, the south-facing side of the exterior can be teeming with patches of them, as they look for places to tuck into and overwinter.

The USDA imported lady beetles from Japan as early as 1916 as a beneficial insect, to gobble up unwanted pests on forest and orchard trees, but it was probably later releases, in the late 1970s and early 80s in the Southeast, that took hold. Today, multicolored Asian lady beetles have made themselves completely at home around the United States, easily adapting to regions as diverse as Louisiana, Oregon, and mine in New York State.

As much as I like members of the food chain who devour aphids and soft-bodied scale insects and the like, I am not crazy about Asian lady beetles, at least this time of year, who, looking for the equivalent of the cliffside habitats of their native landscape to tuck into and overwinter, go for houses instead.  It would all be fine, if a little sci-fi, except that they stain things and also emit a bad-smelling compound in self defense (such as when you try to scoop them up and toss them back out the door). Sometimes I have hundreds inside at a time (hello, dust-buster).

I can say with first-person authority that they taste really bad, inclined as they are to jump into the bedside water glass or any other food and drink left unattended and then eaten or drunk from without examining it carefully first. Ugh.

I’m not the only one upset. Apparently native ladybugs have been sulking, too—or is that just a coincidence that their populations seem to have dipped drastically in the last 20 years? The Lost Ladybug Project, a program with funding from the National Science Foundation and conducted by Cornell University, is trying to track the status of native species, and asks for “citizen scientists” (meaning us, and even kids) to help observe and photograph whatever lady beetles of any kind they see, particularly each summer.

Get a pdf ID guide to tell the different species apart, and also see the variations within the Asian species.

But how to stop the annoying swarming of these alien invaders? Drugs, perhaps. Recently, there’s evidence that the compounds in catnip oil help. It’s not ready for prime-time yet, but you might want to talk to your family feline about sharing his or her stash of the good stuff.

CategoriesFeatured insects & worms organics pests & diseases
Radio Podcasts
a way to garden podcast
Margaret's weekly public-radio show, from Robin Hood Radio in Sharon, CT, the smallest NPR station in the nation. Listen live at 8:30 AM EDT Mondays, to the replay Saturday morning, or stream the podcast anytime. LISTEN OR SUBSCRIBE FREE: Get the iTunes version; find it on the Stitcher app; or on Spotify, or your favorite podcast app. Browse past interviews below.
Podcast Archive

HOW CAN YOU KILL this “bad” bug or that one? Well, here’s a thought that does not involve buying some packaged product with unintelligible ingredients..
Read More
c
August 20, 2017
18 Comments

I GET A LOT OF QUESTIONS about insect pests, but not just familiar opponents like cucumber beetles or squash bugs and Japanese beetles. In recent..
Read More
g
September 18, 2016
6 Comments