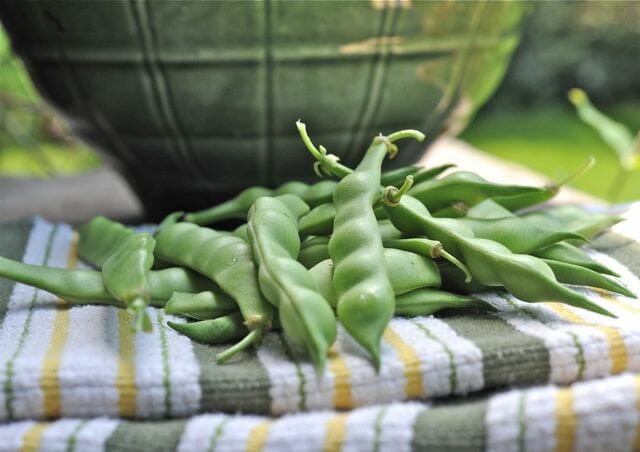 ‘DON’T BE WORRIED WHEN THE SEEDS show in the pods,” the folks at Turtle Tree Seed had told me about ‘Aunt Ada’s Italian’ pole bean; “that’s when this bean tastes best,” they said. But I was worried, anyhow, when I saw dozens of fattening pods on my vines today at picking time, so I took a handful inside, and steamed them quickly to see if I should just pull the entire plant. I was certain they’d be starchy and nasty, like a too-far-gone legume can quickly become. Quite to the contrary: Aunt Ada is a keeper, and a productive one at that—a pole bean I’ll grow again, for certain, great cooked as a green bean or dried for use in soup.

The listing for ‘Aunt Ada’s Italian’ in the catalog from Turtle Tree, a biodynamic seed company and just across “town” here from me, said that the variety came from Italy to Colorado around the turn of the 20th century, with a family called Botanelli. It’s likened to a “small, buttery snap lima” in flavor when steamed. I quickly steamed a bowlful for supper, and drizzled the beans with some olive oil and a dash of salt. Delicious (though admittedly a whole different texture than what you expect from a snap bean, whose seeds are rarely part of each mouthful)!

My vines (supported on a bamboo tripod) are a couple of feet taller than the 6 feet predicted, and they started to bear in about 60 days. Pick them when they are not too big (maybe 3 inches long on average) and the seeds inside are starting to show. From the number of flowers on the plant yesterday despite the good haul of pods, I’d say there are plenty more to come.

Want to use them for soup or another dry-bean recipe? Let the pods go all the way to withered and tan on the vine, and follow the dry-bean how-to here.

This is the second new-to-me heirloom bean I’ve been enjoying this summer, ‘Rattlesnake’ being the other. Any oldtime discoveries in your garden?

Categoriesvegetables
Radio Podcasts
a way to garden podcast
Margaret's weekly public-radio show, from Robin Hood Radio in Sharon, CT, the smallest NPR station in the nation. Listen live at 8:30 AM EDT Mondays, to the replay Saturday morning, or stream the podcast anytime. LISTEN OR SUBSCRIBE FREE: Get the iTunes version; find it on the Stitcher app; or on Spotify, or your favorite podcast app. Browse past interviews below.
Podcast Archive

I’M LATE ON THE ANNUAL TRADITION of posting my seed orders, but finally, here they are.  Looking the list over now, weeks after the actual..
Read More
s
December 9, 2013
356 Comments

THE CONVERSATION CONTINUED about a different kind of seed company–seed companies that don’t just package and re-sell seeds, but actually grow some or all of..
Read More
m
March 17, 2013
14 Comments

my 2013 seed order, heavy on the legumes

MY 2013 SEED ORDER looks kind of crazy—heavy on the legumes, with a side order of salad, broccoli and a few flowers, and not much..
Read More