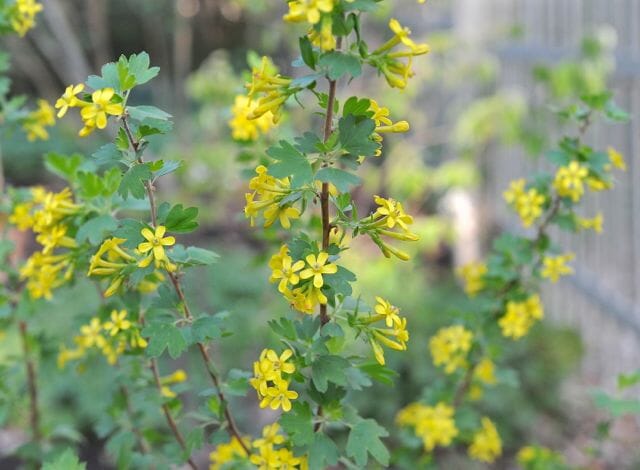 WHAT NATIVE AMERICAN SHRUB smells like cloves right now, with a profusion of golden flowers, and handsome lobed foliage (which will turn nice warm colors in fall)? Another clue: It would have fruit, too, if you had both a male and a female plant. It’s the clove currant, which I know as Ribes odoratum, and woody plant expert Michael Dirr calls it “a rare gem in the shrub world.”

The clove currant, which in some references is listed as synonymous with Ribes aureum var. villosum, is native to the central United States, specifically “Minnesota and South Dakota, south to Arkansas and Texas,” reports “Dirr’s Encyclopedia of Trees and Shrubs.” My friend and fruit expert Lee Reich points out that odoratum and aureum are two distinct species, and grows both (you can see his comment below). 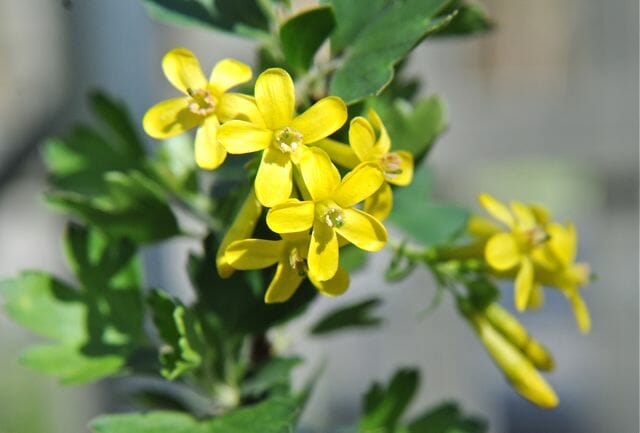 I first smelled the plant in my friend Bob Hyland’s garden—for that is how it goes with this one if you are anywhere near it in spring; your nose leads you to it. Before I even noticed the screaming yellow flowers, I followed my nose. It blooms for weeks beginning around the same time as Amelanchier and then right through Viburnum carlesii and beyond here—and is often still at it along with the start of my lilacs and crabapples. 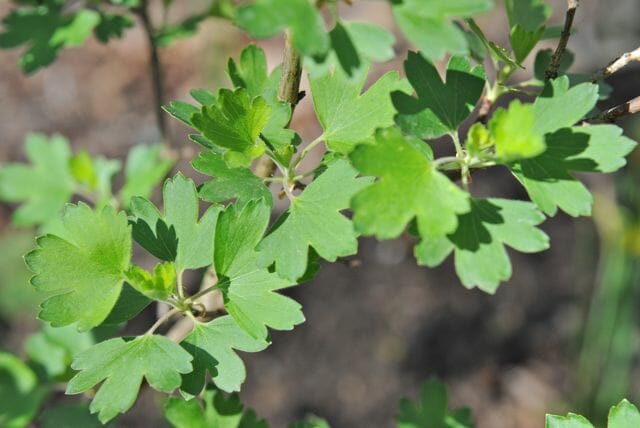 Eventually the clove currant (hardy in Zone 4-8) will get to 6 feet high and wide or slightly larger, and eventually may sucker, forming a colony as it does in nature. Again, if I had a male and a female I’d get fruit–which the birds would be happy about. The variety of clove currant called ‘Crandall’ is the one you’ll find if you can track this plant down, at mail-order nurseries such as High Country Gardens. It would make a great hedge; I planted mine right inside my front gate, so I have to inhale it every time I come and go in its season.

ribes restrictions in some states

ADOPTING ANY Ribes brings up a cautionary tale. The genus Ribes—which includes currants and gooseberries–includes a lot of beautiful and also delicious-fruited plants, but it has a tricky history. Ribes—and particularly non-resistant varieties of the black currant, or Ribes nigrum–can be the host for white pine blister rust, a very serious disease of 5-needled pines including white pine (Pinus strobus), and therefore has been banned at various times in various states. The clove currant is potentially an alternate host, so I offer these disclaimers:

“Fifteen (15) states still maintain various types of bans on Ribes,” says the Missouri Botanical Garden website, “the most restrictive being the total ban on all species in North Carolina.”

New York, where I garden, is not among them, reports the Cornell website, explaining that in the early 20th century the Federal government  banned Ribes to stem the outbreak of the disease, but that the nationwide ban was lifted in 1966.

Categoriesbird sh-t Featured trees & shrubs
Tags
great shrub
Radio Podcasts
a way to garden podcast
Margaret's weekly public-radio show, from Robin Hood Radio in Sharon, CT, the smallest NPR station in the nation. Listen live at 8:30 AM EDT Mondays, to the replay Saturday morning, or stream the podcast anytime. LISTEN OR SUBSCRIBE FREE: Get the iTunes version; find it on the Stitcher app; or on Spotify, or your favorite podcast app. Browse past interviews below.
Podcast Archive

happy birthday to me, and then some

H OW TO CELEBRATE A JUNE BIRTHDAY IN THE GARDEN? By thinking back, and also looking ahead: two traits every gardener needs to cultivate. So..
Read More
r
April 6, 2014
278 Comments

YOU CAN SEE IT FROM THE PROVERBIAL MILE AWAY: Viburnum dilatatum ‘Michael Dodge’ weighed down in its embarrassment of gold fall fruit. Even though it’s..
Read More