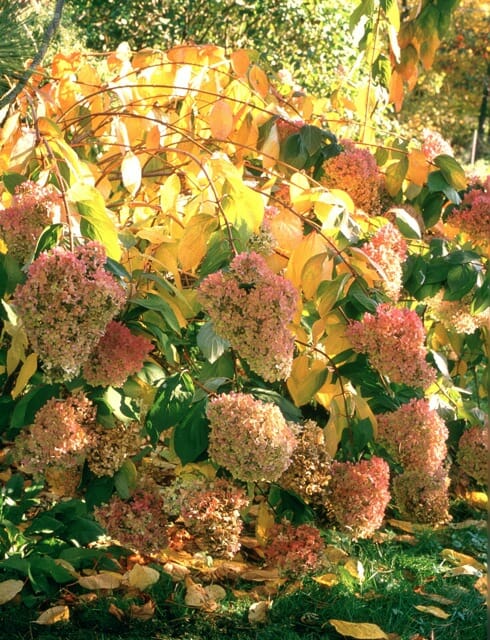 I‘VE NEVER ACTUALLY GROWN A BLUE HYDRANGEA. There, I’ve confessed. But my garden features perhaps a dozen large specimens of Hydrangea from late summer into autumn. They’re all panicle types, or H. paniculata, a somewhat-rangy breed but oh, so delightful to have around now as things wind down.

Not so many years ago, most nurseries only carried the old-fashioned classic we call Pee Gee, for H. paniculata ‘Grandiflora’ (above), with giant conical trusses of white flowers in July that fade to pink and tan as autumn approaches. Perhaps you have a tree form?  It’s the kind of plant often “inherited” along with older houses, and I love passing big ones at nearby farms and gardens at this time of year.

Lately, though, as with so many other plants, there’s a proliferation of available cultivars of panicle hydrangeas, and I have tried many good ones: ‘Kyushu,’ ‘Pink Diamond,’ ‘Unique,’ ‘Limelight’ (an unusual recent color break with greenish flowers), and more that I cannot even bother to recall.  Some have giant trusses, others smaller; some lacier and some more dense.

The straight species they’re all was derived from, H. paniculata, has large flowerheads like the Pee Gee, but they’re more refined, not so overblown…kind of the “lace-cap” of panicle hydrangeas.  You don’t see the species on the market much, but you will find its close lookalike ‘Tardiva,’ to my mind the best of all the paniculatas. Those are its flowers earlier in the season (below). It’s been around for many years, but is finally getting more attention. 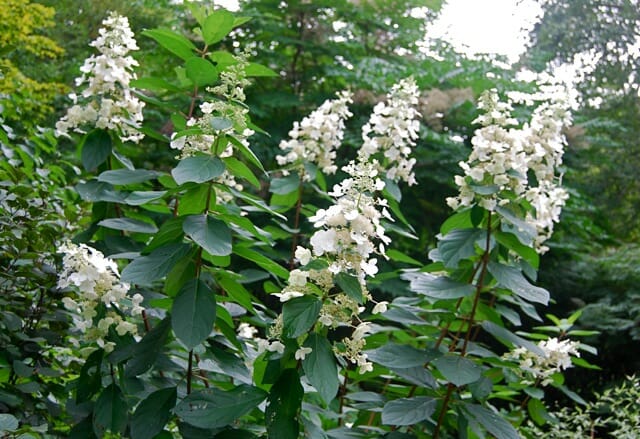 Like the two Pee Gee shrubs that came with my 1880s house, my big old ‘Tardiva’ wants to take over the bed I’ve had it in for a dozen or 15 years. Since they bloom on new wood (unlike the blue H. macrophylla types), they get a hard pruning each April or early May, just before growth begins again, some years resulting in a shapelier creature than others, I’ll admit. I try, but by season’s end, these beasts look more like a giant octopus of branches, a real tangle, and “seeing” the desired cuts can require a truly zen mental state.

And that’s the thing: H. paniculata is definitely a rangy beast, as I say, not a pleasing thing to have in too many front-and-center places, as it looks less than stellar a portion of the growing season.

Since they’re really spectacular in fall, when we’re all feeling a little tired, I prune the biggest-flowered ones like Pee Gee to accentuate that feeling, as in the photo at the bottom of the post. Instead of making my cuts farther back to form a plant that’s upright and tree-like and perky, the blooms literally drip from the branches.

Whichever variety you decide upon, you may notice a difference year to year in the size of the flowerheads, which can also vary somewhat according to how you prune. If you cut the plant back very hard, you’ll likely prompt fewer but bigger flowers; if left to bloom on a twiggy thicket, there will be more but smaller ones.

Bone hardy to Zone 3 (unlike its moptop, blue-flowered cousin H. macrophylla), adaptable to part shade, and a welcome sight from the time the garden starts to burn up in late summer right through the fall: Hydrangea paniculata.  For all its desire to act out and become a wild jungle unto itself, I indulge and even love it. You? Or is blue more your thing? 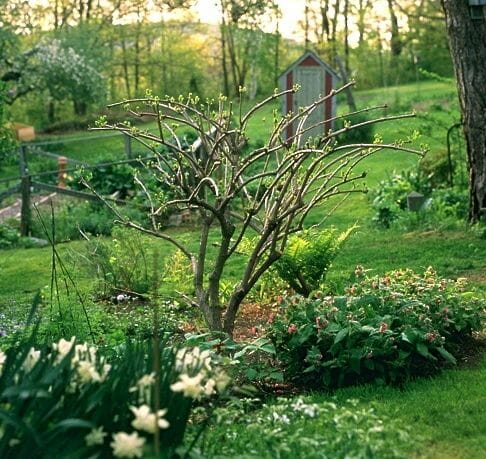 Categoriesdeciduous shade gardening trees & shrubs
Tags
fall gardenpruning
Radio Podcasts
a way to garden podcast
Margaret's weekly public-radio show, from Robin Hood Radio in Sharon, CT, the smallest NPR station in the nation. Listen live at 8:30 AM EDT Mondays, to the replay Saturday morning, or stream the podcast anytime. LISTEN OR SUBSCRIBE FREE: Get the iTunes version; find it on the Stitcher app; or on Spotify, or your favorite podcast app. Browse past interviews below.
Podcast Archive

‘THEY BRIGHTEN our days just as summer heat and humidity become tiresome,” reads a line in the new book “The Art of Gardening,” from Chanticleer..
Read More
b
August 27, 2017
13 Comments

best hydrangeas of now and tomorrow, with dan hinkley

IF SOMEONE SAYS HYDRANGEA, many of us first conjure classic images of big blue moptops, or maybe the paniculata types with their conical white-to-pink-to-tan flowers...
Read More
p
March 20, 2009
36 Comments

WHAT NOT TO DO IS AS IMPORTANT many times as what to do each season, the dont’s as powerful as the do’s. Nowhere is this..
Read More