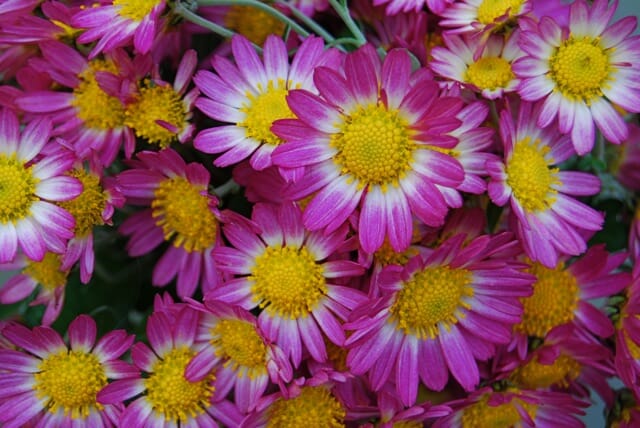 IT ALL SOUNDS LIKE Plantus unknowniensis at the start, but botanical Latin is the mother tongue of gardening, and must be reckoned with. Besides being the only precise way of asking for what you want, it’s often actually quite informative once you get the hang of it.

The genus name, which comes first, is expressed as Latin in an italicized word starting with an uppercase letter. A genus is a group of related species—such as Aster. (The plural of genus is a surprise, by the way: genera, not genuses.) It is not always obvious what the genus name derives from, unless you speak Latin, know the history of botanical exploration, or possess some other equally arcane skills.

Many genera are named for the explorer who discovered them (Davidia, for instance, after Pere David) or someone they were meant to honor (Franklinia, for Ben Franklin, or Dahlia for a botanist named Dahl); others are simply Latin words for what they look like (Aster means star flower).

The species name, which follows the genus, is lower case and expressed in italics. A species is a group of individuals that are closely enough related to interbreed (two distinct species in the same genus typically won’t, with exceptions). Often, the species name tells us something about the plant’s background, such as where it comes from, or what color it is, or how it grows.

Some species names also reflect their discoverer (wilsonii, for instance, or sargentii) or the person they were meant to honor, or a trait of the plant, like its color. Some that come up again and again include virginiana (of Virginia, or the area roughly equivalent to the early colonies), occidentalis (Western), argentea (silver), aurea (gold), lanata (fuzzy), alba (white) and nana (dwarf).

Some are easier than others, and even hint at their English translations, like prostratus and horizontalis, for growing horizontally, and decidua, for deciduous, or variegata for variegated, but don’t get too excited too fast. Memorization is the key to taxonomy, I’m afraid.

Sometimes the plant can be identified even more specifically, because it possesses slight differences from what is called the “straight.” or normal, species. The third word in the name, if there is one, designates the cultivar. Cultivar is short for cultivated variety, meaning a version of the plant, usually an asexually propagated one (a clone), that is known only in cultivation (in gardening circles), and that was selected out of the average population of the species specially for some unusual feature, like variegated leaves or different-colored flowers or a weeping habit. This third word is usually expressed in English (Roman letters) inside single quotes, and begins with an uppercase letter.

A disheartening fact is that even for those who have been memorizing plant names for years: There is always more to learn. Blame the taxonomists who seem insistent on getting everything just right, down to the last chromosome, and keep re-examining plants under high-powered microscopes, pollen granule by pollen granule, and regrouping them.

Coleus, for instance, was for a recent moment no longer Coleus, but Solenostemon; perhaps the biggest shock of all was when Chrysanthemum (like ‘Will’s Wonderful,’ top) ceased to be what we knew it as. Dendranthema and other genera became the new homes to Chrysanthemum’s former members for awhile, then most got switched back again in 1999. If you were hooked on their shorthand name during that chaotic time, sorry, because mum wasn’t the word any more…well, at least not for a moment or two.

The place to get the latest lowdown on who goes where: The Plant List, a searchable collaboration between various esteemed botanical organizations.

I think it’s important to know the right way, but as a gardener being ever-so-precise can have its limitations. In catalogs, reference books and certainly in the aisles at the garden center, the renamed plants will probably still be where they were before the name change, and are likely to stay put for years. I didn’t go try asking for a flat of Solenostemon during that temporary uprising; I stuck with Coleus.

Categoriesannuals & perennials trees & shrubs
Tags
botanical Latin
Radio Podcasts
a way to garden podcast
Margaret's weekly public-radio show, from Robin Hood Radio in Sharon, CT, the smallest NPR station in the nation. Listen live at 8:30 AM EDT Mondays, to the replay Saturday morning, or stream the podcast anytime. LISTEN OR SUBSCRIBE FREE: Get the iTunes version; find it on the Stitcher app; or on Spotify, or your favorite podcast app. Browse past interviews below.
Podcast Archive

BASIC BOTANICAL LATIN confounds beginning gardeners. The worst part: worries about proper pronunciation. I only wish that someone had told me 20 years earlier that..
Read More
i
May 8, 2020
497 Comments

it’s time to learn some botanical latin (and why), with ross bayton

I’M GRATEFUL that when I began gardening, I fell in with a bunch of plant nerds who spoke not in common names but in botanical..
Read More
w
November 30, 2008
8 Comments

warts and all: the ‘bule’ gourd gang

I SEE PERPETUAL, DEEP LAUGHTER IN GOURDS. For that reason, all are welcome at my place; in fact, one moved in with me a few..
Read More