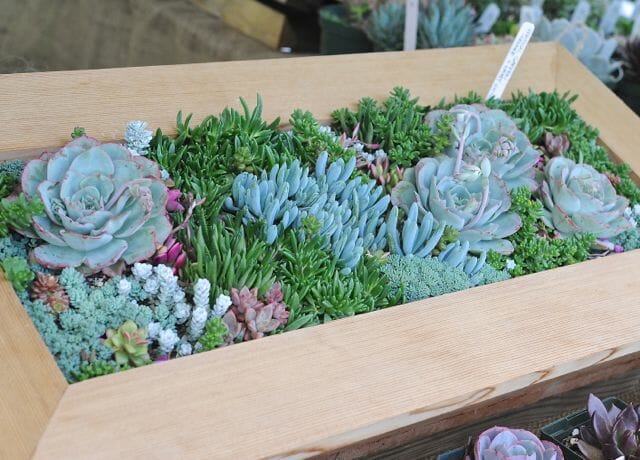 IT WOULD BE HARD not to notice them, because they’re everywhere. Succulents, including many Sedum and Sempervivum and other less-familiar faces, seem to be trying to tell me something this season, as in: “We’re all the rage.” At garden shows and nurseries, and even in my own garden where a few pieces fell out of a pot and planted themselves as if to say, “I belong right here, Margaret,” I feel as if 2013 is the Year of the Succulent. I’m paying heed by starting a succulent wall planting; using them in pots, and more. Some inspiration, and a progress report:

I was already thinking about succulents, after writing a story about succulent-wreath how-to with Katherine Tracey of Avant Gardens. Remember? (That’s another of her creations up top: a box of succulents, meant to be hung vertically, like a framed mini wall garden. Here’s Katherine’s how-to on making a mini-wall garden.) Then during spring garden cleanup, I noticed that some Sedum ‘Angelina’ (a gold-colored, ferny-textured groundcover type) had fallen out of a big pot I’d placed on the terrace last summer, and planted itself in the gravel surface, and the surrounding stone wall. (Again, those succulent voices: “Hint. Hint.”)

The next nudge came when I spontaneously pulled into a garden center last month—one I’d never been to—only to find an irresistibly low price on overstuffed pots of hens and chicks. I brought home a bunch.

And then the final push: At Trade Secrets, the big annual benefit garden show held in nearby Sharon, Connecticut, it was as if someone had announced a theme: Every vendor seemed to be featuring succulents in one way or another. 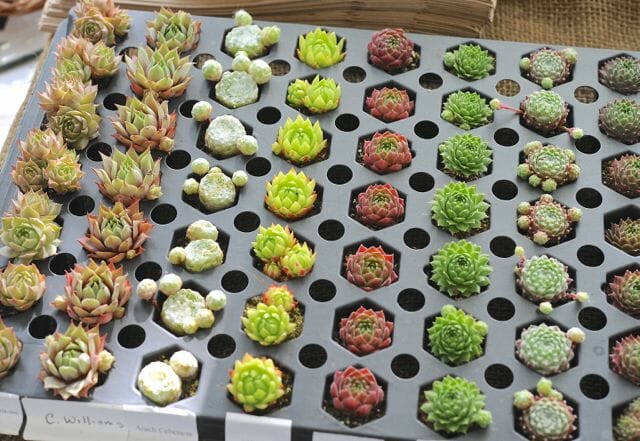 Dave Burdick (remember him?) of Daffodils and More in Dalton, Massachusetts, whose specialties include not just rare Narcissus by mail, but also bromeliads and succulents, was selling little “plugs” (above) of unusual named varieties, perfect for plugging into cracks and crevices. 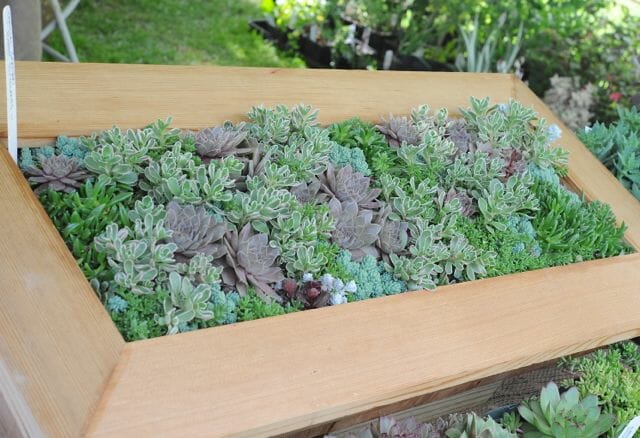 Katherine Tracey of Avant Gardens was exhibiting from over across Massachusetts, surrounded by pots of unusual succulents and also by some of her extremely artistic boxed succulent gardens (contained within expertly crafted cedar box frames for hanging, as in the top photo and just above–fantastic, and here’s how). 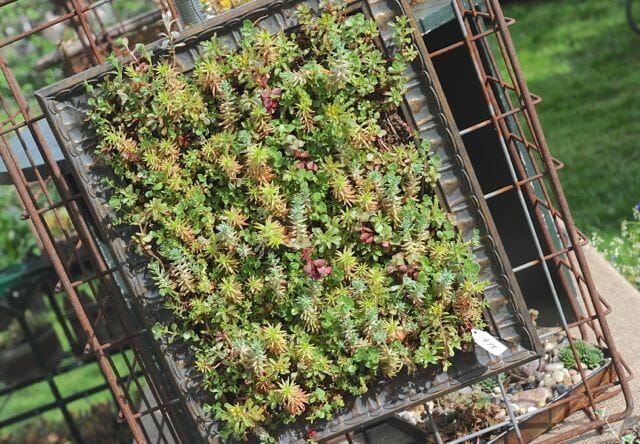 Far less formal but just plain fun: Sweethaven Farm of Salisbury, Connecticut, had stuffed succulent bits and bobs into living chair seats (not for sitting, but hilarious); into old picture frames (above) for a mini-succulent wall effect, and even into muffin tins (below) with spoonfuls of gravel. 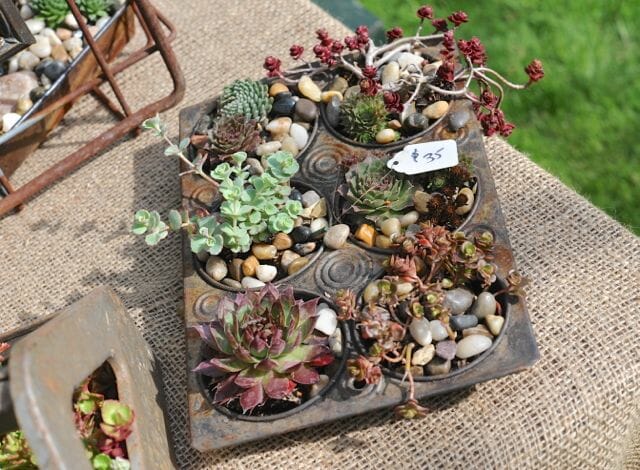 And the duo of Kim Alpert and Erika Hanson (who call themselves Anthropek Gardens, from Yorktown, New York), were making their Trade Secrets debut, showing off their homemade hypertufa containers. 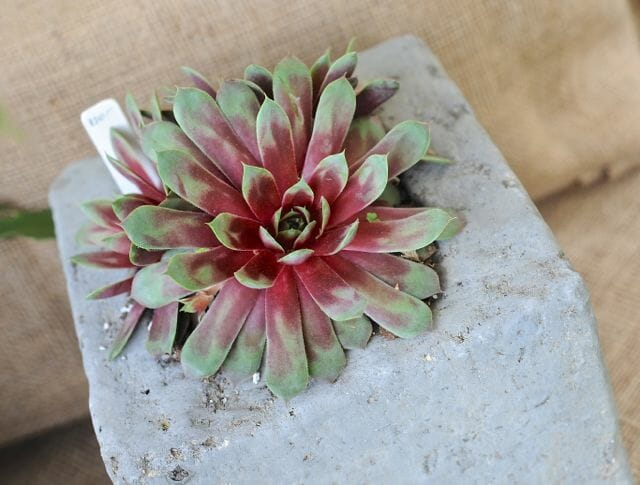 Most of the troughs and pots were stuffed with (you guessed it) succulents. I loved Anthropek’s individual-specimen pots in particular (above and below), each one a little gem, and a garden in itself. 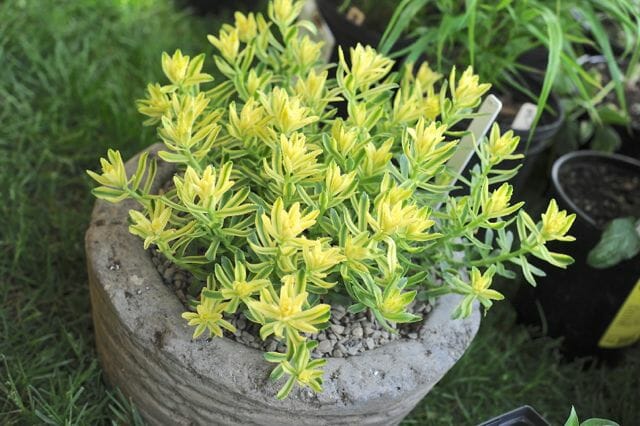 The resounding message: These plants are adapted to even a tiny pocket of soil (or grit, gravel, etc.), and offer instant, long-lasting color and sculptural effect in return. I went home to start breaking apart those bargain Sempervivum I’d adopted, and stuffing them into a strawberry jar (bottom photo), and into the stone wall of the terrace, too (just below, one division in one crevice in the wall). 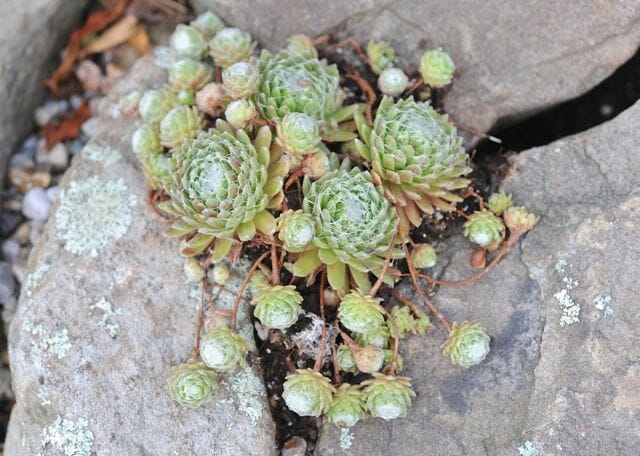 That latter project’s just barely getting started. So far, I’ve only begun on the horizontal surface, but next I’ll use wreath pins or larger earth staples to secure divisions into the vertical face of part of the wall, too.  I need more bits and bobs to work with, so I suppose a shopping trip is in order (I’m also breaking off chunks of my various creeping types, including these). 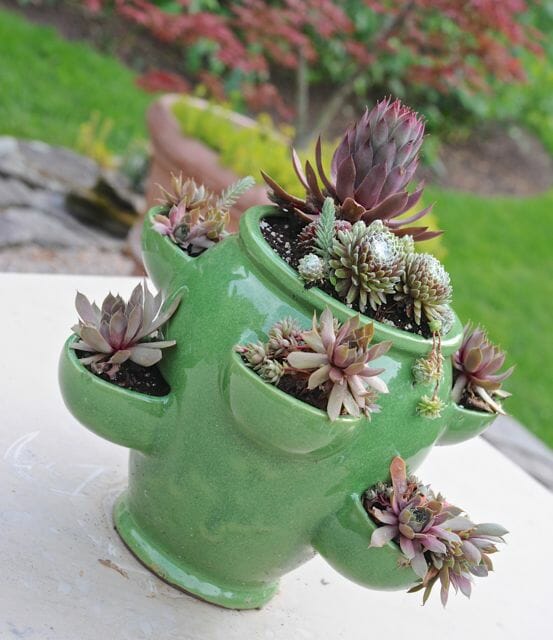 Oh, and maybe some sunshine would help? I’m not sure the pieces I packed into that strawberry jar (above, just-planted) plan to do too much growing in otherwise—or so they seem to be warning me as the forecast calls for rain, rain and more rain.

Categoriesannuals & perennials container gardening groundcovers ornamental plants types of gardening
Radio Podcasts
a way to garden podcast
Margaret's weekly public-radio show, from Robin Hood Radio in Sharon, CT, the smallest NPR station in the nation. Listen live at 8:30 AM EDT Mondays, to the replay Saturday morning, or stream the podcast anytime. LISTEN OR SUBSCRIBE FREE: Get the iTunes version; find it on the Stitcher app; or on Spotify, or your favorite podcast app. Browse past interviews below.
Podcast Archive

I’M ALREADY DREAMING about summertime containers each year, even before the first flat of spring’s pansies arrive in the local nurseries as winter fades. My..
Read More
g
April 30, 2017
5 Comments

ONE RECENT FALL, an unannounced package arrived. Inside was a “bowl” made from a pumpkin whose handle had been removed, with the pumpkin topped with..
Read More
g
April 17, 2016
5 Comments

getting creative with succulent hens & chicks, with katherine tracey

GRANDMA raised them, her darling hens and chicks–and no, I’m not referring to the egg-producing flock of adorable Bantam poultry in my Grandmother’s backyard, but..
Read More