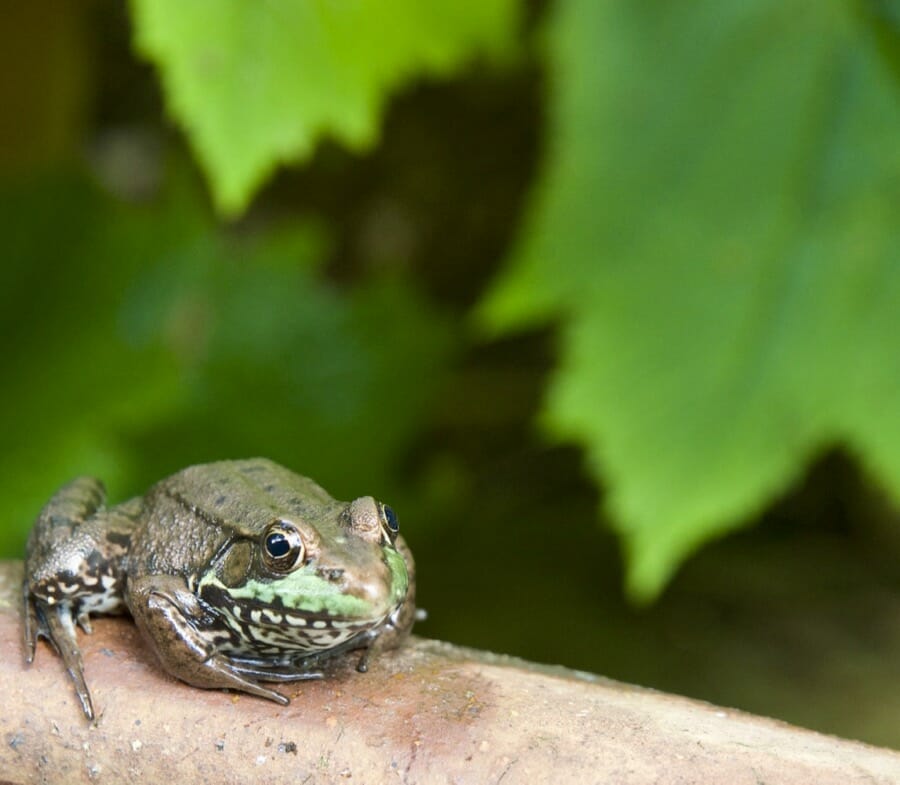 I GOT ON A BIT of a gender kick recently on Instagram, and I blame it on a spider (and a turkey, and a frog)—and also on my endless curiosity. It happened like this: 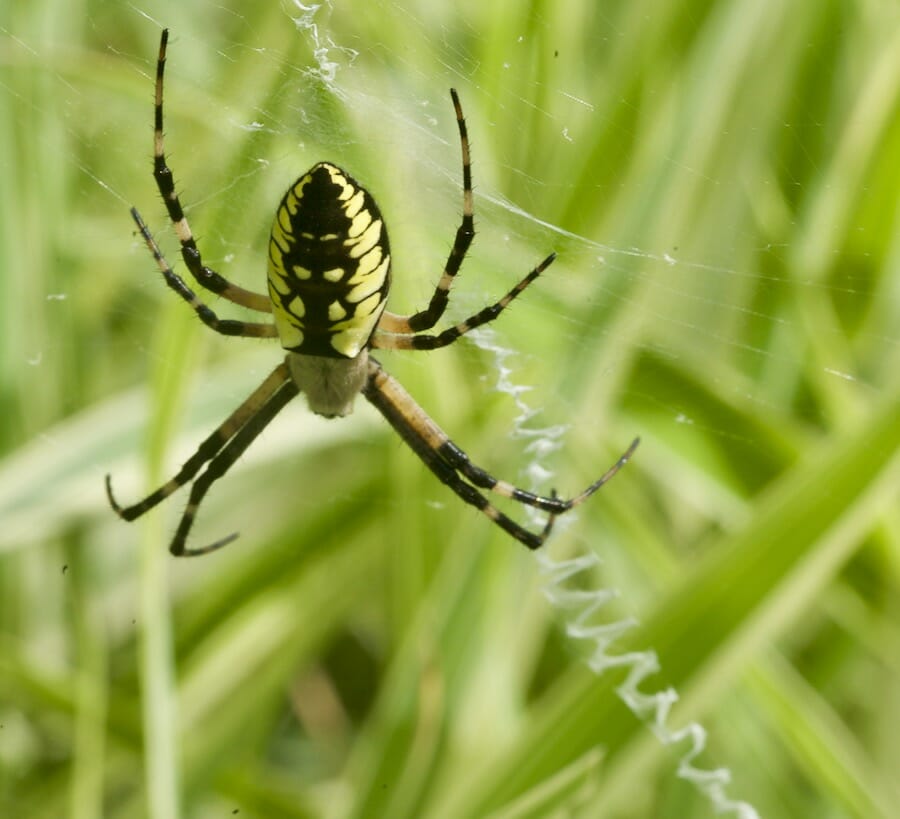 ALONG came a spider the other afternoon, specifically an impressive female garden orb weaver, Argiope aurantia—an extremely widespread species, from southern Canada down to Costa Rica and most of the lower 48 between.

And I say female with a degree of confidence, because of her size (a female of this species can be up to three times a male’s) and also because of the big web she had made.

See that zig-zag stuff in her web? It’s called stabilimenta (word of the day; singular is stabilimentum) and if you get a chance to see the locomotion she gets going to make it, it’s very cool. Whether the zig-zags simply reinforce the web or also help in other ways, such as with prey attraction or advertising to birds not to fly into webs, has been the subject of various research efforts.

More crazy details: I read that the spider eats the web and makes a new one each night. And one reader told me, after I published this story, that Argiope is also called the writing spider. 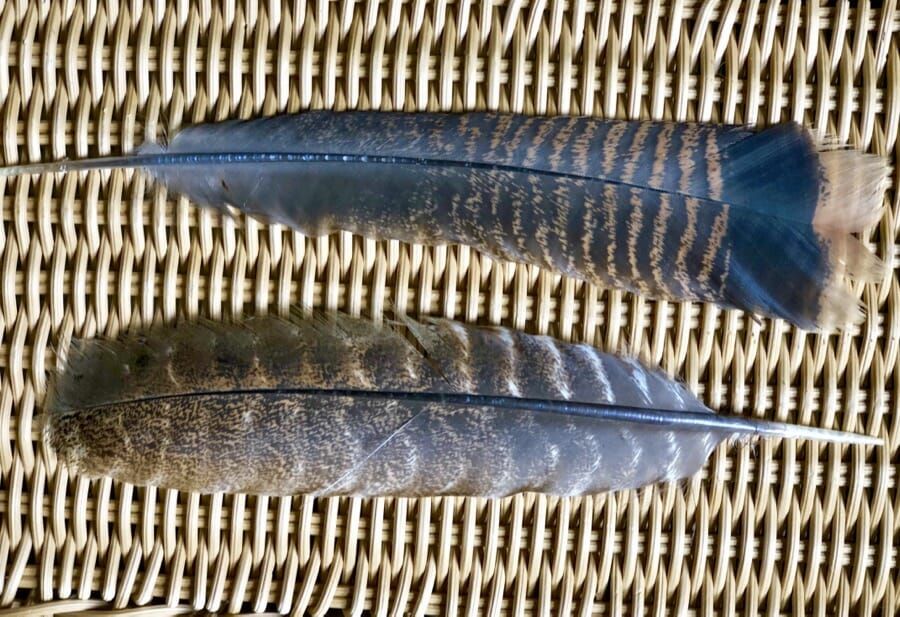 what tom left behind

WHAT TOM left behind (left to right, above): one tail feather and one wing feather from an adult male turkey. How do I know where these feathers fitted onto their former owner’s plumage, and that the bird who lost them was a male and an adult? The United States Fish & Wildlife Service Feather Atlas is a cool tool for such IDs. Visit it, and be prepared to get lost in geeky exploration.

One tech note: The search box up top left at the Feather Atlas sometimes doesn’t work for me, so I often start here, on the search page—reachable from the “search scans” navigation button up top, and then just type in a common name like “turkey” or “robin” or even “warbler.” Or I use the “browse scans” button up in the navigation to just have a look around by family of birds (which has the side benefit of teaching me a little avian taxonomy).

If you have no idea whose feather you saw, there is a tool for narrowing your selection by pattern and color and such characteristics.

An important addendum: It is illegal to collect feathers, even from dead birds—a violation of federal law to pick them up and take them home from where you find them. Have a look, take a photo, and leave them be.

A YOUNG frog girl perches on lip of a water-filled trough outside my kitchen door (photo, top of page). I say “girl” because of the size of her typanum, the flat membrane behind her eye that is an external hearing mechanism. A frogboy’s tympanum is bigger than his eye; frog girl’s is equal to or smaller than her eye.

Another tipoff if one is inclined to try to sex a frog is the white throat; boys in the green frog species (Rana clamitans, or Lithobates clamitans), and also in bullfrogs where I live (R. catesbiana or L. catesbeianus) take on yellow throat coloration, especially vivid in mating season. Ribbiting, huh?

These are just tiny bits of marvel that can reveal themselves if we indulge our curiosity outdoors—if we take a few extra minutes to really observe, and ask what is going on and who that is and why, oh why?

I’M HOSTING a workshop on how to up the ante of “wildness” in your garden–more beneficials like pollinators and birds and frogs–on September 15, 2018, in Copake Falls, NY, with an ecologist and field botanist friend to guide us. Interested? More about it on this other page.

just a few good places to look stuff up

FIREFLIES, GLOW-WORMS AND LIGHTNING BUGS, by Lynn Frierson Faust (Eastern and Central U.S. and Canada), is both charmingly written and technically expert, awakening us to their diversity.
SWIFT GUIDE TO BUTTERFLIES: By Dr. Jeffrey Glassberg, president of the North American Butterfly Association. A fully revised photo-driven butterfly ID tool. Even an easy photo-driven index.
THE NATURALIST'S NOTEBOOK by Nathaniel Wheelwright and Bernd Heinrich is a guide to being a better observer of nature in every season, with a 5-year blank calendar-journal at the back to call your own.
GARDEN INSECTS of North America (Princeton): Whitney Cranshaw and David Shetlar's comprehensive, easy-to-use reference is a gardener's must-have tool; now fully revised (Dec. 2017).
SPIDERS AND THEIR KIN is a tiny treasure, a little book that will get you understanding and appreciating these incredibly important creatures, and even beginning to ID the major groups. Best $7ish ever spent.
PETERSON REFERENCE GUIDE TO SPARROWS OF NORTH AMERICA, by Rick Wright, helps you get to know "your" sparrows (and juncos and towhees).
PETERSON GUIDE TO WOODPECKERS: Learn from a longtime conservationist and woodpecker expert why most species are mainly black and white, and how they evolved to withstand all that hammering and much more, plus in-depth species profiles.
COMMON SPIDERS OF NORTH AMERICA: Want to get really serious about spiders? This is the book, richly illustrated and packed with learning: ID hints, native ranges, even behavioral insights into different species.
BETTER BIRDING: Not a field guide, but a science-heavy guide to how pros observe birds using contextual cues, from senior staffers of eBird.org and American Birding Association. Includes raptors; sea, water and shorebirds; birds of the woodland edge; etc. Science-heavy.
COMMON LICHENS is an intimate look at these not-plants, not-animals that are essential to Earth's health.
MAMMALS OF NORTH AMERICA: Who knew I lived alongside 52 species of mammals of America's 462 total?
TRACKS AND SIGN OF INSECTS by Charley Eiseman demystifies all the lumps and bumps and squiggles and webs you see outdoors and ask, "What's that?"
KAUFMAN FIELD GUIDE TO BUTTERFLIES of North America: Probably the only butterfly book you'll ever need, plus easy to use.
KAUFMAN GUIDE TO INSECTS, a perfect overall guide to representative insects of every major group, with biology and life histories.
WEEDS OF NORTH AMERICA (Chicago University Press): the continent's 500 most troublesome plants, identifiable in all their life stages, seed to maturity.
DRAGONFLIES AND DAMSELFLIES of the West (Princeton University Press), Dennis Paulson's ode to Western odonates.
TREES OF WESTERN NORTH AMERICA, from Princeton: 630 native and naturalized species, ID'd and profiled.
TREES OF EASTERN NORTH AMERICA, from Princeton, with 825 native and naturalized species ID'd and profiled.
THE SIBLEY FIELD GUIDE TO BIRDS of Eastern North America is my daily go-to for confirming who's who out there. By David Sibley.
THE SIBLEY GUIDE TO BIRDS, the current master work of North American birds, written and illustrated by David Sibley.
DRAGONFLIES AND DAMSELFLIES of the East (Princeton Field Guides) by Dennis Paulson, an ode to the Eastern odonates.
PETERSON FIELD GUIDE TO MOTHS of Northeastern North America is an eye-opener for anyone who thought only butterflies were interesting.
HAWKS IN FLIGHT by Pete Dunne and colleagues, a look into the world of raptors--their ID, and life histories.
BARK: A FIELD GUIDE to Trees of the Northeast, by Michael Wojtech, teaches ID by bark, and also what bark does and how it evolved.
Categoriesbird sh-t insects & worms
Radio Podcasts
a way to garden podcast
Margaret's weekly public-radio show, from Robin Hood Radio in Sharon, CT, the smallest NPR station in the nation. Listen live at 8:30 AM EDT Mondays, to the replay Saturday morning, or stream the podcast anytime. LISTEN OR SUBSCRIBE FREE: Get the iTunes version; find it on the Stitcher app; or on Spotify, or your favorite podcast app. Browse past interviews below.
Podcast Archive

GO AHEAD: THANK A SPIDER today for all their hard work that helps make life on earth possible. Spider expert Rod Crawford of the Burke..
Read More
t
July 7, 2015
19 Comments

the goldfinch and the spider web

WHAT’S THAT BIRD DOING? This time it was a female goldfinch who elicited the question. She seemed to be pecking at the windowsill (above), but..
Read More
u
September 5, 2015
3 Comments

YOU’VE SEEN IT: Ducks stretching up in the water and flapping their wings, or rhythmically bobbing their heads. Red-winged blackbird males flashing their scarlet and..
Read More