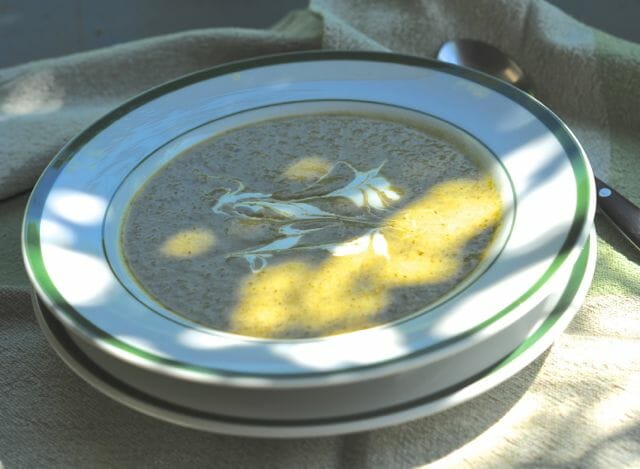 IN CASE YOU’RE WONDERING what plants are hailproof, the list is short—especially in the tender springtime vegetable garden, where peas and lettuce, spinach and such don’t take well to a thrashing. On Friday, May 24, 2013, we rescued what could be salvaged from the recent storm’s mess, and made sorrel-spinach soup from some of it. Once it was all pureed, you’d never know there had been giant holes in the leaves.

If you haven’t grown sorrel, Rumex acetosa, it’s easy from seed but perennializes even in my cold-winter garden (apparently even in Zone 3). It’s one of the first things to be up and growing, so I could have made sorrel soup weeks and weeks ago—or used the young, more tender leaves in salad, where they add a tart, not-quite-lemony flavor. A pretty, red-veined sorrel is especially nice in salads; it’s a close cousin, Rumex sanguineus. Neither species is tasty when the leaves get big and tough, so keep picking. (That’s it emerging in early spring in my raised-bed garden.) 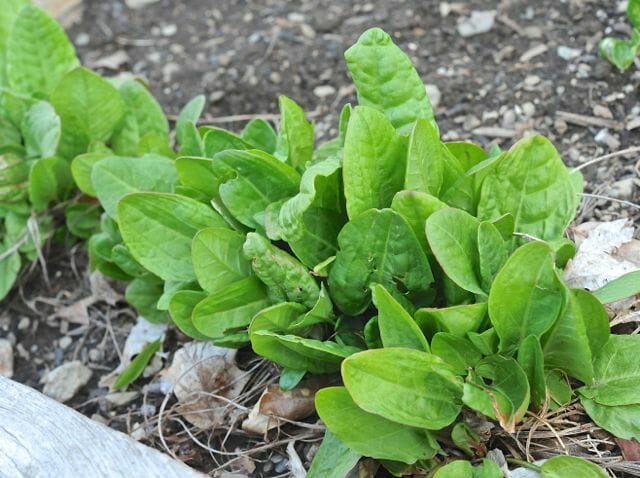 Sorrel is related to knotweed (meaning it’s in the Polygonaceae, or buckwheat family, as you can tell when it sends up its flower stalk around now). The Royal Botanic Gardens website says on that it’s native to the British Isles, and was once used to treat scurvy.

THIS SOUP is very green-tasting and tangy; delicious hot or cold, and thicker or thinner according to your preference.

The balance of spinach-to-sorrel can be adjusted as far as even to all-sorrel (or all-spinach for that matter), but the flavor will be much tarter as the sorrel is increased.

Note: Because I planned to freeze half the soup in portioned jars—to conserve freezer space—we began by making a thick puree; hence the very small volume of added liquid while cooking in the recipe below.  If you plan to use the soup at once, start by doubling both the water and vegetable broth, and then dilute further until you reach the desired consistency, allowing for the addition of yogurt when heating at serving time.

SORREL is the traditional ingredient in a cold soup called schav that I recall friends’ mothers making when I was a kid. Like this (from Arthur Schwartz, the Food Maven).

Categoriesedible plants entrees from seed herbs recipes & cooking soups vegetables
Radio Podcasts
a way to garden podcast
Margaret's weekly public-radio show, from Robin Hood Radio in Sharon, CT, the smallest NPR station in the nation. Listen live at 8:30 AM EDT Mondays, to the replay Saturday morning, or stream the podcast anytime. LISTEN OR SUBSCRIBE FREE: Get the iTunes version; find it on the Stitcher app; or on Spotify, or your favorite podcast app. Browse past interviews below.
Podcast Archive

playing favorites: some ‘must’ vegetable seeds

IHAVE BEEN AT THIS GARDENING THING LONG ENOUGH to know what I like, I told my indecisive self the other day as I sat, overwhelmed,..
Read More
u
June 26, 2013
15 Comments

I’VE BEEN EXPERIMENTING with a wider palette of brassicas—those good-for-you plants in the mustard family, a.k.a. cruciferous vegetables, or cole crops. (Why are there always..
Read More
h
April 2, 2008
7 Comments

EVEN IN A cold climate, there can be salad nearly year-round, assuming you have a coldframe of some sort and also purchase a range of..
Read More