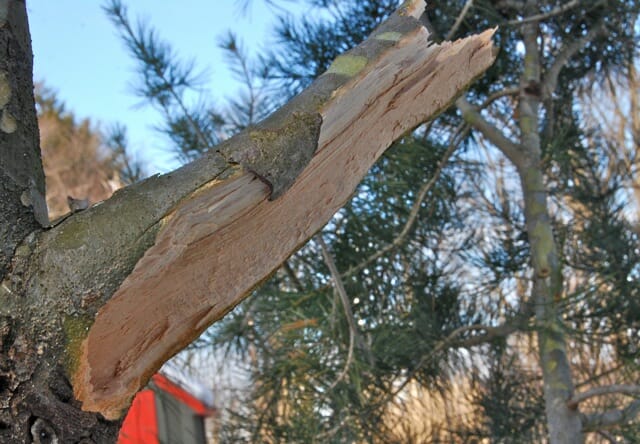 I OPENED MY MOUTH TOO SOON TWO WEEKS AGO when I said it had been an unremarkable winter here. Late February’s wet snows promptly pounded the Northeast region, and the garden. During the storm and since, I did a little triage—emphasis on little, since in many cases storm-damaged trees and shrubs need time to rebound first as the snow recedes. I focused on minimizing further damage, and left it at that, for now. Here’s the drill:

As I told reader Lynn the other day, when she commented about her own snow-damaged landscape, I start working while it’s snowing. During the storm at several junctures, I gently knock heavy loads off some vulnerable evergreens, especially, to prevent buildup. I always use a broom where I can reach, and make my movements in upward strokes (not pulling downward, which further adds to the weight and can split the wood, especially in brittle pines, for instance).

I never mess with ice-encrusted branches; too vulnerable. 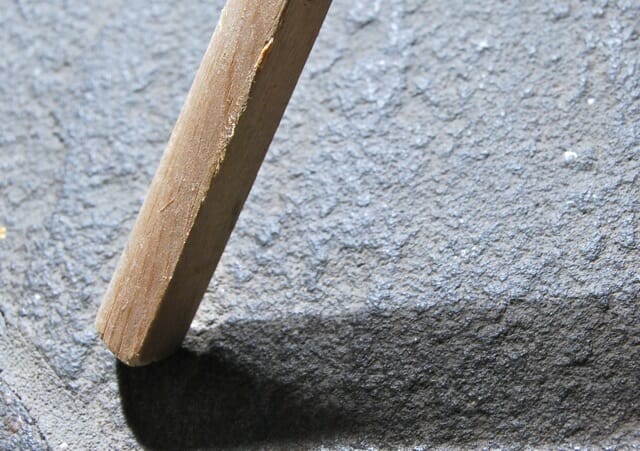 On taller specimens, I use a 10-foot piece of quarter-round molding (above) from the lumber store—my secret weapon, left over from a home improvement a decade ago. It’s about an inch thick, and the trick is it’s sturdy yet flexible, so I can weave it up into the higher branches and sort of wiggle it around slowly (in a small lasso motion) without inflicting damage that a heavier pole might.

Once the snow stops, I work at once to prevent further problems by making clean pruning cuts to remove anything that’s half-hanging or damaged and dangling. Particularly if these injured parts are weighing down a bigger branch or might peel off more bark by whipping in the wind, I drop them to the ground with a saw or lopper.

On a kousa dogwood by the front walk, for instance, two substantial side shoots off major branches were partly severed, so I reduced the load to try to save the main branches they emanated from. 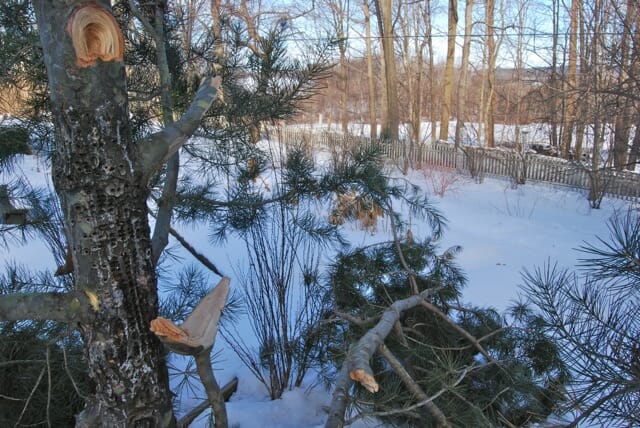 I only had 12 inches of snow, but its weight destroyed numerous trees and shrubs. The accident-prone lacebark pine I’ve written about before, the one I was wondering out loud about, is no longer in the “wondering about” column. Five or six more branches of poor Pinus bungeana are now gone (top photo and just above), and what I have is a 15-foot-tall lollypop with gouges in the naked trunk. Come spring, I will just have a memory. 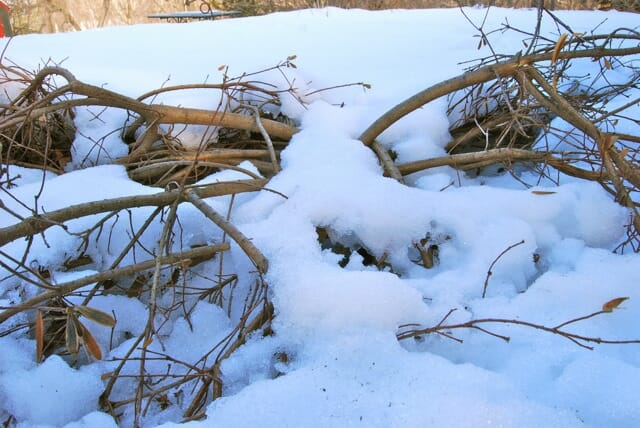 Three Daphne x burkwoodii ‘Carol Mackie,’ including a big old one in a prominent spot, are now D. prostrata instead (if you get my botanical Latin joke), flattened into octopus shapes on the ground. Goners (see before and after photos, below and above).

I did not try to dig out buried woodies like this, as I could have done more damage (they were completely hidden beneath the snow). I just waited to see as things melt whether the branches were cracked, and they are. Farewell. 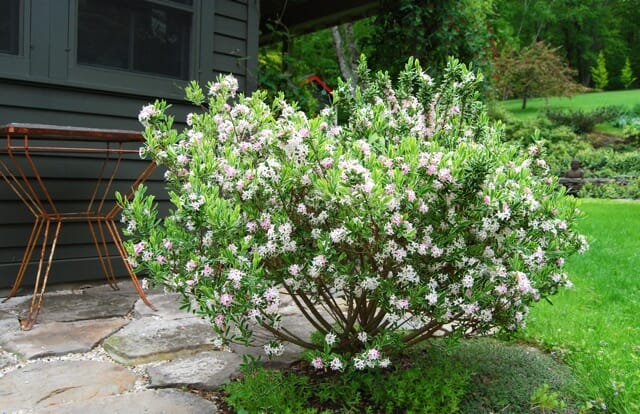 Now, as the snow continues to recede and light and warmth gradually increase, various things are gradually righting themselves—especially the conifers. Letting them take their time is  preferable to forcibly repositioning anything.

Others won’t bounce back, and in another couple of weeks, I may start offering some tangible support in the form of stakes, and maybe even have to choose a new leader—training a likely shoot upward with twine and a bamboo cane—for survivors that are now without one.

First there will be lots of corrective pruning, including some things that will go right to the ground in hopes of rising again, rejuvenated. I just can’t tell which ones yet, or count the losses—and so I sit and wait a little while longer, trying to be patient. Isn’t that the virtue they say we gardeners had better have a bushel of?

Categoriesconifers deciduous pruning trees & shrubs
Radio Podcasts
a way to garden podcast
Margaret's weekly public-radio show, from Robin Hood Radio in Sharon, CT, the smallest NPR station in the nation. Listen live at 8:30 AM EDT Mondays, to the replay Saturday morning, or stream the podcast anytime. LISTEN OR SUBSCRIBE FREE: Get the iTunes version; find it on the Stitcher app; or on Spotify, or your favorite podcast app. Browse past interviews below.
Podcast Archive

LOOKING OUT THE WINDOW, I feel silly posting the November chores—well, except for “shovel snow,” maybe, or “pick up branches if the snow melts” and..
Read More
m
October 29, 2012
4 Comments

YES, I KNOW. YOU RAKED THE LEAVES, but somebody moved them back onto the lawn and into the beds. Here, too.  That’s what we get..
Read More
f
February 4, 2009
No Comments

All based on my Zone 5B Berkshire MA/Hudson Valley NY location; adjust accordingly. NEW BEGINNINGS, ALMOST: The last bit of winter’s the hardest, to my..
Read More