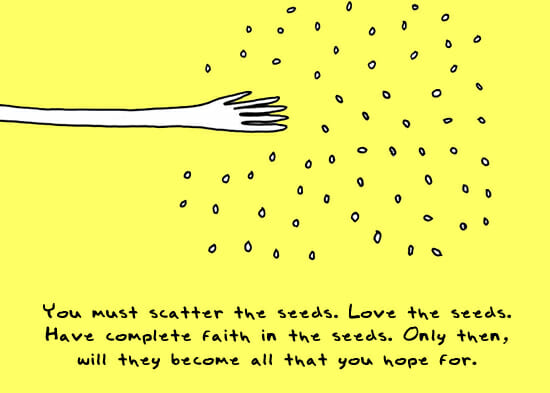 I CAN’T REMEMBER the proportions of salt, water and vinegar in my favorite pickle recipe, or any of the other formulas for things I do just once a year. Seed starting was like that—something I had to look up to refresh my memory—until I began linking the crops I sow indoors in earliest spring into three simple groups with similar needs, instead of trying to memorize the right timing for each and every one individually. You’ll need to memorize one fact to use my countdown formula for seed-starting, and that’s your local date of average final frost (mine isn’t until close to June). The illustration, by the way, is by our beloved Andre Jordan.
The brassicas, like broccoli, Brussels sprouts, cabbage, cauliflower and kohlrabi, all have the same requirements: about a month to six weeks indoors under lights before they go outside, which is safe about a month before final frost. This group therefore gets its start between March 15 and April 1 in my household. Tomatoes, peppers and eggplants make up my second group, each getting six to eight weeks under lights before transplanting, when all frost danger is past. Early to mid-April is my target sowing date, therefore—a friend nearby makes it even simpler, and says to sow your tomatoes at tax time, taking the sting away from that otherwise onerous date.

The last group is my favorite: the big-seeded sorts like pumpkins, squash, melons and cucumbers, which only need a couple of weeks indoors (or if you think you can outsmart the chipmunks, who usually take the seeds at my place, just direct sow around your frost date). Inside, I start these in mid-May or so.

Things I always direct sow include salad greens (lettuce, arugula and such); peas (as soon as the soil can be worked, about mid-March here); and spinach (either late fall for an extra-early crop, or very early spring); chard; broccoli raab; dill, and beans. I buy my onions as plants, since they take 10 or 12 weeks indoors, but you can sow indoors or direct-sow, too.

To make things easy, I fit any any annual flowers into one or the other indoor-sowing group, starting things like calendula with the early vegetables and real summer things like zinnias, marigolds and cosmos with the tomatoes. You can also direct-sow all these easy flowers. Basil and parsley, two other staples, fit into the system, parsley with the early stuff, basil with the later.

There will be experts who disagree with this gross lumping scheme of mine, saying eggplants actually need a week longer indoors than tomatoes and go outdoors a week later, for instance. They’re probably right, in the best of worlds. But since I’ve been lumping things this way the system is working much more smoothly, and since no two weather years are alike—particularly no two springs—I expect there’s a kind of built-in balancing act going on outdoors, anyhow. 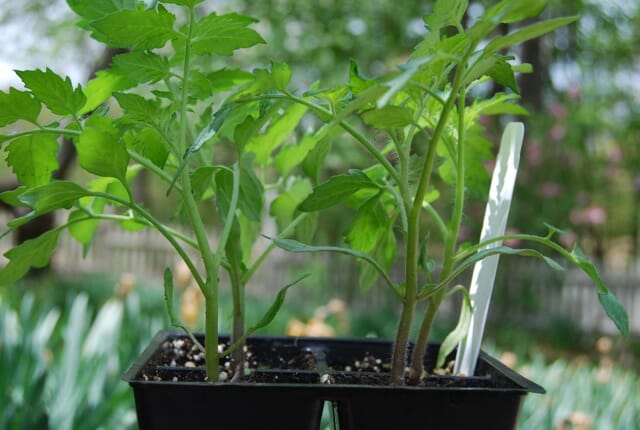 The key to growing healthy transplants is light. No, a windowsill just won’t do. Invest in a set of inexpensive shop lights at the home-building center, and fluorescent tubes to go in them. Special plant grow bulbs are a bit more expensive but evolving as is all light-bulb technology today. If you use the typical hardware store fare, get ones marked daylight, or one cool white and one warm white tube per hood to balance the light color. I have a homemade seed-starting rig with lights; the plan is here.

The relationship of the plants and lights must be a close one, meaning up close—never more than a few inches apart. This requires that either the lamp or the seedlings have to move as the plants grow. Suspend the lights on S-hooks and chains, or plan to prop up the flats at first with several boards, and remove one at a time to accommodate increase size of the youngsters.

An old bookshelf makes a great seed-starting set-up, if shop lights are fitted inside the underneath of each shelf. It’s about two-thirds cheaper to make one this way than buy a metal plant stand in the mail-order catalogs, and even a dark basement can become a growing space with this kind of setup. The shelves must be wide enough to fit the trays you are using.

Temperature also affects how seedlings germinate and grow, and not surprisingly the heat-loving plants like peppers, eggplants, tomatoes do best when the temperature’s warmer; the cool-season stuff does just fine a bit cooler. Plan to have your lights on 14 hours a day (a household plug-in timer, under $10, helps eliminate remembering the schedule). 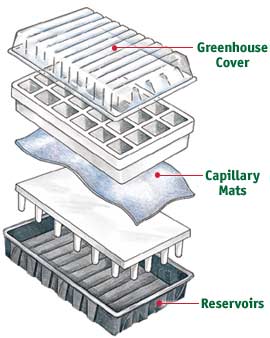 Though I used to think of seed-starting as a opportunity to recycle yogurt cups and other possible containers, now I’m hooked on an idiot-proof system called APS (Accelerated Propagation System, from Gardener’s Supply), because it waters itself. Their image is at left.

The reusable styrofoam system lasts for many years; it includes a well to hold water, which is set beneath the form made up of individual cells. There are trays of large cells for tomatoes, and others with many smaller cells (for the likes of lettuce) By using the right cell for the right plant from the moment you sow, you can eliminate the wasted time involved in potting up seedlings. A piece of thick fabric, called capillary matting, sits beneath the bottomless cells and one end hangs into the well of water below, sucking up moisture as the potting medium in the cells begins to dry out.

With this system and the timer, seed starting can even be accomplished by real people who are gone for an occasional weekend or don’t get home at the same time each day. It also allows weekend gardeners to start seeds at their out-of-town home, because all but the largest plants will have plenty of water to last from Sunday night to Friday. But there are also some other great systems.

Always use fresh, sterile medium. Purchase a mix marked for starting seeds, not just any potting medium. Often, these will be marked as a “soilless mix,” meaning they are made up of ingredients other than soil—things like milled sphagnum moss, peat, vermiculite, or perlite.

I usually sow a couple of seeds in each cell, because not everything germinates (though most, in fact, do if the seed is fresh and the conditions are right). If two emerge, wait until they get their first set of true leaves (not the first ones, called seed leaves, that all look basically the same, but the ones that start to have the character of the specific plant. Then use a small scissor to snip off the weaker of the two right at the base. Pulling it may dislodge the one you intend to keep.

The main thing: stick to the system of when to start what; don’t jump the gun no matter how tired of winter you’re feeling. Bigger tomato plants aren’t better; small, stout 4-inch seedlings or thereabouts are what you’re aiming for, wider than they are high, not ones that have been in their cells so long they’re actually trying to stretch up to the light, or flower in their cells. Patience is a virtue in this gardening game. Patience.

Categoriesannuals & perennials edible plants for beginners from seed seed starting
Tags
seed startingvines
Radio Podcasts
a way to garden podcast
Margaret's weekly public-radio show, from Robin Hood Radio in Sharon, CT, the smallest NPR station in the nation. Listen live at 8:30 AM EDT Mondays, to the replay Saturday morning, or stream the podcast anytime. LISTEN OR SUBSCRIBE FREE: Get the iTunes version; find it on the Stitcher app; or on Spotify, or your favorite podcast app. Browse past interviews below.
Podcast Archive

when to start what: vegetable-seed calculators

WONDER WHAT TO SOW WHEN to get homegrown transplants ready for the vegetable garden? I’ve gathered links to some foolproof online seed-starting calculators and charts,..
Read More
d
February 3, 2016
15 Comments

STARTING SEEDS is not hard…unless you skimp on light, or your timing is off. Sorry, friends, but your windowsills just won’t do, and over-eager “headstarts”..
Read More