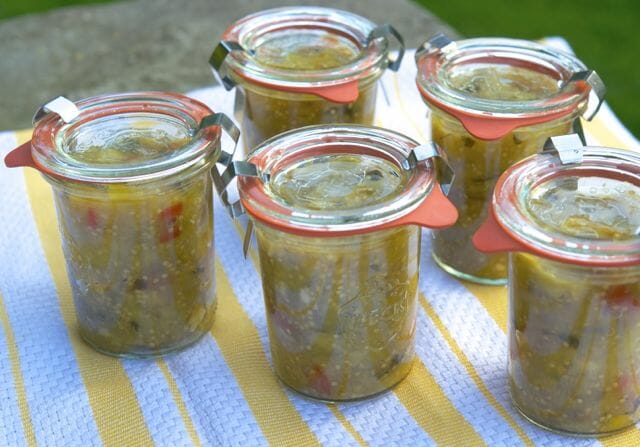 I VOICED A LONGING for tomatillos at seed-catalog shopping time last winter, having skipped growing them for years, and now…well, let’s just say I am lonesome no more. What to do with the many fruits, whose husks have filled out and then some, signaling ripeness-plus of the fruit inside? Seems that it depends who you ask—even if you specifically state it’s salsa that you have in mind.

Everyone usually agrees that tomatillos, garlic, onion, peppers and cilantro are the basic ingredients involved, but do you simmer your tomatillo salsa on the stovetop, or simply pulse-then-blend the raw ingredients together? Perhaps it’s best to roast it in the oven till the whole thing transforms from a thin-into-thickening slurry, and finally to something more like a loose and glistening jam?

On the word of my friend You Grow Girl, Gayla Trail, I went with the roasting-pan method.

Since I planned to freeze (rather than can) about a dozen small jars, I didn’t have to worry about a perfect balance of acidity, or what other ingredients I added. I simply went by eye, and taste. In my first batch, I was timid about the hot peppers; in my second, I went a little bolder. Both are tasty.

I imagined the sweetness that happens when you roast vegetables—set against the kick of the peppers and garlic. 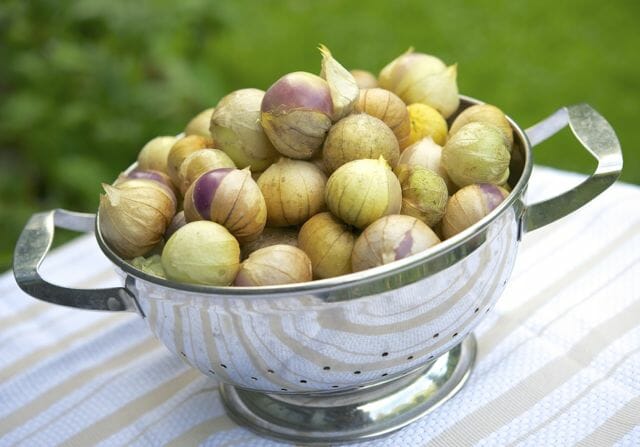 I used oil in the roasting pan, and lots of fresh cilantro. And I incorporated some of the sweeter, technically “over-ripe” tomatillos that had colored up to yellowish-green and purple, mixing them with tarter bright-green ones that are the familiar stuff of salsa verde.  (When I say “over-ripe,” I want to be clear: They are not mushy or in some way gone bad, but still firm and in fact delicious, with an odd, complex, fruity sweetness I don’t recognize from any other fruit or vegetable. I enjoyed quite a few of them whole and raw, as I might a berry or a cherry tomato. If you plan to make a more typical salsa verde, as in “green,” go with just-ripe fruit.)

I think I ended up with what I would label tomatillo jam—which is proving delicious on quesadillas and other grilled cheese, or on tamales (a favorite food here in my house), or over rice and beans. The thick, sweet-yet-punchy condiment–sort of pepper jelly meets chutney–would be good on chicken or fish as well. 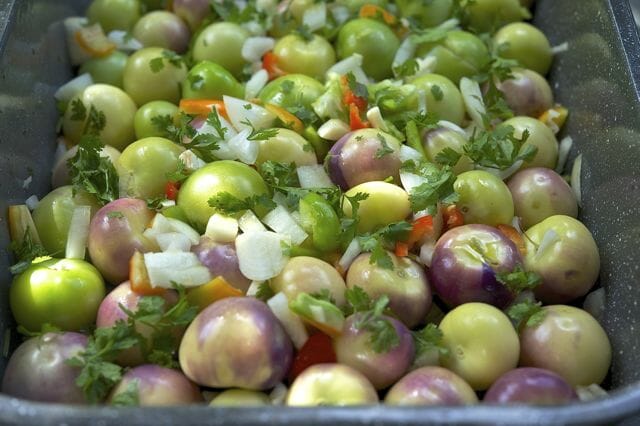 how to make the jam-like tomatillo concoction:

Note: All the recipes I found talk about starting with a pittance of tomatillos—clearly not geared to gardeners with a glut on their hands. So I improvised the amounts, but mostly featured the tomatillo in my blend. (Yours could be much heavier on the onion, for instance.) To a colander full of fruits I added a large chopped onion, 6 cloves of garlic, and two small hot peppers plus two medium-sized milder peppers (also all chopped). I used a half-bunch of cilantro leaves, chopped.

Remove the husks and small stems of the tomatillos, and rinse fruit (which will feel naturally sticky; no worry).

Chop your peppers (seeded first), and onions and garlic.

Put it all in a roasting pan; toss with a little olive oil.

Roast it uncovered until it bubbles and starts to soften; stir.

Stir again after about 10 minutes. And again—until desired thickness is achieved. Cool and put in small jars to freeze, or use within the week (refrigerating meantime). 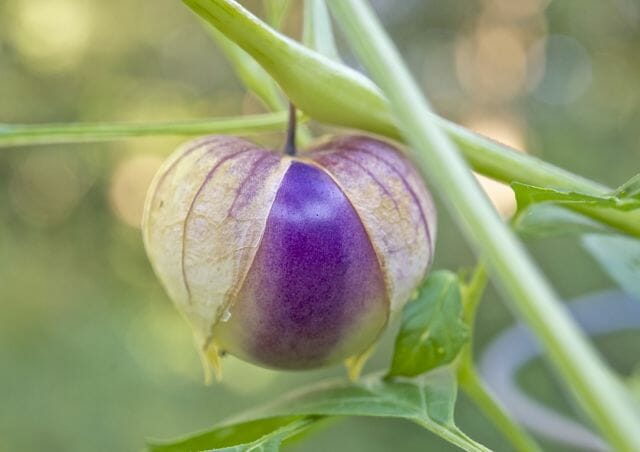 other ways to make tomatillo salsas, and more

Chef Rick Bayless would scold me for not roasting the ingredients so they blackened, like this, putting it all under the broiler 4 inches from the heat source, then turning to blacken the other side.

Extra tomatillos? Just as you might freeze whole tomatoes for later use, simply husk them and put in a freezer bag.

Or, add them to guacamole, says “The New York Times” (fewer calories than avocado-only), or make another version of salsa verde that incorporates avocado, like “Saveur” suggests in their Salsa Verde Con Acquacate.

Or do the easiest thing of all, and the most vitamin-packed, I suppose: no-cook blender salsa verde (again, from Rick Bayless).  You could freeze jars of that easily. Likewise with this similar but cooked version, from Food 52.

To learn about growing tomatillos, revisit my radio show and story with Gayla Trail from earlier in the year, on my blog or hers.

Categoriesedible plants Featured freezing & canning fruit pickles & condiments recipes & cooking vegetables
Radio Podcasts
a way to garden podcast
Margaret's weekly public-radio show, from Robin Hood Radio in Sharon, CT, the smallest NPR station in the nation. Listen live at 8:30 AM EDT Mondays, to the replay Saturday morning, or stream the podcast anytime. LISTEN OR SUBSCRIBE FREE: Get the iTunes version; find it on the Stitcher app; or on Spotify, or your favorite podcast app. Browse past interviews below.
Podcast Archive

ADD THEM TO THE LIST of plants I suddenly noticed are MIA—things I “always” grew but haven’t lately. The latest “where did they go?” crop:..
Read More
a
January 14, 2014
359 Comments

WE’VE BEEN SEED-SHOPPING our way around the nation in my recent series on the radio and blog—and now we’ll head around the world a bit,..
Read More
s
August 25, 2013
17 Comments

SEED LIBRARY CO-FOUNDER DOUG MULLER makes it sound easy, and gross in a fun way—you know, like when you’re 12 years old and “gross” is..
Read More