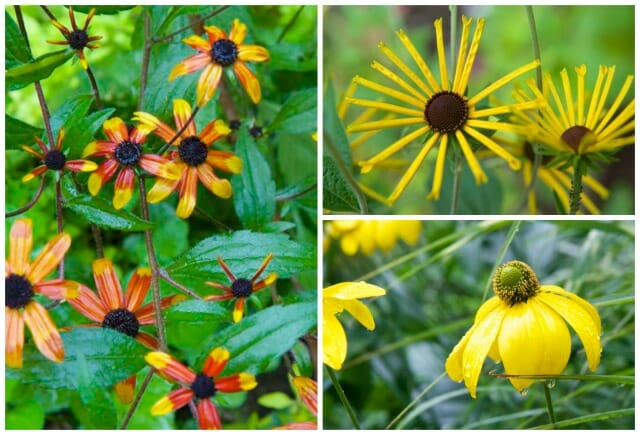 ONCE, MORE MONARCH BUTTERFLIES shared the joy of July-through-September Rudbeckia season with me. Now, sadly, those butterflies are fewer here, but the biggest, most giving Rudbeckia I grow, ‘Herbstsonne,’ keeps putting out its flowers like a beacon, just in case they show up in droves again. With it as inspiration, in recent years I tried two newer-to-me Rudbeckia: ‘Henry Eilers,’ and ‘Prairie Glow.’

Whether we call them black-eyed susans or coneflowers, there are a couple of dozen species of Rudbeckia, an American genus in the Compositae or Asteraceae or simply “daisy family” that has produced many popular garden perennials, biennials and even annuals.

I long ago stopped growing ‘Goldsturm,’ from the species R. fulgida, probably the most familiar Rudbeckia of all. Like many gardeners, I planted lots when ‘Goldsturm’ was first popularized (along with Sedum ‘Autumn Joy’ and purple coneflower, remember?) and guess I OD’d on it. A good plant, but here are three I like better: 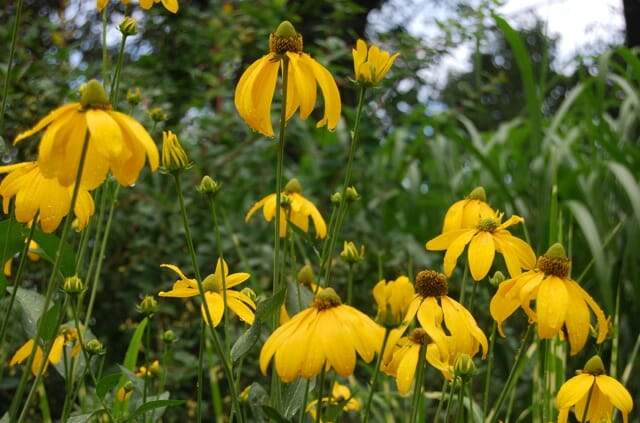 MY LONGEST Rudbeckia relationship has proven to be ‘Herbstsonne,’ whose name translates as autumn sun, and which earned a Royal Horticulture Society Award of Garden Merit in 2002. Whether it is Rudbeckia nitida or Rudbeckia laciniata or a hybrid of the two, I do not know; depends who you ask.

It has been with me more years than I can recall—certainly a decade-plus, and probably more like 15. What is now a big clump reliably erupts around July at the far side of the property, on a direct axis from where I work all day. Though I sit more than 100 feet away, there is no missing this 6-plus-footer with many weeks of vivid yellow flowers.

It has duked it out in a giant stand of even-taller ornamental grasses without even a hiccup, and truly: I have done almost nothing but sit here and admire ‘Herbstsonne.’ As with all Rudbeckia, birds will be happy if you fail to deadhead and seeds are set; butterflies appear to be happy with the whole genus from first bloom to last.

Give it sun, and maybe some support if your late summer’s especially windy or stormy (generally this one stands up on its own just fine), and expect to become old friends, too. 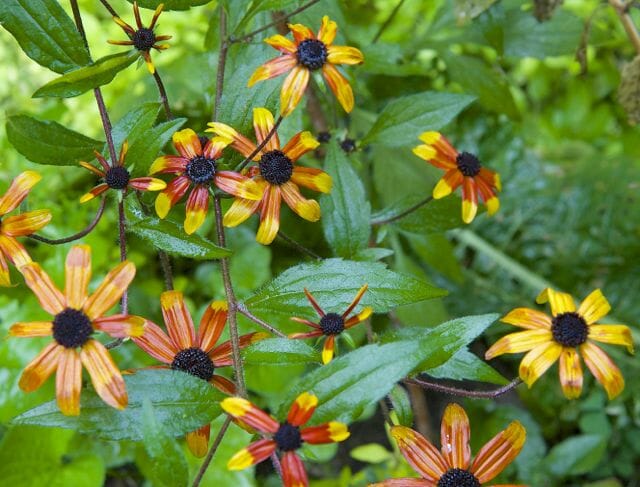 I DIDN’T KNOW when I planted it whether Rudbeckia triloba ‘Prairie Glow’ would be as durable as my beloved ‘Herbstsonne,’ since catalogs refer to it as a biennial to short-lived perennial, also saying it self-sows. No matter; it seemed to shape up fast to 3-4 feet high. A few young plants from Select Seeds made a good show in their first year (and seed is also available, along with various other Rudbeckia). I suspect that there may be variation in years to come if it does indeed self-sow—but even the basic yellow-flowered triloba is a handsome thing, if some appear among the offspring.

One year in, I had about half my plants survive, and a couple of seedlings, too; by year three I needed to add more young plants to keep the generations coming.

I planted my ‘Prairie Glow’ among the annual silver-leaf sunflowers (speaking of composite family members) that I like so much, where the smaller, much-branched Rudbeckia is sort of filling in the lower and mid-level, as if there are different tiers and scales of sunflower-like blooms in concert. Nice. 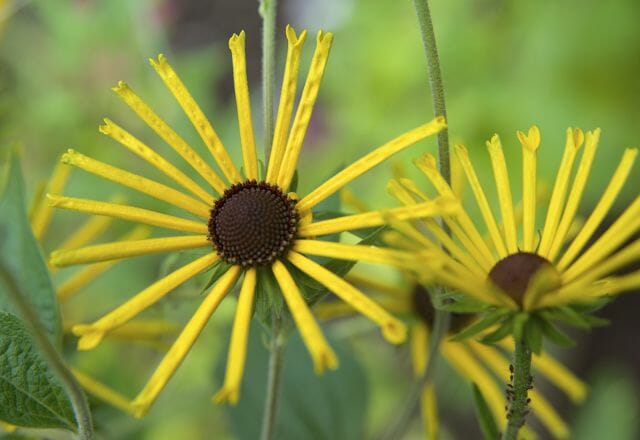 HOW DID I MISS ‘Henry Eilers,’ introduced to the nursery trade in 2003, until recently? Apparently this selection of the species R. subtomentosa was discovered alongside an Illinois railroad route by a nurseryman the plant was eventually named for. What caught his eye, and will catch yours: The yellow rays are not flat as usual, but rolled up, like quills. In just one season, starting from a small plant, this one was already nearly 4 feet tall, with up to 5 feet predicted.

‘Henry Eilers’ looked from the start as if it intended to be a strong performer, the way ‘Herbstsonne’ has proven; I saw a bold stand of it in a friend’s garden this summer. I have also read to expect self-sowns, which isn’t a bad thing, but I haven’t had any so far in a few years. (Is Henry too tall for you? There is a one-third-shorter ‘Little Henry,’ too.)

what about hardiness (and bunnies, and woodchucks)?

HOW HARDY are all these Rudbeckia?  Depends who you ask, so let’s use just one source for all. Missouri Botanical Garden says ‘Herbstsonne’ is Zone 5-9; triloba is Zone 4-8; and subtomentosa ‘Henry Eilers’ is Zones 4-8.

As for animal damage, the 2014 rabbits here were particularly pleased at the arrival of the two new Rudbeckia, savaging the foliage and stems of some of each variety down to nubbins. I have never in all these years seen them go for ‘Herbstsonne,’ whose cutleaf foliage is very different in shape and texture, but who knows whether this is just coincidence or some actual preference. Woodchucks, too, seem to love these (and their Compositae cousins the asters as well). Damn.

Categoriesannuals & perennials Featured insects & worms Nature
Radio Podcasts
a way to garden podcast
Margaret's weekly public-radio show, from Robin Hood Radio in Sharon, CT, the smallest NPR station in the nation. Listen live at 8:30 AM EDT Mondays, to the replay Saturday morning, or stream the podcast anytime. LISTEN OR SUBSCRIBE FREE: Get the iTunes version; find it on the Stitcher app; or on Spotify, or your favorite podcast app. Browse past interviews below.
Podcast Archive

WHILE ALL AROUND THEM ARE LOSING THEIR HEADS, the tallest perennials in the garden are just coming into their own.  No need for cutbacks; these..
Read More
t
August 5, 2018
14 Comments

top late perennials, + smart care tips for a garden to last through fall, with kathy tracey

I HAD TO TALK MYSELF off the ledge repeatedly through the last half of July and into early August. The trigger? A garden that looked..
Read More
g
February 22, 2015
588 Comments