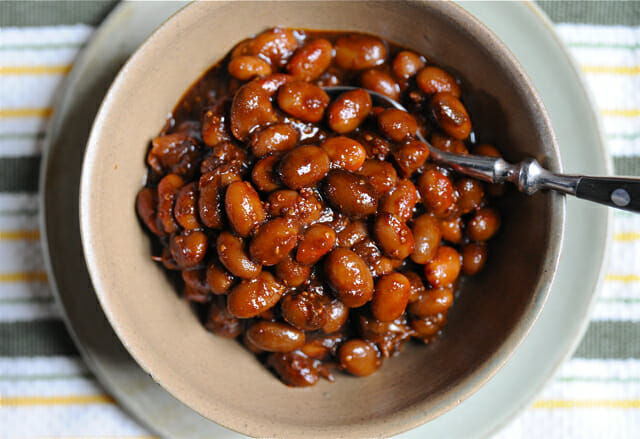 IMADE VEGETARIAN BAKED BEANS WITH MARTHA STEWART, my ex-boss, on her television show in 2011, one of the more out-of-body experiences of my relatively quiet current life. After that, a lot of you wrote in to ask for the recipe, and the source of the heirloom beans I use. Your wish was my command…although it had to wait till I made another batch so I could take some photos before answering, sorry.

The way I cook is all about big potsful of things, and freezing or canning for later: cook once, eat multiple times. For the price of 1 pound of dry beans and a few simple ingredients, the yield is enough for six or eight portions, most of which are frozen in small containers for later use.

This easy recipe takes very little active prep, but lots of waiting on each end for soaking and then baking. We gardeners are patient types, no? 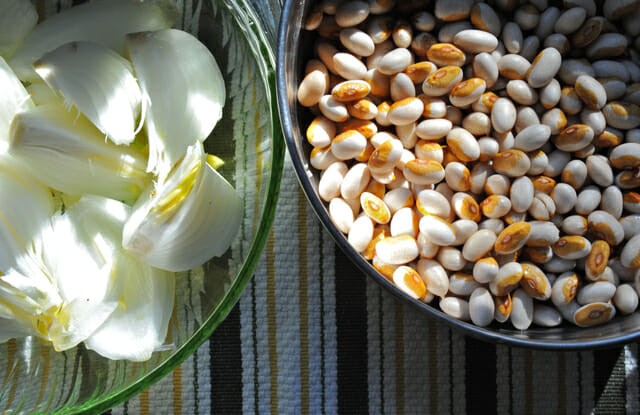 Steps:
Soak the beans overnight; discard the water. Add fresh water and simmer beans briefly (maybe 30 minutes) to just barely tender while preheating oven to 350ish. The “right” temperature really varies with the size of pot you are using; you want the beans to bubble in the oven.

Put water on to boil.

Coat an oven-proof covered pot, such as a Dutch oven or large Pyrex casserole or ceramic bean pot, with a splash of olive oil. Lay the quartered onions in the bottom. (Note on selecting a pot: There must be enough headroom to put in all ingredients above, plus at least 1 inch of boiling water, plus clearance to prevent overflows.)

Drain beans; dress them with the other ingredients above (sweeteners and mustard and tomatoes). Pour over the onions.

Pour boiling water over the mixture until it’s an inch or so above the solids.

Cover and bake until done, between two hours and forever.  Many recipes say to leave baked beans uncovered while cooking; doing so, with certain large beans, I have had it take six hours or more. I cover the casserole, and periodically check to see if water is receding. If so, I taste a bean; if not nearly ready, I add more boiling water, often a couple of times.

Once the beans reach an almost-ready tenderness, uncover and turn up heat to 375F the last hour (give or take) to reduce the liquid to a thick, dark brown syrup, turning the ingredients a couple of times to mix everything up.

If the flavor isn’t sweet enough, or tomato-ey enough, or wants salt, add it during this last phase.  Or balance the maple-to-molasses ratio to suit your taste. This is a flexible process, not delicate chemistry. You can even make the beans soupier, with more sauce than I like, by not cooking down so long.

Again: The freshness of the beans you start with, how well you soak/cook them first, and the vessel you cook in really make the timing and temperature combination vary.  Experiment. 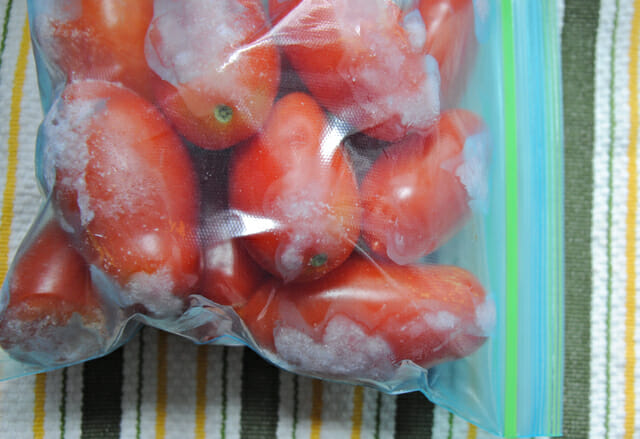 what beans to use

want to grow your own?

GROW A variety of bean adapted to shelling, and let the pods dry on the plant. If rain is forecast late in the growing cycle, pull whole plants, roots and all, and dry them indoors, such as hanging on a line in the garage.

Categoriesentrees Featured recipes & cooking side dishes vegetables
Tags
dry bean recipes
Radio Podcasts
a way to garden podcast
Margaret's weekly public-radio show, from Robin Hood Radio in Sharon, CT, the smallest NPR station in the nation. Listen live at 8:30 AM EDT Mondays, to the replay Saturday morning, or stream the podcast anytime. LISTEN OR SUBSCRIBE FREE: Get the iTunes version; find it on the Stitcher app; or on Spotify, or your favorite podcast app. Browse past interviews below.
Podcast Archive

STEVE SANDO and I agree that the saying “a hill of beans”–as in, something is of little or no importance at all–gives a very mistaken..
Read More
g
April 9, 2016
172 Comments

DRY BEANS have been a mainstay of my diet for decades; the pantry’s always stocked with multiple kinds. But as possibilities beyond the basic Navy,..
Read More
s
April 3, 2014
24 Comments

INTERVIEWING COOKBOOK AUTHORS can be hazardous work, causing unexpected detours to the grocery store in search of something you just suddenly must have–and then into..
Read More