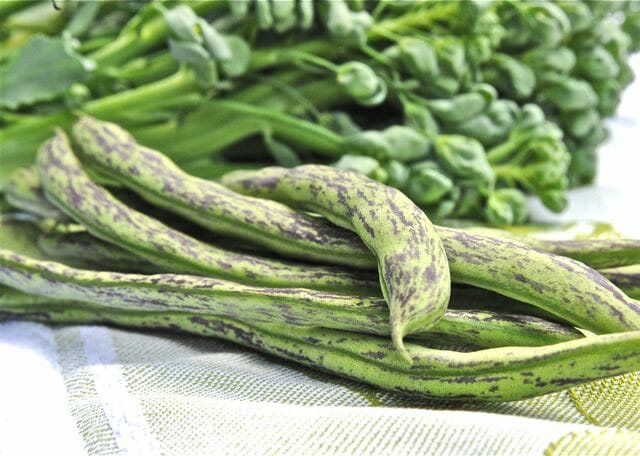 IT CAUGHT MY EYE in the catalogs, since I garden in rattlesnake country. (Yes, as you would know if you had read my last book: Dear Crotalus horridus is my neighbor here, and moved in long before I did. He’s recently gone from endangered to merely threatened in New York State, meaning he apparently plans to stick around.) So during my winter seed-shopping (when the snakes are hibernating) I came upon an heirloom called ‘Rattlesnake’ pole bean, and I thought: I must grow those.

Now, I can tell you from first-hand experience that the purple markings on the rounded, 6- or 7-inch green pods look nothing like those on an Eastern timber rattler. But when grown until the pods mature and dry (here’s how to grow and dry shell beans), they’d be more in the snake’s tan and brown color range, if not the right pattern, exactly. The bean seeds are somewhat pinto-like, but much smaller, and speckled the way the green pods are before they turn solid green when cooked. 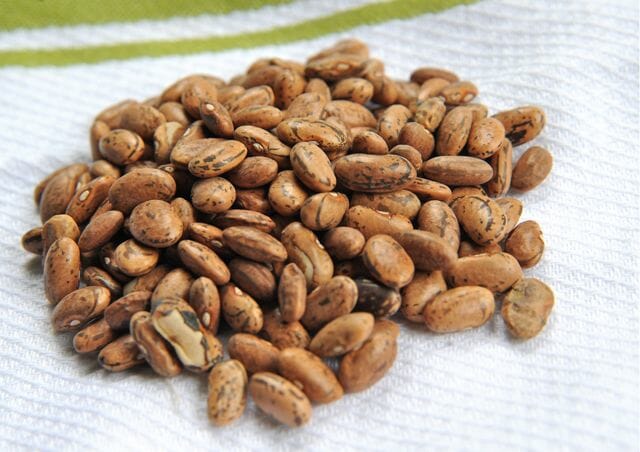 Besides being beautiful, the fresh snap beans are somewhat sweet-tasting and easy to grow, and especially cooperative in hot weather (making them a favorite in the Southeast and mid-Atlantic, says Southern Exposure Seed Exchange, which lists them as 73 days to producing size).  Up north in Maine, Fedco’s catalog says 70 days–and that down south they’re sometimes called Preacher Beans, which Seed Savers confirms (offering a range of harvest time from 60-90 days); High Mowing Seeds says they’ll start sizing up at about 65 days. 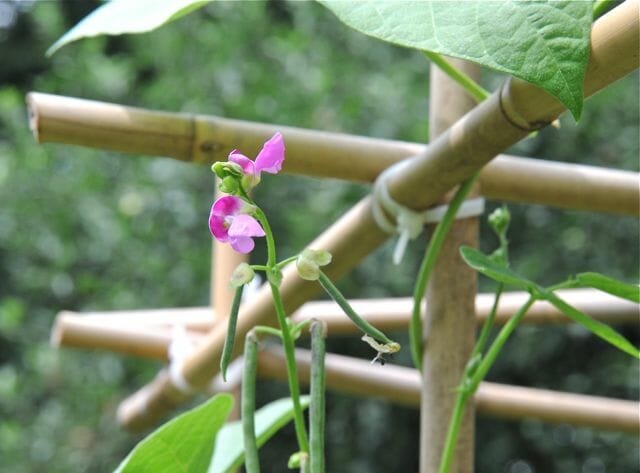 Grow ‘Rattlesnake’ like all beans in sun, and provide support for vining types like this one, which grows vigorously to about 10 feet, producing purple flowers before the pods.

Maybe I’ll try the dried beans in a pot of minestrone soup, or my homemade vegetarian baked beans if I get enough of a harvest this fall–lots of possibilities to consider. One never knows what to expect next from a rattlesnake, right?

Categoriesfrom seed vegetables
Radio Podcasts
a way to garden podcast
Margaret's weekly public-radio show, from Robin Hood Radio in Sharon, CT, the smallest NPR station in the nation. Listen live at 8:30 AM EDT Mondays, to the replay Saturday morning, or stream the podcast anytime. LISTEN OR SUBSCRIBE FREE: Get the iTunes version; find it on the Stitcher app; or on Spotify, or your favorite podcast app. Browse past interviews below.
Podcast Archive

‘DON’T BE WORRIED WHEN THE SEEDS show in the pods,” the folks at Turtle Tree Seed had told me about ‘Aunt Ada’s Italian’ pole bean;..
Read More
g
April 9, 2016
172 Comments

DRY BEANS have been a mainstay of my diet for decades; the pantry’s always stocked with multiple kinds. But as possibilities beyond the basic Navy,..
Read More
h
July 18, 2015
307 Comments

STEVE SANDO and I agree that the saying “a hill of beans”–as in, something is of little or no importance at all–gives a very mistaken..
Read More