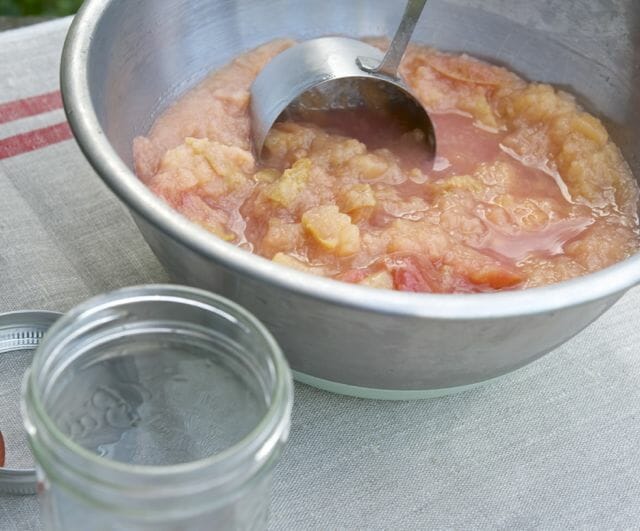 MY FAMILY CALLS IT ‘PO SAUCE, with the “po” representing the last syllable of the word “apple,” the way my beloved niece pronounced it when she was small. One fall weekend, as I hurtled by to give a lecture out their way, I met my brother-in-law at Exit 9 off I-90 to deliver the first load of Pink ‘Po Sauce that started life on my century-old trees. Sigh of relief: 11 quarts and 5 pints moved from my freezer to theirs.

Another day that year, my friend Katrina filled the back of her car with my apples, heading home to cook them up, and many neighbors have been the recipients of boxes of apples, apples and more apples, too. It’s applesauce time, and here’s how that goes: 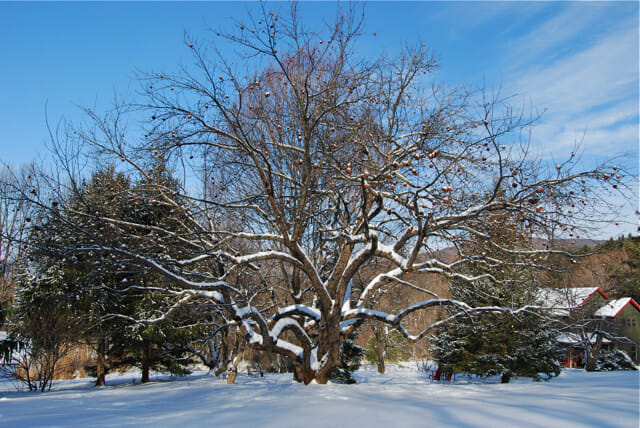 Bountiful rains put regional 2013 apple crops—including fruit on my handful of ancient trees that I do not spray (that’s a 40-foot-wide one out back, above)—at bumper levels. The 2015 season didn’t feature much rain, but the apples were crazy-plentiful, after a 2014 when I had almost none. In 2016, almost a total bust, after a non-winter and a very dry whole year. Neighbors with old trees had none, either; I bought several bushels in for the first time ever. And so it went: bumper 2017; smallish 2018 crop, so-so in 2019…

My 125-plus-year -old standard-sized trees are too tall to pick from, so I simply cull the windfalls, dumping any runts or chewed-on ones into the woods for deer and other animals, and taking wheelbarrow loads of good ones over to the kitchen door.

Katrina adds raspberries to her sauce for a beautiful, vivid color and flavor, like this (her recipe for “Time in a Bottle,” as she calls it). Those lucky apples of mine who got to go home with her, huh? 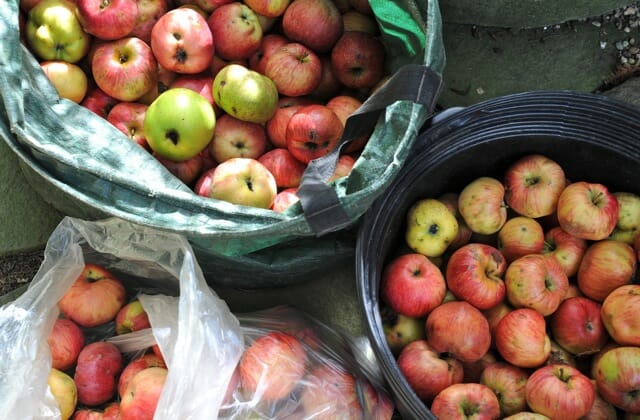 Yes, I know: You can quarter the apples, then use a paring knife to core each quarter.  But I have enough apples for four armies, so I use one knife only, the chef’s size, and simply make four cuts, leaving the core intact to discard (as below). 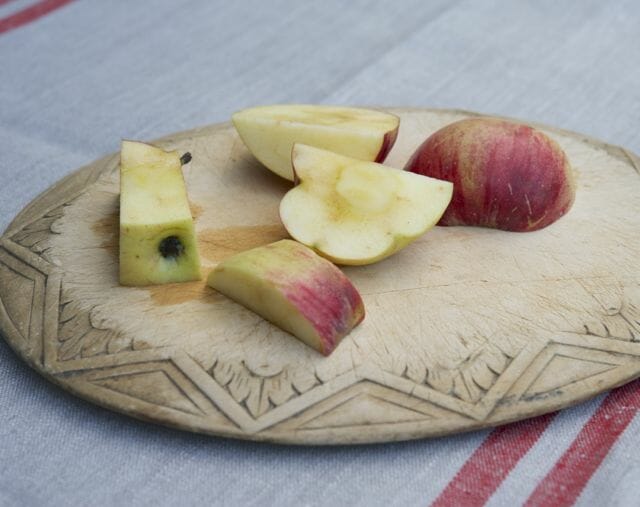 You could peel them, too, but then you won’t get pink sauce (and besides, fiber is a good thing, no?).

You could get rid of the peels after cooking, with a food mill or sieve. But again, why?

You can add sugar, brown sugar, honey, spices such as cinnamon and nutmeg, or even those raspberries the way Katrina does, remember?  Me? I keep it simple. Depending what I use the sauce with later on, I might dress it up accordingly, but usually just apples and a little water works for me.

running out of freezer space?

RUNNING OUT of freezer space?  Canning applesauce in a boiling-water bath is fine (presuming you have the right gear and follow the rules!).

The classic “Stocking Up” canning guide from Rodale recommends 4 pounds of apples; a cup of water; a half-cup of honey; optional cloves, nutmeg or cinnamon. Also optional (to “brighten” the flavor of too-sweet apples if desired) is a quarter-cup of fresh lemon juice. Ladle cooked hot sauce into scalded pint jars and process for 20 minutes, they say. Another option in that recipe: to leave the skins in or food-mill them out.

The National Center for Home Food Preservation peels their fruit (for a more standard product like store-bought, my expert friend Theresa Loe says, not because of food-safety worries) and processes 15 minutes for pints and 20 minutes for quarts, like this.

Or just meet your brother-in-law at the side of the highway with 11 quarts or so (that delivery, below, in recycled goat yogurt containers). That will free up some room, admittedly while overstocking his. 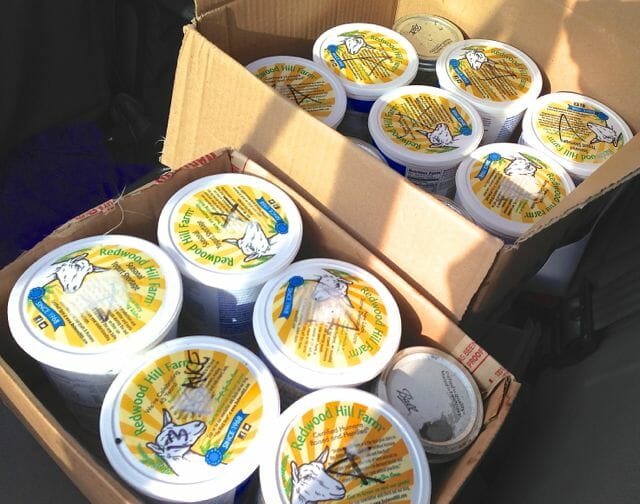 Categoriesdesserts edible plants Featured freezing & canning fruit recipes & cooking side dishes
Radio Podcasts
a way to garden podcast
Margaret's weekly public-radio show, from Robin Hood Radio in Sharon, CT, the smallest NPR station in the nation. Listen live at 8:30 AM EDT Mondays, to the replay Saturday morning, or stream the podcast anytime. LISTEN OR SUBSCRIBE FREE: Get the iTunes version; find it on the Stitcher app; or on Spotify, or your favorite podcast app. Browse past interviews below.
Podcast Archive

apple season: a windfall of recipes from my friends

YOU SAY APPLE, AND I SAY TOMATO. Welcome to Food Fest Week 9, where the subject is apples…real ones over at the Dinner Tonight blog,..
Read More
&
October 26, 2015
277 Comments

SOUTHERN CALIFORNIA-based but Southeast-bred Kevin West strikes me at once as a very modern and also a very old-fashioned guy–a great combination to my mind...
Read More