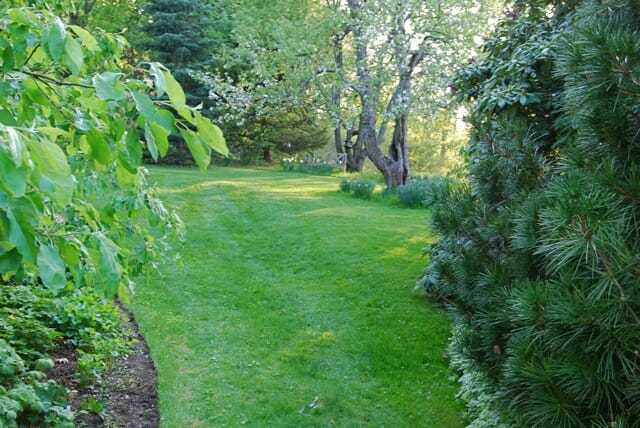 OKAY, I WILL ADMIT TO A BIT OF A COMPULSION about edging. It is my contention that even a mediocre garden can look pretty swell with a clean edge on it (or at least you’ll impress people with your mastery of edging in and of itself). With many, many hundreds of linear feet of garden edges to cut between turf and border each year, I ought to know. Want to see how? 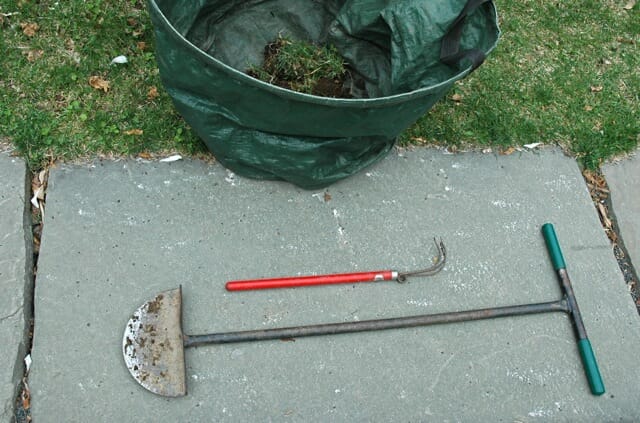 The gear is simple: A step-on half-moon edger (the thing I also use for dandelion digging); a short-handled claw or cultivator of some type for peeling back the parts I want to remove, roots and all; and a tip bag or wheelbarrow for collecting and hauling away the debris. Sometimes I eyeball things to plot my course; other times I warm up some lengths of garden hose in the sun first, to make them really flexible, and place them where I think the edge should be, stepping back and adjusting a few times before I use the hose as a guideline for my cuts. In spots like along the stone walkway (above), I just cut right up against the stones, where the turf was overgrowing, no other guidelines needed. 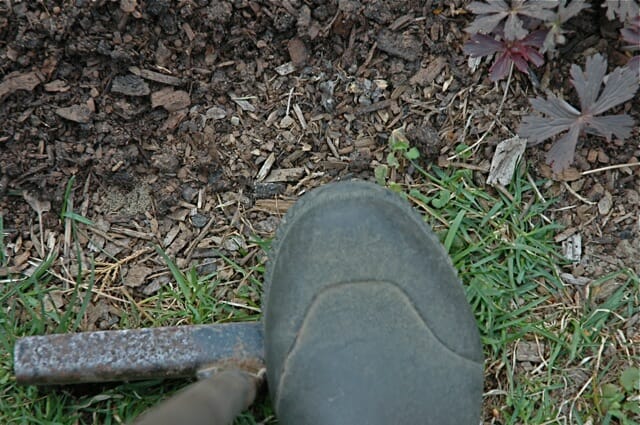 I simply step on the edger, cut firmly into ground where the new edge is meant to be, then after tiring of that I bend to the task of peeling back the unwanted turf and weeds with the claw. And repeat. One caveat: This edging by essentially expanding the beds works great for many years, since your beds will probably want to get bigger, anyhow, as your gardening confidence grows and so do your plants. Eventually, however, you have to stop letting the beds expand. Rather than cut away excess, you’ll have to re-seed lost or damaged edges with grass seed, as I need to in some scruffy areas along the vegetable garden edge (bottom photo), where there are missing bits in the foreground to be patched. Tip: Sometimes I recycle wedges of turf extracted from another area to patch these divots, like mini-sod-laying. Very satisfying, like doing a jigsaw puzzle. The piled-up mulch near the rhubarb in that same picture was waiting to be spread on all the exposed soil surface, once the new edge was cut and patches sown. 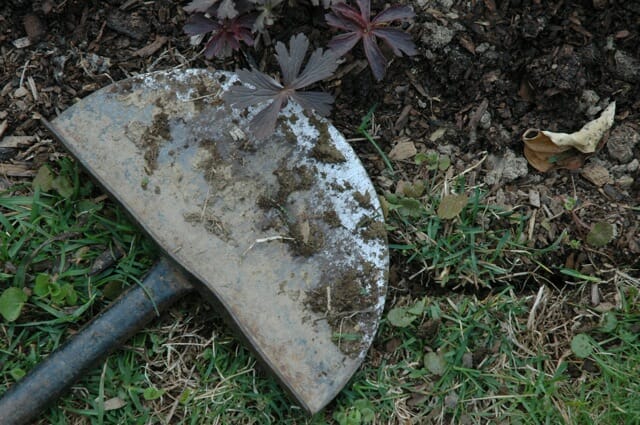 Every other mowing or so, clip the grass at the edges with a grass shears (either the stand-up or hand version). Combined with the occasional repeat with the half-moon edger to yank out errant bits here and there, it should keep things nice all season. I don’t use a weed whip; too noisy and violent for me.

A final tip: If I stayed ahead of plants like perennial geraniums that want to spill out and over the edge, smothering dollops of turf with their encroachment and messing up my lines, it would save a lot of patching later, making the task of edging more of a mere fine-tune here and there. Put that on my list of garden resolutions: Keep plants in bounds. Problem is, they never obey (and I get distracted, too). 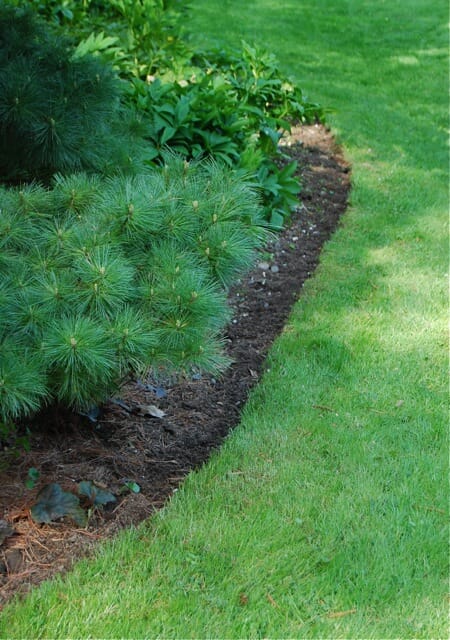 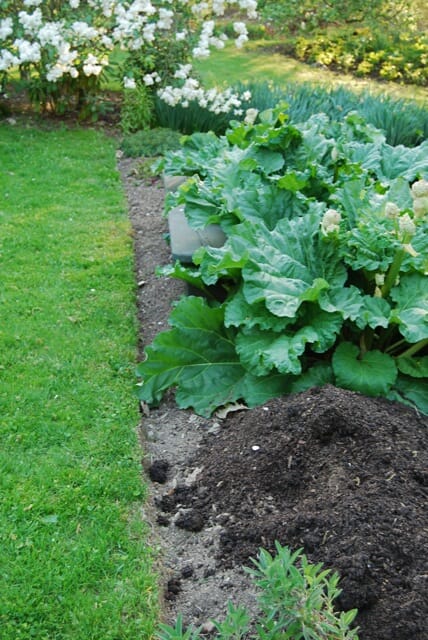 Categorieslawn care (organic)
Radio Podcasts
a way to garden podcast
Margaret's weekly public-radio show, from Robin Hood Radio in Sharon, CT, the smallest NPR station in the nation. Listen live at 8:30 AM EDT Mondays, to the replay Saturday morning, or stream the podcast anytime. LISTEN OR SUBSCRIBE FREE: Get the iTunes version; find it on the Stitcher app; or on Spotify, or your favorite podcast app. Browse past interviews below.
Podcast Archive

when ornamental and edible merge: foodscaping, with brie arthur

SOME OF US are horticultural segregationists, designating one area as the “flower garden” and another as the “vegetable garden” or the “herb garden,” and never..
Read More
o
July 2, 2012
30 Comments

overwhelmed? don't throw in the trowel!

AFTER A STEAMY ROUND OF EDGING, watering, weeding, mowing, mulching, I typed this on Facebook yesterday: “In a word: overwhelmed! Bringing the garden back to..
Read More
a
June 23, 2015
22 Comments

I HAVEN’T PULLED a starter cord all season, for which my tricky right shoulder thanks me. I haven’t needed oil or gasoline. But I’ve been..
Read More