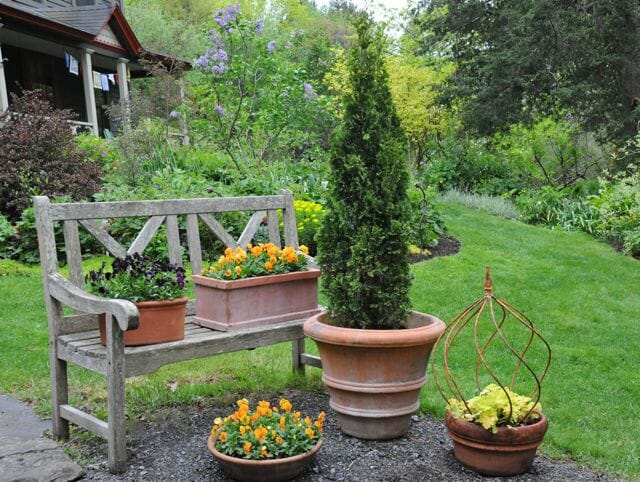 SOME PARAGRAPHS NEED PUNCTUATION, and my garden’s like that–in need of the occasional exclamation point, specifically.  So for the first time in 30ish years of gardening, I’ve gone and done it: adopted an evergreen “!” to help me state the case. My choice was a columnar American arborvitae, Thuja occidentalis ‘Degroot’s Spire,’ but there are others (especially if you garden in a slightly warmer zone than my 5B).  That’s it doing improvised temporary duty in a pot, above, while I figure out where it will really go.  More on the topic of vertical accents, in print or podcast:

THE MAY 7, 2012 EDITION of the weekly podcast I do with the nation’s smallest NPR affiliate, Robin Hood Radio in Sharon, Connecticut (WHDD), was on the topic of vertical accents in the garden, particularly evergreen ones. Stream it now, or subscribe free on iTunes or the Stitcher app. Enjoy!

This first-ever columnar conifer in my garden career came about quite by accident. I was actually looking for what a friend refers to as “a blob” (a sort of lumpy, wider-than-tall, hummocky-shaped shrub) to replace a Daphne ‘Carol Mackie’ that was badly snow-damaged last fall.

Shop as I might for the right new “blob,” I saw nothing that was just right. And then I bumped into another friend at the garden center, who said, “Why not something vertical instead? Change it up.” Aha!

SUCH COLUMNAR SUBJECTS would also be useful grouped for hedging, of course. A note when grown in pots as a specimen: If you leave a big weatherproof pot out in winter, the plant’s roots will have less insulation that in the ground (meaning they’ll be less hardy). Select something about two zones hardier than your actual zone for such exposed usage. Or plan to put them in an insulated shed or garage for the winter, which will cheat you a half-zone or a zone, in my experience. Here in Zone 5B I can overwinter a potted Zone 6A or maybe a 6B plant in my garage, but I wouldn’t count on even a 5B plant liking life out in the elements in a pot–a Zone 3 plant will make it, and a Zone 4 one might. Experiment, since each winter weather, plant, pot size and shelter makes for a different combination.

Categoriestrees & shrubs
Radio Podcasts
a way to garden podcast
Margaret's weekly public-radio show, from Robin Hood Radio in Sharon, CT, the smallest NPR station in the nation. Listen live at 8:30 AM EDT Mondays, to the replay Saturday morning, or stream the podcast anytime. LISTEN OR SUBSCRIBE FREE: Get the iTunes version; find it on the Stitcher app; or on Spotify, or your favorite podcast app. Browse past interviews below.
Podcast Archive

THERE IS ONE punctuation mark I shy away from in writing that I should, however, use more in the garden. That’s the exclamation point—which translates..
Read More
f
March 14, 2014
530 Comments

NEEDING TO FINE-TUNE your garden’s design, but not sure how to begin? Katherine Tracey of Avant Gardens helps us take a virtual walk through our..
Read More
s
February 12, 2017
13 Comments

FROM DEALING WITH stink bugs in the vegetable garden to making room for shrubs that lend more four-season structure in the perennial beds (like the..
Read More