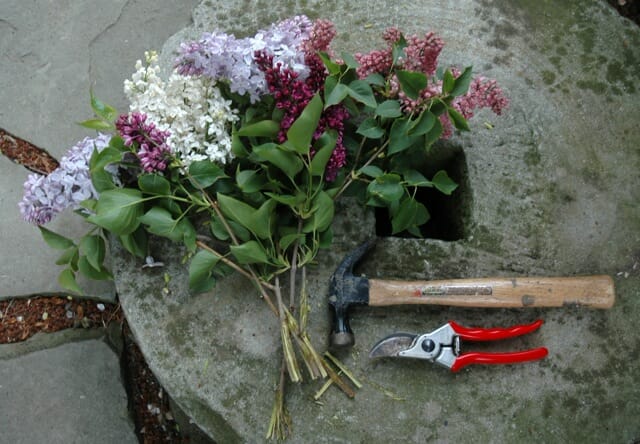 WHAT NOT TO DO IS AS IMPORTANT many times as what to do each season, the dont’s as powerful as the do’s. Nowhere is this more to the point than with pruning, the “there’s no turning around now” portion of horticulture, where you can’t glue it back on or wait a few weeks for another (forgiving) flush of foliage, as when you give a ratty perennial or annual a needed haircut. Are you feeling scissor-happy? Read this first.

Each May and June I’m asked, “Why didn’t my lilacs bloom?” only to find out in the next sentence that the questioners had literally nipped the plants in the (flower) bud with late summer, fall, winter or earliest springtime pruning, long after the new year’s blossoms had been set.

Early bloomers flower on old wood. Go out and look at a forsythia or a lilac: Unless you pruned in summer or fall, you’ll see flower buds already in place, dormant but there. If you prune now, it won’t flower now. Make sense?

Generally speaking, don’t prune spring-blooming shrubs and trees more than a month or so after they finish blooming. After flowering, prune immediately. You will typically not harm the plant by pruning a little later, but you will be deprived a season of bloom, so why not first enjoy it?

Woody plants that flower late in the season, such as Hydrangea paniculata, bloom on new wood. Again, go out and look. You don’t see any flower buds now, in early spring, do you? Bottom line:

Discovering where on the stems and when the plant creates its flower buds will help direct your pruning efforts.

LILAC pruning: Unless the shrub’s a neglected wreck in need of rejuvenation, cutting off bouquets of flowers is all the pruning you’ll want to do. I never prune them here in my Zone 5B climate after July 4, except to correct damage that might occur from weather, and like to finish up earlier. The details are here (and there’s a glossary of my favorite varieties, too).

VIBURNUM pruning: Less is more. Please don’t think of my favorite genus of shrubs (and great bird plants, too) as hedge material to shear and mutilate, or try to make a variety that wants to be 12 feet tall into a 6-footer. Many are large shrubs; make room, or select something else for the spot in your garden. Here’s the protocol. 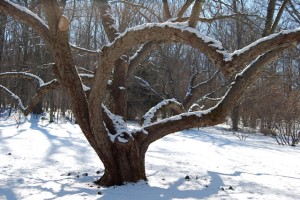 FRUIT-TREE PRUNING pruning is an exception among early bloomers: With apples and the like, including ornamental crabapples, what you’re working toward isn’t as much the pretty flowers as an architecture and openness that can carry and ripen maximum fruit. I prune in late winter, knowing those are apple blossoms-to-be I am cutting off.

Every year, remove all the water sprouts or suckers—thin, whip-like wood that juts straight up from the main limbs but could never support any fruit—with a folding saw or running shears.

Then there’s the hard part: taking out big branches. Step back and evaluate the tree, or even better take pictures and digitally “black out” the branches you think the tree would eventually be better without. How does it look now, “without” them?

The basic idea is to open the center to allow light and air circulation, and also to lower the crown if possible. Never remove more than one-third of the tree’s live wood in any year. It will take at least three years, therefore, to accomplish what you imagine when you “pruned” the expendable parts of the tree out of the snapshot.

When removing large branches, first reduce the weight of the limb by cutting off half of it. Then follow the 3-step-cut how-to here.

ROSES: If I had any (well, I have three, mostly R. rubrifolia that I grow for its blue foliage) I’d be on the alert right now, as winter transitions to spring. Many common kinds of roses are pruned when the forsythia blooms. Read how the pre-eminent rosarian of the day, ex-Brooklyn Botanic Garden rose-garden curator Stephen Scanniello, approaches it.

CLEMATIS: I like the ones that like to be cut back hard in spring, to about 18 inches (and frankly I treat a lot of others this way, perhaps delaying their bloom time but never seeming to kill them). But there is a more nuanced way: How to prune Clematis, with vine expert Dan Long.

WEIGELA: Some shrubs, including weigela, hate being cut back part way, and are better pruned thus: Remove a portion of the oldest stems near the base, to allow younger wood to develop fully. Weigela look a mess when cut back at midpoint, as do Buddleia. If the weigela has really outgrown its space, cut the entire plant to about 12 inches from the ground right after flowering (or earlier spring if you like, skipping the bloom) and it will regrow.

BUDDLEIA: Off with its head, now. Just before the butterfly bush’s buds want to break, cut the most familiar kind, B. davidii, down to near ground-level. Even though in some gentle winters it seems as if it will break higher up, it will look like a hell of a mess without a hard cutback, trust me.

TWIG dogwoods and twig willows: Grown for their colorful twigs (you can see some of mine in fall with golden crabapple fruit here), these tough creatures can be cut to near the ground every few years if they grow out of bounds, or you can thin selectively, removing some older stems at the base to let new ones come through. If their color isn’t as good anymore, give them a thorough cutback, or stooling, to promote younger more vibrant wood. Prune in late winter or earliest spring if needed.

HYDRANGEAS: I’m going to leave this hot topic for a whole separate story, but generally speaking, prune the mopheads (H. macrophylla, the big blue ones) after they bloom in summer, but before they set next season’s buds. How? Cut out the oldest stems to the ground to make room for new ones. This one’s a trickster to normal thinking, because though it blooms relatively late, in most varieties it does so on year-old wood, so it does carry flowerbuds over the winter. Deadheading is always allowed. 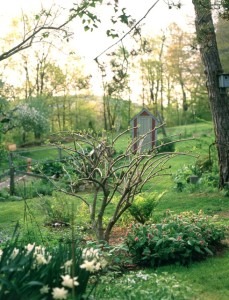 With Hydrangea paniculata, such as the Pee Gee (what we commonly call H. paniculata ‘Grandiflora’) and ‘Tardiva’ and other panicle types, a different thinking: They bloom on new wood. Prune them in late winter or early spring, just before new growth begins. (You can even prune in late fall, but I don’t like to do it until after winter has made its mess, in case branches are lost in storms.)

They can be cut back quite hard, and still make new wood that then gets buds and blooms. Or you can skip pruning altogether, if you like.

Where to place your cuts can be confusing. I have had ones I didn’t cut back enough turn to octopuses (octopi?) and really look a mess, and this is inclined to happen on older specimens that have been cut back again and again. I’ve also cut old ones back too hard and had to suffer through some gawky recovery years.

The “secret,” if there is one: To get a good-shaped plant, you will often be cutting back to a mixture of oldest (thicker) wood and younger (last year’s) wood, which is counter-intuitive. The pruned structure will look odd, but try to think only in terms of creating a framework for emerging shoots that will then be topped with flowers. Your cuts indicate to the plant where it should (please) sprout from. Let go of the fact that the wood you’re leaving will be of varying thicknesses, not some perfect-looking architecture.

As for the oakleaf types, H. quercifolia, I either don’t deadhead at all or if they need pruning I do it right after bloom–not later. If they are overgrown, take out some of the oldest stems at the base, as with the blue mopheads. When I used to grow H. arborescens ‘Annabelle,’ I cut her to the ground each year (like the panicle types, she blooms on new wood, so how much you prune is up to you).

Want to hear the contrarian position on hydrangea pruning? As with all gardening, part-art and part-science, here is one, and it’s from a very impressively credentialed individual, Dick Bir of North Carolina State University, whose point of view is summed up here.

AND THEN there’s just the matter of general pruning: Anyone can do at least a good job of basic pruning. Not doing anything is much worse than following these easy steps.

One time I never prune anything hard: in fall. Encouraging new shoots so late in the season is inviting damage to soft new tissue when frost comes. So I time all big rejuvenations for early to mid-spring. But each in its good time. Agreed?

Categoriesfor beginners pruning trees & shrubs
Radio Podcasts
a way to garden podcast
Margaret's weekly public-radio show, from Robin Hood Radio in Sharon, CT, the smallest NPR station in the nation. Listen live at 8:30 AM EDT Mondays, to the replay Saturday morning, or stream the podcast anytime. LISTEN OR SUBSCRIBE FREE: Get the iTunes version; find it on the Stitcher app; or on Spotify, or your favorite podcast app. Browse past interviews below.
Podcast Archive

EXCEPT IN THE warmest zones, where they are basically disinclined to bloom, every garden should include some common lilacs (Syringa vulgaris) or their various beautiful..
Read More
p
March 19, 2012
9 Comments

pruning time (in print or on the podcast)

LAST WEEK, BETWEEN edits on my next book, I gathered some friends and the proper tools and pruned–trying to erase more damage from last October’s..
Read More
q
November 12, 2013
21 Comments