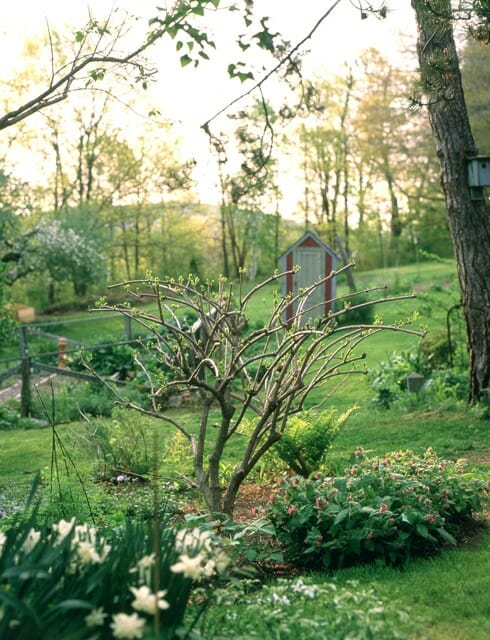 ONE OF GARDENING’S FEAR FACTORS (except to those who’ve totally mastered it, which doesn’t include me) is pruning, the way to get our woody plants into shape and keep them that way. I want to offer a version of pruning that’s so pared down that anybody can do it (even if you don’t yet have the kind of artistic vision that turns boxwood into crowing roosters, or reshapes a badly storm-damaged tree so well that nobody notices it was ever hit). All you have to do to be at least a B-plus pruner are these simple steps:

Take out the three D’s anytime they occur. The D’s are dead, damaged and diseased wood—and why wouldn’t you want to do this? (Some people say there are five D’s: dying and deformed being added to the list, but I’m trying not to get us overwhelmed.)

Take out all suckers and “water sprouts” as often as required. This means that mess at the base of a grafted shrub or tree that looks like a thicket of shoots surrounding the trunk. It also means those things that shoot straight up vertically off a branch at a 90-degree angle or thereabouts from the branch, very common on fruit trees, say, or old magnolias. Look at the architecture of these shoots: If you left them on, what would they turn into? (They’d turn into the disaster in the photo below.) Nothing very useful, or well-engineered. Don’t wait until you have a mess like this. Gone! 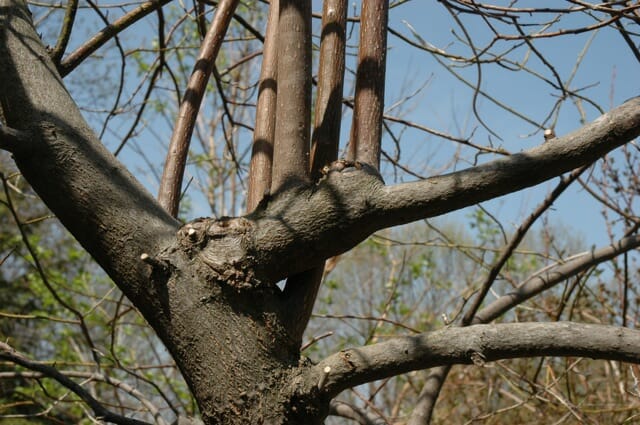 Similarly, if anything’s thinner than a pencil or turning inward in a way that looks like trouble, off with its head. Rubbing against another branch is no good, either. (Those are probably all in the D called deformed.)

We’ll get to the advanced intermediate stuff and maybe even some advanced stuff in time, but for now, can we all agree to be vigilant about those few simple steps? Our shrubs and trees will look all the more beautiful if we do.

Required equipment: A serious pair of shears, probably Felco’s; a folding hand saw (again, don’t get el cheapo, but Corona or Felco or ARS), and a long-arm pruner (I swear by my ARS 4-footer, and now there’s a telescoping 6-to-10-footer, too). A pair of serious loppers also recommended.

My entire Pruning FAQ page has even more advice to get you going.

Categoriesfor beginners pruning trees & shrubs
Radio Podcasts
a way to garden podcast
Margaret's weekly public-radio show, from Robin Hood Radio in Sharon, CT, the smallest NPR station in the nation. Listen live at 8:30 AM EDT Mondays, to the replay Saturday morning, or stream the podcast anytime. LISTEN OR SUBSCRIBE FREE: Get the iTunes version; find it on the Stitcher app; or on Spotify, or your favorite podcast app. Browse past interviews below.
Podcast Archive

IF THE BIG CHILL BACKS OFF A BIT MORE, I MIGHT GO PRUNE—at least remove the water sprouts that jut up vertically from branches of..
Read More
f
March 4, 2020
86 Comments

fear not! how to prune clematis, with dan long

ONE OF MY FAVORITE lines ever in a garden book: vintage Christopher Lloyd, the late daring plantsman of Great Dixter in England, in his Clematis..
Read More
f
February 24, 2009
25 Comments

TODAY DWARF AND SEMI-DWARF varieties of apples and other fruit trees are the norm, but when the half-dozen or so apple trees that remain from..
Read More