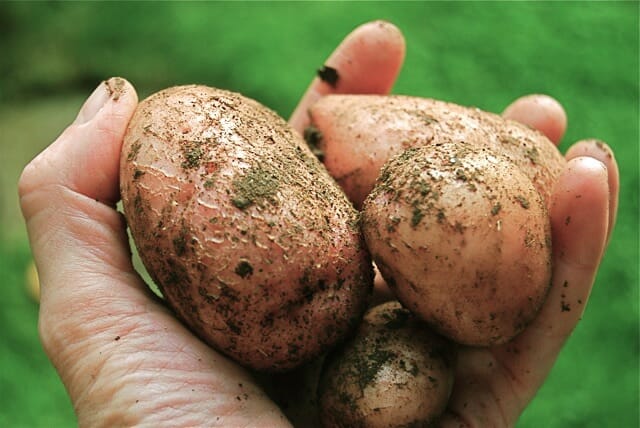 IFELT LIKE BAKED POTATOES TO GO WITH the green beans I was steaming up for dinner the other night, and at first lamented I’d forgotten to buy any, and then…aha! Out I went to the potato row, where the foliage is about half-withered, and stuck a hand down into the hilled-up soil to find my prey. Perfect for eating, but not ready yet for storage, it seems, so I’m leaving the rest, minus the occasional supper requirements, right where they are awhile longer. Here’s why, and what I’ll do at harvest time:

My hero James Crockett of the original vintage 1970s “Victory Garden” PBS fame said he just left the carefully dug tubers out on top of the former row for a few hours to dry a bit, then put them in burlap or mesh bags in a cool, dark place at once. Even with a few days of light exposure, the potatoes would turn green and inedible.

He didn’t bother with curing the crop, exactly, which is the more conventional advice today:

Dig when the soil is dry, not wet, after the foliage has died down. I normally leave them right in the ground until I am ready for them in late fall, long after the plants have faded, to reduce indoor storage time, hoping for a dry spell later in the year. 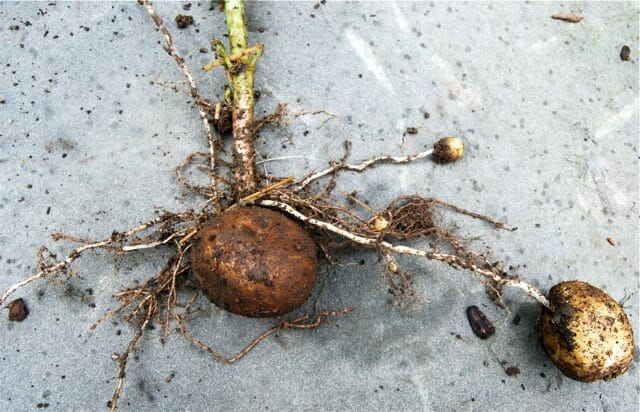 First, to gauge readiness, carefully dig a hill or two of potatoes, starting about a foot outside the hill itself and working inward, since potatoes can sprout on long roots nearly a foot to either side of where you started. (The “seed potato” from a hill I uprooted earlier, above, is the one at the end of the stem, sending off satellite roots to form more tubers.) They don’t really go deeper than planted, but go a bit sideways and even closer to the surface than the seed potato was placed. Exploring with your hands will guarantee no pierced or otherwise damaged potatoes; if you use a fork and any tubers get damaged, eat those first.

Check these first tubers: Is the skin thin and easily rubbed off, like mine (top)? Fine for eating, but not good for keeping yet; let them wait awhile longer underground; I’d check in another week.

Once harvest time is right for the rest, plan to put them in baskets or trays and cure them—unwashed, just as they come from the ground with any heavy soil clods brushed gently off—in a dark spot that’s counter-intuitively humid (like 90 percent) and between 50 and 60 degrees. Guess I’ll be turning off the dehumidifer in my very primitive Victorian-era basement, or using the space under the bulkhead door between outside and the basement perhaps, depending when I harvest. This treatment lasts for two weeks, and then they go into a colder spot for storage.

First cull any soft or bruised potatoes, or any showing signs of shriveling; one bad potato (like the apple of the traditional phrase) will spoil the whole lot. Longterm storage is also humid and ideally at 40 degrees and dark, with a tolerance range of 38-45 degrees. Close to 50 and they will start to resprout in a couple of months, and I think you know what happens to frozen potatoes. This is where a root cellar would be heaven, but not one shared with apples or other fruits that give off ethylene gas (which like too much warmth starts things growing).

And this is why I wait: My bulkhead or cellar won’t be cool enough for awhile for the storage phase, but if I time my digging right it will be 50-something falling to 40ish a couple of weeks after I dig. I suspect this is why Crockett “skipped” the formal curing: The space he used probably got cooler gradually as desired, without moving the crop again.

Some people have an extra refrigerator that they use as a root cellar by turning it up a few degrees; no room for that here. In slightly warmer climates, an unheated but insulated garage would suit.

Again, I’ll use the a spot in my cellar or bulkhead, which is cool enough come winter, but mouse-proof the stash first inside a big hardware-cloth mesh chest made from framing lumber with the mesh stapled on. Good air circulation is essential, despite the preferred humidity, so closing them in a plastic foot locker or some such repurposed device isn’t an option.

In years when I only grew enough for eating in the fall, I simply left the whole crop in the ground, under an extra mulch layer, and harvested once-weekly what I’d use, much as you would carrots or beets. Sometimes I’d miss a few tubers, which would surprise me and start growing again the next spring, or find themselves magically unearthed, in perfect condition, when I was out there planting my next round of potatoes.

growing potatoes organically: when and how to plant, hill and harvest

A FRIEND I BUY seed potatoes with and I were scratching our heads as we filled out the order form, blanking on the line where..
Read More
9
November 17, 2010
33 Comments

9 things i needed to learn about sweet potatoes

IKNEW THEY WERE ONE OF BABY’S FIRST FOODS, and one of nature’s most nutritious of all. But as a relatively novice sweet-potato grower, there were..
Read More
p
March 28, 2008
23 Comments

UNTIL I STARTED growing them more than a decade ago, I didn’t know the world of potatoes was anything more than simply baking, red, or..
Read More