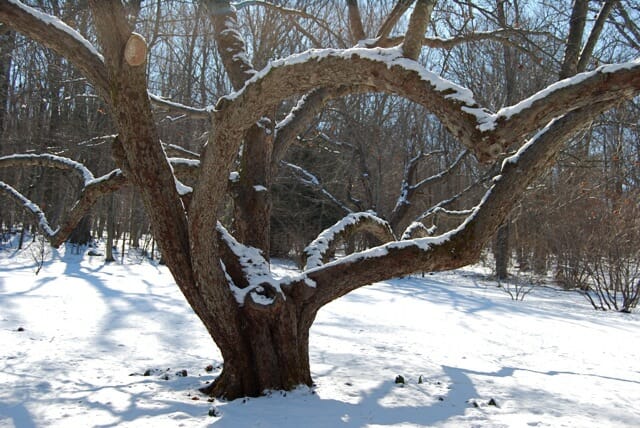 IF THE BIG CHILL BACKS OFF A BIT MORE, I MIGHT GO PRUNE—at least remove the water sprouts that jut up vertically from branches of older fruit trees and magnolias here, and will never amount to anything but a mess that casts shade and wastes energy. I thought I’d remind you to look for opportunities in your own yard to get at the first pruning tasks (and get out of the house), things like these:

Fruit-tree pruning, as mentioned in the February garden chores, is a perfect way to get a mid- to late-winter jump on things.

Cutting out infested Viburnum twigs loaded with viburnum leaf beetle egg cases before they hatch will reduce your problem with these tricky pests.

The three D’s of dead, damaged and diseased wood, can always go, no matter the month. Survey the yard for such wood anywhere, on any plant. Eliminate suckers at the base of grafted trees and shrubs, like crabapples, or on sucker-prone lilacs, for instance.

I’ll wait until next month, though, to stool twig dogwoods and willows that haven’t had a haircut in a couple of years. Hard pruning (also called coppicing, down near the ground) forces a fresh crop of colorful twigs.

Buddleia and other cutback shrubs will get their hard pruning then, too—probably late in the month, just before growth would begin.

I’ll also wait until March to prune the few roses I have; just around the time that the buds begin to show signs of swelling.

Categoriespruning trees & shrubs
Tags
pruning
Radio Podcasts
a way to garden podcast
Margaret's weekly public-radio show, from Robin Hood Radio in Sharon, CT, the smallest NPR station in the nation. Listen live at 8:30 AM EDT Mondays, to the replay Saturday morning, or stream the podcast anytime. LISTEN OR SUBSCRIBE FREE: Get the iTunes version; find it on the Stitcher app; or on Spotify, or your favorite podcast app. Browse past interviews below.
Podcast Archive

WHAT NOT TO DO IS AS IMPORTANT many times as what to do each season, the dont’s as powerful as the do’s. Nowhere is this..
Read More
m
November 30, 2009
18 Comments

THE PAUSE THAT REFRESHES: Gardeners, like their gardens, benefit from a bit of dormancy, and the time is upon us. Enjoy it. I’ve already shared..
Read More
m
December 1, 2010
11 Comments

IRAN AROUND THIS WEEK trying to remember what I had forgotten—hoses still on “live” taps, non-weatherproof pots still out in the weather—as the first string..
Read More