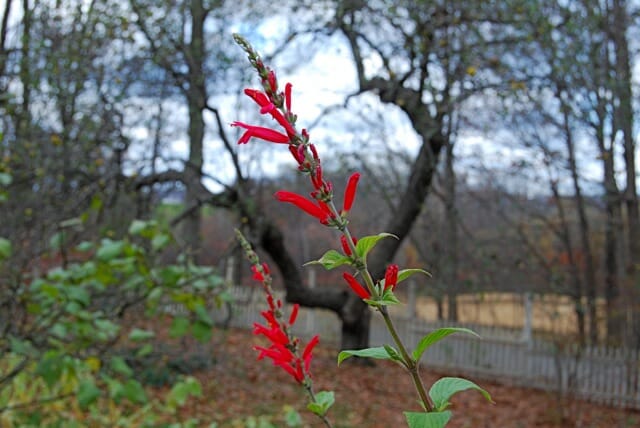 ISMILE AND NOD WHEN GARDENERS FROM ELSEWHERE tout pineapple sage (Salvia elegans) as a hummingbird plant. “Elsewhere,” as in wherever the plant blooms before the hummingbirds have been long-gone for six weeks, meaning decidedly not here. Yes, after probably 10 frosts, my pineapple sage decided to bloom the last week or so, even with its foliage all frost-tinged, brave soul that it is, sole survivor among the tender garden plants used as “annuals” here in 2009.

Flowers or not, I grow one pineapple sage plant each year because of its Jack-in-the-Beanstalk quality. A 3-inch pot containing a rooted cutting in May forms a shrubby 3-by-4-foot creature by high summer, and oh, the fragrance of those leaves—scenes of a sunny Hawaiian pineapple plantation in every stroke of the hand. 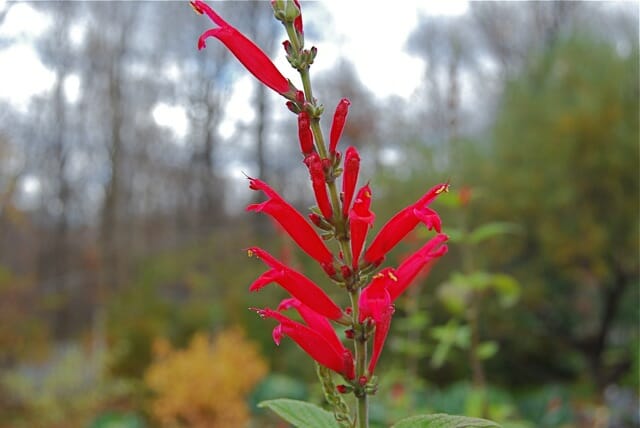 In areas where it does bloom before this anti-climactic moment (which it’s doing even with much of its foliage battered by the intermittent cold), pineapple sage and other late salvias are appreciated by migrating hummingbirds. (For summering ruby-throated hummingbirds here, Salvia van houttii, S. coccinea and some of the other reds are more to the point, along with many other tender things like verbena and nicotiana, and keep going long after the little birds move on.)

Pineapple sage is hardy to Zone 8ish, some say 9, but I say simply “not here.” Some gardeners even in Zone 7 (including this one who wrote a thorough article on it in “The Herb Companion”) report that they grow pineapple sage like a tender sub-shrub: that it’s root-hardy many years if heavily mulched, and then they cut it to near the base and let it regrow, not unlike I’d do with a Buddleia davidii.

Like its other mint family cousins, the plant’s foliage is edible, and I’ve known people to chop it into fruit salads, put it into teas, make jelly from it, and even blend it into smoothies and such. Do you grow Salvia elegans, and what do you do with yours (besides wait a very long time for it to start to bloom)?

Categoriesannuals & perennials herbs
Radio Podcasts
a way to garden podcast
Margaret's weekly public-radio show, from Robin Hood Radio in Sharon, CT, the smallest NPR station in the nation. Listen live at 8:30 AM EDT Mondays, to the replay Saturday morning, or stream the podcast anytime. LISTEN OR SUBSCRIBE FREE: Get the iTunes version; find it on the Stitcher app; or on Spotify, or your favorite podcast app. Browse past interviews below.
Podcast Archive

3 favorite salvias, all of them (screaming) red

THE LAST OF THE FEMALE HUMMINGBIRDS have just departed for points south, following the males who left well ahead of time as if to set..
Read More
g
November 15, 2009
30 Comments

gardening with bear (and other late arrivals)

I DIDN’T THINK ANYTHING COULD TOP SUMMER 2009’s appearance of the family of gray fox, or the Biblical-seeming abundance of serpents that were simply slithering..
Read More
f
August 23, 2014
30 Comments

GIVE ME A PLANT that looks otherworldly for many weeks in summer through fall, but is happy to sit in its pot, dry and sleeping,..
Read More